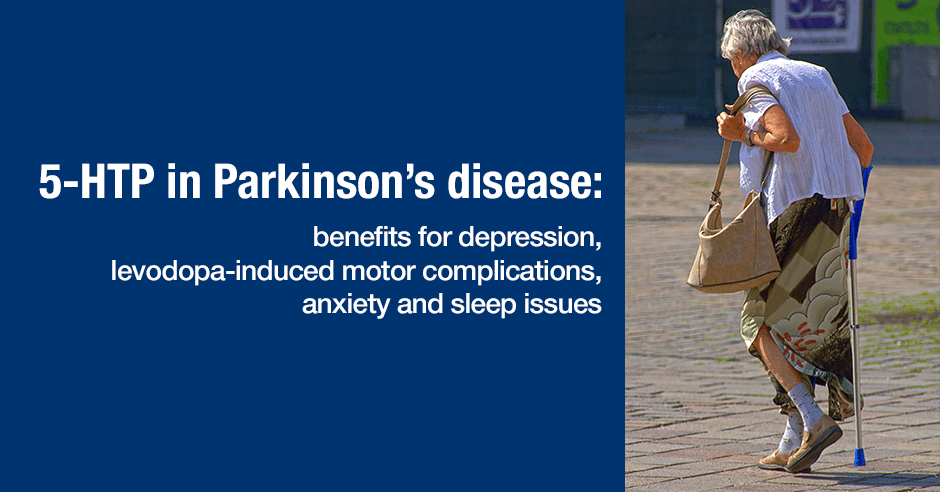 Research shows that the amino acid 5-HTP (5-hydroxytryptophan), the intermediate metabolite of tryptophan in the production of serotonin, offers benefits for Parkinson’s disease patients. It has been reported to ease depression and to reduce levodopa-induced motor complications. This was reported in two separate studies by the same research team at the University of Cagliari, Cagliari, Italy. They were small studies and considered preliminary. However, given what I know about the effectiveness of 5-HTP (for depression, anxiety and insomnia), I consider it a major step forward for Parkinson’s disease patients.

In this study, Efficacy and safety of 5-hydroxytryptophan on depression and apathy in Parkinson’s disease: a preliminary finding, 25 individuals with Parkinson’s disease were enrolled and “patients received placebo or 50 mg of 5-HTP daily over a period of 4 weeks”

The findings were as follows:

a significant improvement of depressive symptoms during the 50-mg 5-HTP treatment compared with placebo.

In this study 5-HTP was not shown to reduce apathy symptoms. This is not surprising to me, given that we typically see the amino acid tyrosine help with apathy symptoms associated with low catecholamines, rather than low serotonin.

In this study, Efficacy and safety of 5-Hydroxytryptophan on levodopa-induced motor complications in Parkinson’s disease: A preliminary finding, 12 Parkinson’s patients who were diagnosed with levodopa-induced dyskinesias (involuntary, erratic, writhing movements of the face, arms, legs or trunk) and motor fluctuations were included. Patients received placebo or 50 mg of 5-HTP daily over 4 weeks.

The findings were as follows:

a significant improvement of levodopa-induced dyskinesias during the 50 mg 5-HTP treatment.

The study authors make the serotonin-dyskinesias connection, stating that “Several studies have indicated that altered serotonergic neurotransmission may contribute to the motor features commonly associated with Parkinson’s disease drug treatment such as levodopa-induced dyskinesias.”

As reported in this paper, Spectrum of Non-Motor Symptoms in Parkinson’s Disease

Despite their significant clinical importance, the awareness of non-motor symptoms is quite negligible. Sleep disorders, gastrointestinal dysfunction, olfactory disturbances, anxiety, and depressive episodes are some of the most common non-motor presentations.

Given what I know about the effectiveness of 5-HTP in my clients with anxiety, low mood and sleep issues, I consider this research a major step forward for Parkinson’s disease patients who may also experience anxiety, depression and sleep issues.

5-HTP also improves focus and when to switch to tryptophan

I was surprised to read that it has been hypothesized that ADHD and Parkinson’s disease share “several overlapping anatomical and neurochemical changes.”

As you can see from these blog posts, in addition to boosting mood, 5-HTP also improves focus and ADHD symptoms:

One caution with 5-HTP is that it can raise salivary cortisol and cause a “wired-tired” feeling. When this happens we switch to tryptophan, always starting with a trial in order to figure out the ideal dose.

I find that using 50 mg of 5-HTP 1-3 times a day is a typical starting dose for my adult clients who have the low serotonin-type of anxiety (mental anxiety, worry, panic attacks, ruminations), low mood, insomnia, sugar cravings, irritability, PMS, anger issues and TMJ.

Keep in mind that in these 2 studies, 50 mg of 5-HTP was used only once a day, and everyone was given the same dose. There is never a one-size fits all approach with the amino acids and we adjust up or down based on symptoms, using a trial approach. I’d love to see this approach used with follow-up studies.

If you are new to the concept of low serotonin and the use of tryptophan or 5-HTP you will find this blog helpful.

Parkinson’s disease and GABA, flavonoids in parsley and insecticides

Here are some other useful blogs on Parkinson’s disease:

Have you or a family member with Parkinson’s disease used 5-HTP (or tryptophan) for easing depression and improving levodopa-induced motor complications?

Have you seen reduced anxiety, improved sleep, better digestion and better focus too?

If you’re a practitioner working with Parkinson’s patients have you used 5-HTP or tryptophan with success?