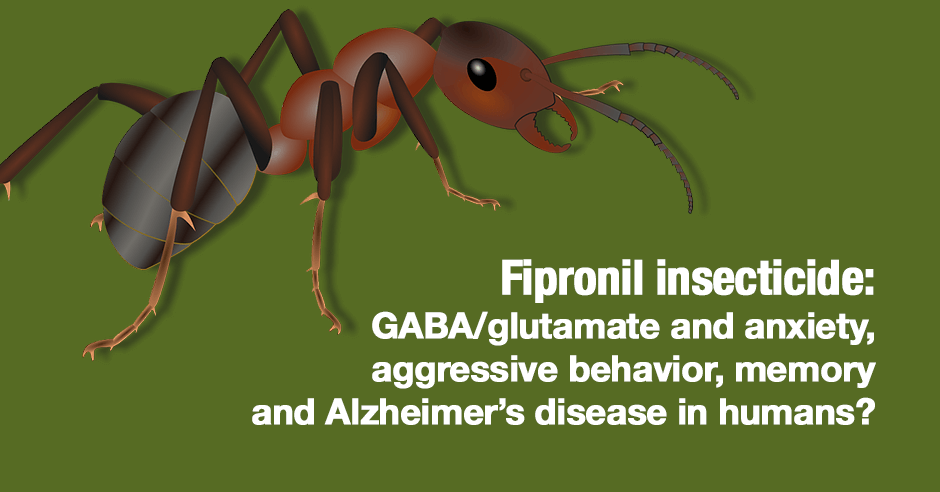 The insecticide called fipronil has me concerned because there is increasing evidence that it can be toxic to humans and, much to my surprise, I’ve just discovered that the main mechanism of action is by targeting the gamma-aminobutyric acid (GABA) receptor and recent research points to increased anxiety, aggressive behavior, memory problems and even Alzheimer’s disease in animal studies.

Based on a rather surprising conversation I had with someone a few weeks ago (let’s call her Sue), I felt compelled to get more information on fipronil. Before that I was not aware about the specific effects I mention above.

We were in Sue’s front yard and the dog kept sniffing these small white plastic squares in the flower beds. Sue kept pulling the dog away and I asked “why? what are those?” It turns out they were ant-bait devices. Yes, I’m this clueless simply because I’ve never purchased anything like this. I expressed my concerns about toxicity and possible endocrine/hormone effects but didn’t have enough concrete facts, so I went digging through the research. Needless to say I am very concerned with what I found.

What was equally concerning is that Sue had not even considered that it could be harmful. Looking into possible harms was not even on her radar. When pressed, Sue said “it’s only a small amount in each container so I’m sure it’ll be fine” and “the poison is inside the container so none of it will come out – so it’ll be fine.”

This is what went through my mind (which is pretty typical for me – I’m always in questioning mode): What is it and how toxic is it? Does it have impacts on humans and by what mechanism? Could it cause anxiety or increase existing anxiety symptoms? Are there additional concerns about it being in a flower-bed near the front door where you could possibly walk some into the house or breathe it in as you come and go?

act directly on the nervous system by inhibiting the neurotransmitter acetylcholine … [contributing to] … acute psychological and behavioral effects, such as anxiety, depression, and cognitive impairments.

The researchers also suggest that long-term psychological effects of low-level exposure have not been determined satisfactorily.

We hear less about insecticides such as fipronil

We hear less about insecticides such as fipronil and how they work.

It can be found in ant-bait and anti-cockroach products as well as Frontline Plus (tick and flea protection) for cats and dogs. You can find a partial list of products here and a fact sheet here.

Fipronil works to kill insects via the inhibition of glutamate- and GABA-activated chloride channels resulting in uncontrolled neural excitation. It also blocks GABAA receptor function and is typically considered toxic to insects but not humans.

As soon as I read the GABA-glutamate mechanism I started searching for anxiety and neurotoxic connections.

There are no human studies on increased anxiety due to fipronil exposure but research on zebrafish larvae exposed to fipronil at typical environmental levels, finds anxiety-like behavior.   In the paper, A metabolomic study of fipronil for the anxiety-like behavior in zebrafish larvae at environmentally relevant levels, the authors report decreased levels of glycine and serine with higher levels of glutamate saying fipronil may be a potential neurotransmitter disruptor. Here are some of the possible mechanisms they discuss related to this:

This 2016 paper lists a variety of toxic effects to both animals and humans: Fipronil insecticide toxicology: oxidative stress and metabolism:

because of accidental exposure, incorrect use of fipronil or widespread fipronil use leading to the contamination of water and soil, there is increasing evidence that fipronil could cause a variety of toxic effects on animals and humans, such as neurotoxic, hepatotoxic, nephrotoxic, reproductive, and cytotoxic effects

They explore oxidative stress as a possible mechanism as to how fipronil causes these toxic effects.

One of the questions I asked myself was this: Are there additional concerns about it being in a flower-bed near the front door where you could possibly walk some into the house?

It turns out that this may be a valid concern. In this 2016 paper, Conversion of pesticides to biologically active products on urban hard surfaces, the researchers report that urban landscapes that include concrete can actually convert pesticides to other biologically active and more toxic intermediates, likely caused by the alkalinity and metal oxides in concrete. They report that fipronil:

was quickly transformed to desulfinyl and sulfone derivatives, with the desulfinyl level exceeding that of parent in the runoff water only 1week after treatment. Fipronil derivatives have aquatic toxicity similar or even greater than the parent fipronil.

Impacts on memory and a possible factor in Alzheimer’s disease

This 2016 animal study, Memory impairment due to fipronil pesticide exposure occurs at the GABAA receptor level, in rats concludes that fipronil can

have toxic interactions with the CNS [central nervous system] of mammals and lead to memory impairment by modulating the GABAergic system.

We also have to ask how big a role this insecticide could be playing in Alzheimer’s disease? In a paper published earlier in 2018, Induction of Amyloid-β42 Production by Fipronil and Other Pyrazole Insecticides, they use the term “Alzheimerogens” when writing about insecticides such as fipronil and the metabolite fipronil sulfone:

Focusing on fipronil, we showed that some of its metabolites, in particular the persistent fipronil sulfone, also favor the production of Aβ42/Aβ43 in both cell-based and cell-free systems.

Fipronil administered orally to mice and rats is known to be metabolized rapidly, mostly to fipronil sulfone, which stably accumulates in adipose tissue and brain.

In conclusion several widely used pyrazole insecticides [such as fipronil] enhance the production of toxic, aggregation prone Aβ42/Aβ43 peptides, suggesting the possible existence of environmental “Alzheimerogens” which may contribute to the initiation and propagation of the amyloidogenic process in sporadic AD.

Why wait for long-term human studies?

Hopefully you’re like me and don’t buy ant-bait or roach-bait products.

My bigger concern is the wide-spread use of spot-on pet-care products which contain fipronil, exposing our beloved pets to this toxin and all the humans they come into contact with. Pet-groomers are especially cautioned. And I’d also add a caution for children playing with pets where these flea and tick products are used since “the developing brain is particularly vulnerable to the action of insecticides.”

We don’t know for sure how harmful this insecticide is for humans and it’s not clear what the mechanisms are – GABA-glutamate and/or glycine and/or oxidative stress – but why wait for long-term human studies, especially given that chronic and long-term effects are difficult to investigate and based on what we already know about their effects on Parkinson’s disease, amyotrophic lateral sclerosis, and depression.

This is especially the case if you already suffer from long-term anxiety, insomnia or another chronic health condition as it may be one more possible contributory factor.

Given that fipronil blocks GABAA receptor function, I have to wonder if chronic long-term exposure could play a role in difficulties with benzodiazepine tapering.

If this is old news to you feel free to share with family and friends who may not be as informed as you.

If this is news to you, I hoping this gets you thinking and questioning. I’d love to hear your thoughts, concerns and questions.