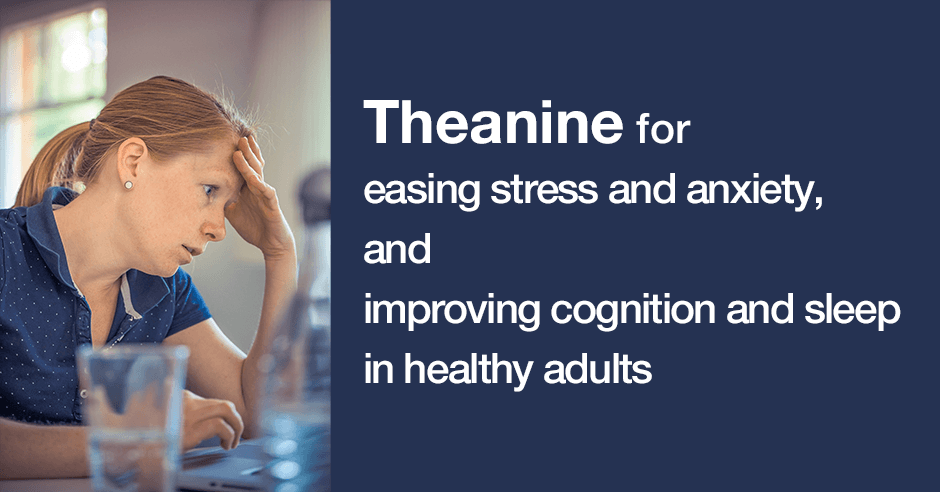 L-Theanine is a “unique non-protein amino acid found in green tea” which according to the study below, has shown benefits when used short-term or acutely as a supplement for it’s anti-stress effects, reducing anxiety, improving sleep quality, improving cognition and even easing depression.

This 2019 study, Effects of L-Theanine Administration on Stress-Related Symptoms and Cognitive Functions in Healthy Adults: A Randomized Controlled Trial, aimed to examine the effects of four weeks use of l-theanine:

on stress-related symptoms and cognitive functions in healthy adults. Participants were 30 individuals (nine men and 21 women; aged 20-69) who had no major psychiatric illness.

The trial was randomized, placebo-controlled, crossover, and double-blind.

L-theanine (200 mg/day of Suntheanine), was used by study participants before going to bed each night and was used for four-weeks.

Study participants who used the theanine for two weeks observed the following:

Our findings suggest that L-theanine has the potential to promote mental health in the general population with stress-related ailments and cognitive impairments.

The authors also note that “there were no significant adverse events, demonstrating the safety of four weeks of L-theanine administration.”

As expected, the participants saw increases in serum theanine concentrations. What is unusual and inconsistent with previous studies, is the fact that there was “no significant effect on cortisol or immunoglobulin A levels in the saliva or serum.” I’m not sure I understand  the reasoning they propose i.e. that “the reduction of salivary cortisol and immunoglobulin A levels may be short term, recoverable effect of L-theanine administration.”  I’ll be digging deeper into this to try and get a better understanding of these differences.

Some of the reported possible mechanisms of action

Here are some of the reported possible mechanisms of action of theanine from some studies referenced in his paper:

Theanine or GABA – which one to use when?

I typically start my clients with a trial of GABA Calm for low GABA symptoms like physical tension, stress and overwhelm, panic attacks and insomnia. If we are not getting all the expected benefits with GABA and there is a need for added cognitive benefits then we’ll consider adding theanine too. Some folks find one works better than the other and some like a combination (at the same time or theanine in the day/GABA at night or GABA in the day/theanine at night).

I recently reached out on facebook asking: “Theanine or GABA? Which do you prefer for anxiety and why? How much helps? And any other benefits (like reduced body pain, better thinking/cognition, easing IBS gut pain, reduced cravings, less negative self-talk etc)?Or do you like a combination of both?”

As you can see from these varied responses it’s a matter or trialing both to find what works for each person’s unique needs:

You can find my favorite GABA/theanine combination product, a theanine-only product and my most popular GABA products on the supplements blog here (and with details for how to set up an account for my online store)

Nutritional Fundamentals for Health GABA-T SAP: 300mg GABA, 150mg theanine. This is pleasant-tasting when opened on to the tongue and works very well when GABA Calm can’t be used.

Pure Encapsulations L-Theanine: 200mg theanine. This is also pleasant-tasting when opened on to the tongue. Unlike like GABA, it can also be swallowed.

Source Naturals GABA Calm. This is a pleasant-tasting sublingual product that is my most popular and most effective form of GABA I use with my clients. It can be used in conjunction with theanine.

Enzymatic Therapy GABA: 250 mg GABA. This is also pleasant-tasting when opened on to the tongue and works very well when GABA Calm can’t be used. It can also be used in conjunction with theanine.

Please let us know … theanine or GABA: which do you prefer for anxiety and why? How much helps? And any other benefits (like reduced body pain, better thinking/cognition, easing IBS gut pain, reduced cravings, less negative self-talk etc)? Or do you like a combination of both?”