Grainflammation – How Grain Consumption Contributes to Anxiety and other Mood Disorders

Gluten is notorious for damaging the gastrointestinal tract.  I know iron, in the literature,  has always been reported as the most common most deficiency in gluten sensitivity. In my 15 years of practice, measuring both ferritin as well as iron panels and vitamin B12 levels, I see B12 being much, much more common as a deficiency in those with gluten sensitivity. The most common side effect of B12 deficiency, beyond fatigue, is actually anxiety.

The second barrier is called the right junction, which we know gluten can cause a disruption in tight junctions. This was discovered by Alessio Fasano at Harvard. He actually discovered it while he was at University of Maryland Celiac Research Facility. He discovered these tight junctions were disrupted and dismantled as a result of gluten exposure.

We also know bacterial infections can disrupt these barriers. We also have some evidence that show that glyphosate in Roundup and other chemical artificial pesticides and herbicides can disrupt this gastrointestinal barrier.

We discussed lipopolysaccharides (LPS) and how they

can create a lot of inflammatory reaction, and they can contribute to a breakdown in the blood brain barrier

Here is a recent paper on LPS and anxiety and depression: Early prenatal exposure to LPS results in anxiety- and depression-related behaviors in adulthood

In addition, LPS mice had reduced serotonin and noradrenaline levels in the hippocampus

Here is the blood brain barrier paper discussed – The blood-brain barrier in neuroimmunology: Tales of separation and assimilation

Dr. Eva Selhub MD, author of Your Health Destiny and Your Brain on Nature, is interviewed by host of the Anxiety Summit, Trudy Scott, Food Mood Expert and Nutritionist, author of The Antianxiety Food Solution.

How to Heal Anxiety with Nature and the Body, not just with the Mind

Listen to your body’s whispers before they become screams

We are always looking for a state of balance or relief

Oxytocin, the trust molecule, is necessary for survival of the species

Here is my oxytocin blog I mentioned: Oxytocin and social anxiety, pyroluria and depression?

We know that low serotonin can cause anxiety, worry and depression and research shows there are interactions between oxytocin and serotonin levels.

I loved the discussion about getting out in nature. This 2011 study titled: Effect of forest environments on human natural killer (NK) activity found that visiting forest parks found:

enhanced human natural killer (NK) activity, increased anti-cancer proteins, such as perforin, granzymes A and B, and granulysin in NK cells, and reduced the level of stress hormones in both male and female subjects

this effect lasted for more than 30 days after the trips, suggesting that visiting a forest park once a month is beneficial

Here is another paper we mentioned: Is love of nature in the US becoming love of electronic media? 16-year downtrend in national park visits explained by watching movies, playing video games, internet use, and oil prices.

This advice was smart: if you’re working and can’t out in nature, get a plant for your office or use a tool like Calm.com, a very cool online tool I recently discovered.  It’s not nature but may help until you can get into nature.  You can pick what nature scene you like and then pick the meditation duration.  I love it! 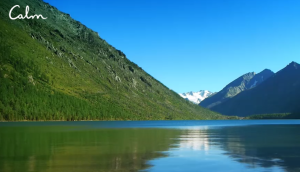 Here are the books we mentioned:

Your Brain on Nature: The Science of Nature’s Influence on Your Health, Happiness and Vitality (with Alan Logan) 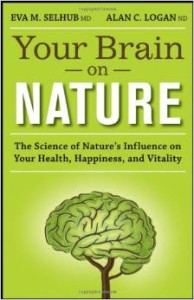 The Love Response: Your Prescription to Turn Off Fear, Anger, and Anxiety to Achieve Vibrant Health and Transform Your Life 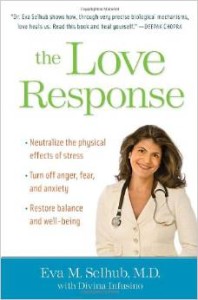 Your Health Destiny: How to Unlock Your Natural Ability to Overcome Illness, Feel Better, and Live Longer 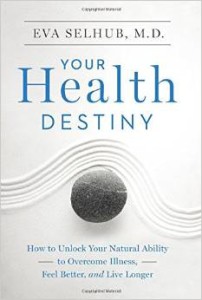 Get sample preview chapters from Your Health Destiny 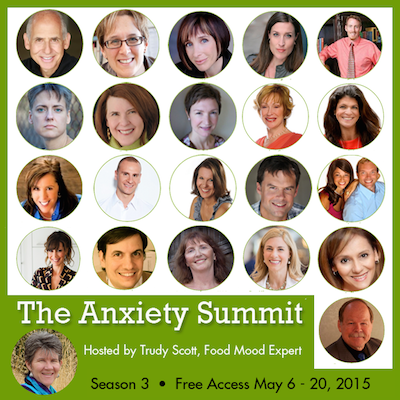 The Anxiety Summit (a virtual/online event) kicks off on Wednesday May 6 at 9am PDT. It will run thru May 20 with 2 speakers per day available for viewing at no charge. AND WE HAVE ALL NEW TOPICS!

Julia Rucklidge PhD, Professor of Clinical Psychology in the Department of Psychology at the University of Canterbury, Christchurch, New Zealand, said this during our interview titled: “What if… Nutrition could Treat Anxiety and Depression?”

How long is it going to take our society to pay attention to the research that shows that suboptimal nutrition is contributing to the epidemic of mental illness? Are we just going to sit around and ignore this evidence to our peril? Or are we going to start paying attention and start to invest in the really important research that needs to happen?

Dr. Peter Osborne DC, author of Glutenology, said this during our interview titled “Grainflammation – How Grain Consumption Contributes to Anxiety and other Mood Disorders”

A lot of people don’t realize that corn has a form of gluten – the one that has been the most studied is called zein. This is very disturbing to me as there are several studies that show that corn gluten causes inflammation in patients with celiac disease…and can actually cause villous atrophy. These studies are largely ignored.

You can now see all the incredible speakers and topics at www.theAnxietySummit.com. This will be over 25 hours of top-notch anxiety nutritional solutions from people I have hand-picked! Plus 3 talks I will be doing on new research, amino acid and pyroluria troubleshooting, 60+ nutritional causes of anxiety and the supplements I recommend. ALL NEW TOPICS!

If you have any questions about how any of this works feel free to ask here:
https://www.everywomanover29.com/blog/anxiety-summit-season-3-speakers-topics

“See you” on the summit! I’m looking forward to all your great questions and feedback!

Designed for the medical doctor, alternative medicine practitioner, and the public, the 2nd Annual SIBO Symposium features the nation’s leading experts on the topic to present an evidence-based educational program on managing small intestine bacterial overgrowth.

Small intestine bacterial overgrowth (SIBO) is a chronic bacterial colonization of the small intestine.  These bacteria normally live in the gastrointestinal tract, however, in SIBO they have overgrown in a location not meant for so many bacteria. The bacteria interfere with our normal digestion and absorption of food and are associated with damage to the lining or membrane of the small intestine. These mechanisms in turn lead to myriad other disorders—gastrointestinal, systemic, and neurological.

I’m planning to attend and look forward to hearing from these experts.

I recently had the pleasure of interviewing Dr. Allison Siebecker on The Anxiety Summit and really look forward to learning more from her and meeting her in person.

You can register for the SIBO Symposium 2015 here 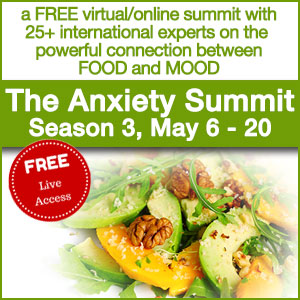 The Anxiety Summit: May 6 – 20, 2015
Nutritional Solutions for Anxiety
Hosted by Trudy Scott,
Food Mood Expert and Nutritionist, author of The Antianxiety Food Solution.

Here are all the speakers, their topics and blog posts with additional information, links to studies and more.  Each speaker title below links to the respective speaker blog.

Julia Rucklidge PhD, “What if… Nutrition could Treat Anxiety and Depression?”

Rebecca Katz MS, “Your Brain on Food: The Science and Alchemy of Yum for Alleviating Anxiety!”

Dr. Eva Selhub MD, “How to Heal Anxiety with Nature and the Body, not just with the Mind”

Dr. Jill Carnahan MD, “Is Toxic Mold the Hidden Cause of Your Anxiety?”

Magdalena Wszelaki, “Foods to balance your hormones and ease anxiety – part 1 and part 2”

Dr. Benjamin Lynch ND, “How Methylfolate can make you Feel Worse and even Cause Anxiety, and What to do about it”

Trudy Scott CN, “Pyroluria, Amino Acids and Anxiety: Troubleshooting when you are not getting results”

Dr. Kim D’Eramo DO, “How to use MindBody Medicine to Reverse Anxiety in 3 Minutes or Less”

Lebby Salinas, The Fooducator®,  “How Gluten Elimination Healed Me and Eliminated my Anxiety”

Dan Stradford, “My Anxiety Story and the Message of Hope We Offer“

Want these incredible interviews for your learning library? or did you miss the summit?

Purchase the season 3 MP3s or MP3s + transcripts and listen when it suits you.

Remember don’t tolerate how you feel. You deserve to feel your absolute best, and you can and should feel on top of the world always. You can completely eliminate your anxiety symptoms. Don’t give up hope, and just keep looking for answers until you have zero anxiety ~ Trudy 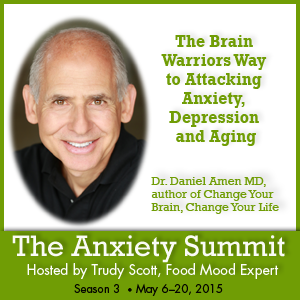 Dr. Daniel Amen MD, is well recognized as the brain doctor and this is the title of our interview on season 3 of The Anxiety Summit: “The Brain Warriors Way to Attacking Anxiety, Depression and Aging.” 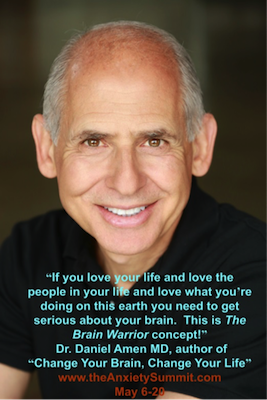 He just has so much wisdom:

There is a path to keep your brain much healthier than most people every thought possible! Neurons don’t age, it’s blood vessels that age and if you understand that and can keep the blood flow to your brain healthy, it directly attacks ADD, anxiety, depression, obesity and Alzheimer’s disease.

And a great sense of humor too! We had many laugh out loud moments which are always good for us but especially great when we’re feeling sad, anxious or overwhelmed.

We talk about how important the microbiome and gut health is when it comes to mental health.   He finds it funny that as the brain doctor, he now going to have to consider poop! He really does say that!

You may recall my great interview with Dr. Ted Dinan on season 2: Microbes in the gut and psychobiotics as a potential treatment for anxiety and depression

We also talk about how women make less serotonin so I just had to look up the research. Here are some snippets from this 1997 paper “Differences between males and females in rates of serotonin synthesis in human brain”

The marked difference in the rates of serotonin synthesis between male and female subjects is, to our knowledge, a new finding.

Moreover, no differences have been found between the number of serotonin re-uptake sites in the brains of male and female subjects.

Averaging over the different brain areas, the rate of serotonin synthesis is 52% greater in male than in female subjects. This is one of the largest differences between the brains of males and females that is not related to hormone binding sites. The reason for this difference is not clear at this time. 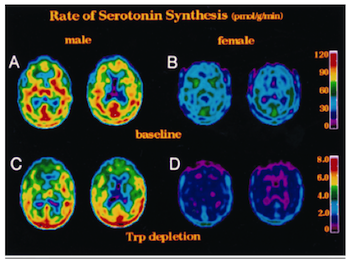 We can tie this all back to the gut since we make so much serotonin in the gut!

As Dr. Amen says “you need to get serious about your brain” and here a few of his recommendations:

Here are some of Dr. Amen’s wonderful books: 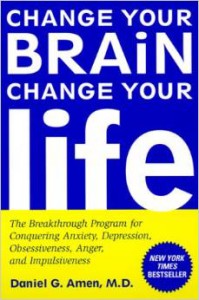 Unleash the Power of the Female Brain: Supercharging Yours for Better Health, Energy, Mood, Focus, and Sex 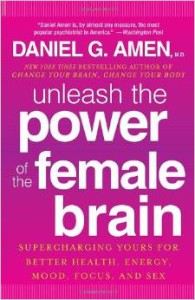 To survive and thrive, you must become a brain warrior, because without a doubt you are in a war for the health of your brain. 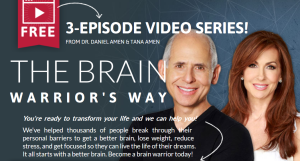 Join us on season 3 of The Anxiety Summit (www.theanxietysummit) and hear Dr. Amen share more on “The Brain Warriors Way to Attacking Anxiety, Depression and Aging.”