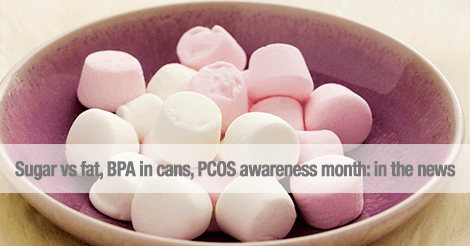 Sugar vs fat, BPA in cans, and PCOS awareness month are all in the news this month so here are some links to more information on each of these topics.

This shocking NPR article covers this new paper about the sugar vs fat debate: 50 years ago, sugar industry quietly paid scientists to point blame at fat

In the 1960s, the sugar industry funded research that downplayed the risks of sugar and highlighted the hazards of fat, according to a newly published article in JAMA Internal Medicine.

The article draws on internal documents to show that an industry group called the Sugar Research Foundation wanted to “refute” concerns about sugar’s possible role in heart disease. The SRF then sponsored research by Harvard scientists that did just that. The result was published in the New England Journal of Medicine in 1967, with no disclosure of the sugar industry funding.

It’s hard to believe that researchers would do this! The worst part is that this type of thing is still happening. You can read some of Marion Nestle’s commentary at the end of the above article.

At least now research sponsors do have to be disclosed so we are hopefully getting better at preventing this type of thing. We must always look at who funds a paper. 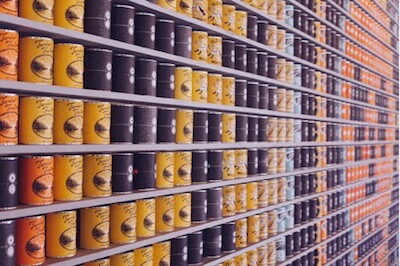 A study published in the journal Environmental Research on Wednesday not only reveals that consuming canned foods can expose our bodies to BPA, it pinpoints the worst offenders.

The study suggests that canned soups and pasta can expose consumers to higher concentrations of BPA than canned vegetables and fruit – and although those foods are tied to BPA concentrations, canned beverages, meat and fish are not.

BPA stands for bisphenol A, it’s a chemical that is found in plastics and it behaves in a very similar way to estrogen in the body. Because of this it’s called an endocrine disrupter and has an impact on depression, ADHD and anxiety.

An animal study published in 2015, Hypothalamic-pituitary-adrenal axis hyperactivity accounts for anxiety- and depression-like behaviors in rats perinatally exposed to bisphenol A reports

It’s unfortunate they didn’t get a commentary from the Environmental Working Group which has a great short Guide to BPA. 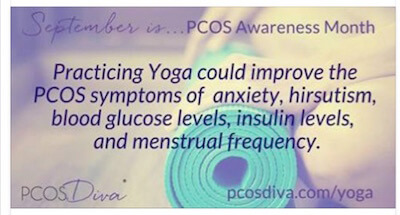 September is PCOS awareness month and here is some wonderful information on yoga for anxiety and PCOS, from my friend and PCOS expert Amy Medling at PCOS Diva. I’m such a big fan of yoga for stress and anxiety but had no idea it could improve these PCOS symptoms:

Yoga can reduce anxiety symptoms, reduce mFG score for hirsutism, improve menstrual frequency, insulin values and more according to a 2012 study. For more about the benefits of yoga for women with PCOS check out this blog post: 5 Reasons Why Yoga is Beneficial for PCOS

In case you’re not familiar with PCOS, Amy shares this overview on her site

PCOS Polycystic Ovarian Syndrome (PCOS) is one of the most common endocrine disorders found in women, affecting approximately 10% of women worldwide, with less than 50% of them diagnosed. The syndrome is present throughout a woman’s life from puberty through post-menopause and affects women of all races and ethnic groups. Women with PCOS wrestle with an array of possible symptoms including obesity, irregular menstrual cycles, infertility, depression [and anxiety], acne, and hair loss. Far reaching health implications such as increased risk of cardiovascular disease and diabetes make these already stressful symptoms even more daunting.

What do you think? Are you shocked about the sugar study discovery? Do you already avoid BPA? Do you have PCOS or know someone who has PCOS? Dr. Kim D’Eramo, DO, author of The MindBody Tool Kit, is interviewed by host of the Anxiety Summit, Trudy Scott, Food Mood Expert and Nutritionist, author of The Antianxiety Food Solution.

Dr. Kim shared how at osteopathic school you learn how the body and mind are related and how that has a direct impact on health and the body’s ability to heal itself.

Dr. Kim shared about women she has worked with whose kids have struggled with anxiety or behavior problems and how having the mom do the mindbody techniques led to the kids no longer having night-terrors and anxiety. I found this section so fascinating.

Most of us live in the sympathetic state of fight or flight and that means your stress hormones are high all the time. You can’t metabolize nutrients, you gain weight, you develop allergies and you no longer have the big picture ability to make little changes to make your life easier, You’re in survival mode and not relaxation mode. This leads to heart disease, inflammation, anxiety and it affects your thyroid and overall hormonal balance.

Here is the Brazilian civil servant heart disease mood study I mentioned: The association between mood and anxiety disorders, and coronary heart disease in Brazil

The association with CHD [coronary heart disease] is greatest in those with psychiatric comorbidity, while associations were also observed in MDD [major depressive disorder] and generalized anxiety disorder without comorbidity

Dr Kim says this about the broccoli pose (don’t you just love that name?):

According to my friend, Matt Sanford (he trains yogis all over the world) this simple yoga pose is like “Broccoli for your emotional body.” You literally cannot feel depressed after being in this pose.

I recommend it daily for 5 minutes. Life-changing!

It decreases stress hormones, and inflammation that causes disease, AND it’s shown to increase “healthy hormones” like endorphins and oxytocin, that make you feel a sense of confidence and self-worth

What mindbody tool have you used today?  I just did the broccoli pose and loved it!