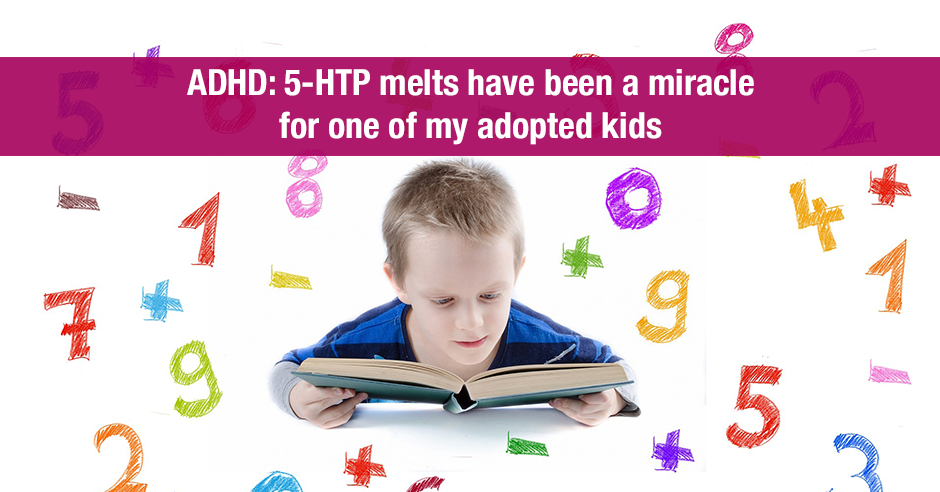 A mom in my community responded to an ADHD blog sharing how 5-HTP melts have been a miracle for one of her adopted children – after one week! 5-HTP is not where I typically start with ADHD so I quizzed her to get more details and then went looking for the research to understand the mechanisms. This blog shares her rationale for using 5-HTP, the truly wonderful results her son experienced, some of the research and some possible serotonin/dopamine mechanisms. This is what she posted:

5-HTP melts have been a miracle for one of my adopted kids. He had lots of trauma and off the charts ADHD. 5-HTP is better than methylphenidate (Ritalin) and we are now weaning off the non-stimulants.

Just 80mg 5-HTP in the morning is all he needs. He was super ADHD, he had a para (teacher’s aide) in public school for years to keep him on track and this year at a school for ADHD the teachers were complaining that he was never on task.

Now after a week it has changed his life. I am so thankful for the anxiety summit. Thank you Trudy

This is truly wonderful to hear! I responded saying how thrilled I was to hear the impact it was having and asked why this mom decided to try 5-HTP? This amino acid, which is a serotonin precursor, is not typically my first choice for alleviating ADHD symptoms. I consider low GABA (and using GABA) or low catecholamines (and using tyrosine), together with dietary changes, blood sugar control, and assessing for low zinc, low iron and low omega-3s – as a starting point.

I wanted to know if he had low serotonin symptoms such as the worry, ruminating, and obsessive type of anxiety which could have possibly been driving the ADHD symptoms? Were there any other symptoms that were a clue that low serotonin may be a factor: insomnia (with fatigue the next day impacting focus) or sugar cravings in the afternoon/evening (causing blood sugar swings affecting focus and mood)?

This was her response about why she used 5-HTP and which low serotonin symptoms he had:

We have tried all the amino acids over the years. I tried 5-HTP this time because SSRIs were the only class of medication he has not tried. I thought maybe it was worth a try and I also found this study: Comparative study of efficacy of 1-5-hydroxytryptophan and fluoxetine in patients presenting with first depressive episode (where the therapeutic efficacy of 5-HTP was considered as equal to that of the SSRI fluoxetine).

As for cravings or insomnia: he is a kid who loves sugar so I’m not sure if it’s a craving or typical. He takes 0.3mg of melatonin each night because guanfacine, the non-stimulant, prevents the production of melatonin.

She also mentioned that she has followed me for years and that DPA, an endorphin-boosting amino acid, works for her. She is a dietitian and shares my handouts and blog posts with her clients, so she clearly felt comfortable experimenting with the amino acids with her son.

I also asked which product they were using and how she landed at 80mg. She wanted a fast-acting supplement that would dissolve in his mouth and purchased Natrol 5-HTP:

They are 100mg but we are breaking off a little because he was falling asleep in class.

I reminded her that 5-HTP (or tryptophan) is typically best used late afternoon and evening so if someone is falling asleep in the day I’d switch to bedtime dosing.  If he needs it during the day for the ADHD symptoms then reducing the dose is the smart thing to do.

I love the sublingual/melt aspect of this product for quick results and because children do so well with a product that tastes pleasant.

However, I do not recommend this particular product because of very mixed ingredients information online. I have not seen the bottle of the actual product used but some of the online information states the product is gluten-free and soy-free and yet other information states it does contains gluten and soy. In some places they state it contains sucralose and an artificial flavor and in other places you see xylitol and natural flavor. This is all rather concerning. I’ll update this section as soon as I can confirm.

What does this mean for this mom? Now that she has figured out that 5-HTP helps her son, it’s best to find a better quality product so as not to cause other problems.

There are two chewable products in my online supplement store that come close to this product:

Both of these contain theanine. Research shows that theanine reduces anxiety and improves cognition via “improvements in verbal fluency (especially letter fluency) and improvements in executive function (planning, multi-tasking etc).”

The research on 5-HTP and tryptophan for ADHD

This paper, The effects of 5-hydroxytryptophan on attention and central serotonin neurochemistry in the rhesus macaque, shares that

Individuals with depression and anxiety typically experience impaired executive function and emotional cognition, symptoms that are generally studied by examining disruptions in attention.

This study used 5-HTP as an intramuscular injection, rather than using it orally but the authors did report the following:

This paper, Does serotonin deficit mediate susceptibility to ADHD? summarizes the role of serotonin in ADHD, the interplay with dopamine and the use of oral tryptophan (a serotonin precursor similar to 5-HTP):

I appreciate this mom for giving me permission to share here on the blog so we can inspire hope (and I wish for more and more improvements for this young boy):

My son is a 10-year old RAD (reactive attachment disorder) kid that was meth exposed and adopted at 3 years old. 5-HTP has worked so well. He has not thrown a fit in a month. Before fits were a daily occurrence. This might give hope to other parents.

Have you found that 5-HTP (or tryptophan) helps/helped you or your child with ADHD symptoms? If yes, do you feel the ADHD was caused in part because of anxiety and/or fear and/or feeling inadequate and/or perfectionism and/or poor sleep (all signs of low serotonin)? Or were the main symptoms poor focus, low energy, low motivation and depression caused by low catecholamines/low dopamine? Or a mixture of both?

If you’re a practitioner working with children or adults with ADHD, have you had good results with 5-HTP or tryptophan?