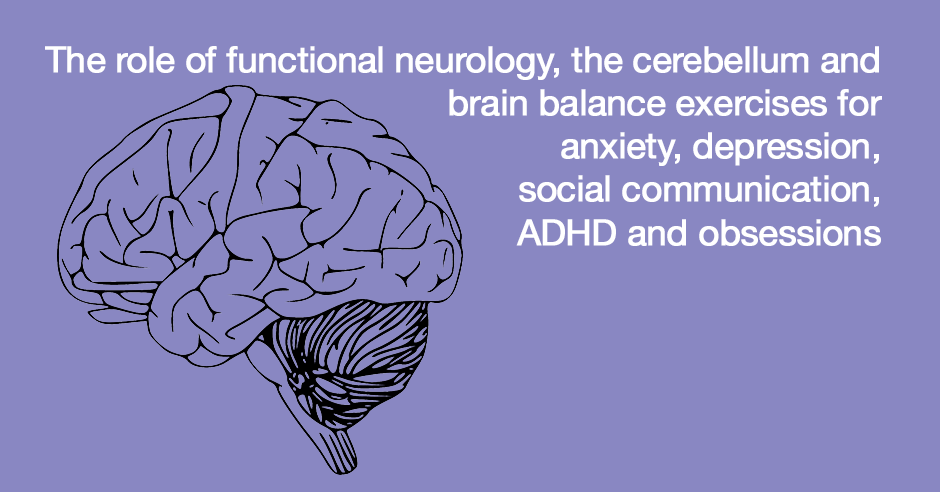 Here are some snippets from a fascinating interview sharing cutting edge information on functional neurology and the cerebellum on the Autism, ADHD and Sensory Processing Disorder Summit

Dr. Peter Scire, DC covers: How to Induce Neuroplastic Change in Your Teenager and Make it Fun. He shares how brain hemisphere imbalances and misfiring can be assessed and corrected with very specific exercises to induce neuroplastic change (in both children and even adults).

I want to bring attention to, really what Schmahmann calls the cerebellum cognitive affective syndrome, so CCAS. It’s been in the literature now for 20 years. And now he’s developed a way to actually do a checklist and to look at these different aspects. But ultimately what he’s saying is that the cerebellum networks have huge relationships to your cognition of executive functions: like working memory, linguistics (your ability to generate language and to actually comprehend language), your affect, so your mood and your emotional stability. Being able to not only generate emotions, but also be able to receive emotions.

These are things that we thought for a long time were at the higher center of the brain, more of the frontal lobe specifically….. But again, the more that we’re looking at the neuro anatomy through neuroimaging, we’re able to really say, guess what? There are certain pockets of the cerebellum that specifically drive these networks.

He talks about the 3 major parts of the cerebellum, 10 subparts and how 5 of these subparts actually deal with non-motor aspects (i.e. mood and emotions, ADHD etc.). It’s this latter aspect – the non-moto aspects – that is not recognized in mainstream neurology and that forms the some of the central aspects of functional neurology:

And so we can have dysfunction in those systems. But again, most of the clinical model has always been looking at brain to cerebellum, not cerebellum back to the brain. And I think in my experience over the last 15 plus years, most of the work in functional neurology has actually been centered around, even chiropractic per se has been centered around cerebellum to brain, but we now are even getting more specific with our therapeutic entities.

Again, when you look at the different phases of his work, you want to look at executive function – the whole ADHD population. You look at the linguistic processing. Obviously, we know language and social communication for autism spectrum disorders. Looking at spatial cognition so visual spatial information, visual memory aspects. Then you can begin to look at not only mood, and emotional aspects, but also relationships, obsessions, compulsions, anxiety and depression.

You can watch the video snippet of the above here

Dr. Scire shares the research published by Dr. Schmahmann. In this paper, The neuropsychiatry of the cerebellum – insights from the clinic they discuss the behaviors that they witnessed and that were described by patients and families:

He also recommends Dr. Robert Melillo’s book: Disconnected Kids: The Groundbreaking Brain Balance Program for Children with Autism, ADHD, Dyslexia, and Other Neurological Disorders (my Amazon link). I’ve skimmed it and will be doing a review –the functional neurology information is brilliant. I’d love to see the dietary information expanded upon.

In this interview you will learn…

I also had the pleasure of speaking on a panel with Dr. Scire and Dr. Leila Masson last week – you can watch this here. We discuss some of the above and a great deal more

I learned so much from his interview and our panel discussion and will be delving into this aspect of functional neurology in order to add this element for clients who need this support beyond nutrition and functional medicine.

If you’re new to my work and the targeted individual amino acids be sure to catch my interview: Self-care strategies for parents that are stressed out, anxious and depressed – without using medications.

Using the targeted individual amino acids (such as tryptophan, GABA and DPA) provides quick relief from anxiety and overwhelm, giving my clients hope from day one.  And then we start to dig deeper for other root causes which can often take some time.

In this interview my focus was for stress and overwhelm support for parents but the use of amino acids is very applicable to children (and was the topic I covered in my interview in the first season).

As I learn more I expect to find that the amino acids used in conjunction with functional neurology is going to provide more comprehensive results for many individuals who also have cerebellum dysfunctions.

This event brings together 30+ of the leading doctors, nutritionists, and researchers working to help parents by sharing the latest information and strategies for achieving recovery for children with Autism, ADHD and Sensory Processing Disorder.

If you have (or a loved one has) anxiety, depression, OCD,  social anxiety, anger issues and other behavioral symptoms this event is one I highly recommend. Alzheimer’s disease, dementia and Parkinson’s disease are also covered in Dr. Scire’s interview.  This information has a wider application than autism, Asperger’s syndrome, ADHD and SPD and you will learn a great deal.

If you’ve benefited from functional neurology and these brain balancing exercises please do share in the comments. Feel free to post questions too.