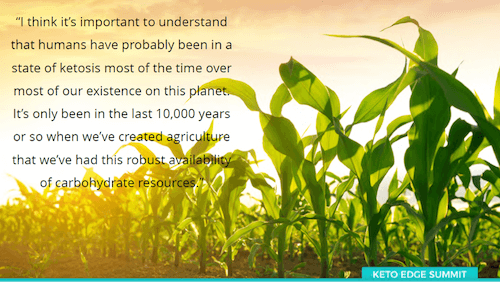 We know that ketones help you burn fat for energy, powerfully reduce inflammation and show promise in preventing and eradicating diabetes, cancer, autoimmune and neurodegenerative diseases like Alzheimer’s and Parkinson’s, and even play a role in mental health conditions like anxiety and depression. Experts on the Keto Edge Summit share many of the brain and mood benefits of a ketogenic lifestyle.

Dr. David Jockers shares this about anxiety and GABA and glutamate (his #5 benefit) in his interview on the ‘Top 7 Benefits of a Ketogenic Lifestyle’:

We have an epidemic of depression and anxiety in our society. And so, one of the key things that being keto-adapted does—not only does it downregulate inflammation in the brain, and we know that depression now is really neuroinflammation.

So the other big thing is we’ve got these neurotransmitters. One is glutamate; the other is GABA. Glutamate is an excitatory neurotransmitter, meaning that it helps us think sharply and quickly. What balances glutamate is this other neurotransmitter called GABA, gamma-aminobutyric acid. And it’s inhibitory. It helps balance us and calm us. What we find is that people with anxiety, they have high glutamate, low GABA. They don’t have a good ratio. Same thing with depression.

Blood sugar regulation is pivotal as it relates to the destiny of your brain. Probably the most important biometric that determines whether you will or won’t become an Alzheimer’s patient is what your fasting blood sugar is today.

Even with the ApoE-4 gene, the ketogenic diet, physical exercise, and gluten-free, lowering sugar and carbs… are important changes that can absolutely rewrite your book.

I think it’s important to understand that humans have probably been in a state of ketosis most of the time over most of our existence on this planet. It’s only been in the last 10,000 years or so when we’ve created agriculture that we’ve had this robust availability of carbohydrate resources that has really shifted the human diet to one that is carbohydrate-based as opposed to fat-based.

So when we see markers of oxidative stress high, not only do we know the DNA is suffering but we know our mitochondria, our powerhouse is suffering and, therefore, our brain is suffering. And so what you see is a high 8-OHdG – you see that high in conditions like Alzheimer’s or Parkinson’s but you even see it high in depression or bipolar or anxiety. What you also see is a ketogenic diet, helps to lower that. What you also see is adding more antioxidants, helps to lower that. So again, we’re back to our green leafies with our good fats.

The Keto Edge Summit is available online and there are REPLAYS ALL WEEKEND. You can still register here to hear the replays

Please share your gems and what you’ve implemented or are planning to implement in terms of a ketogenic lifestyle. 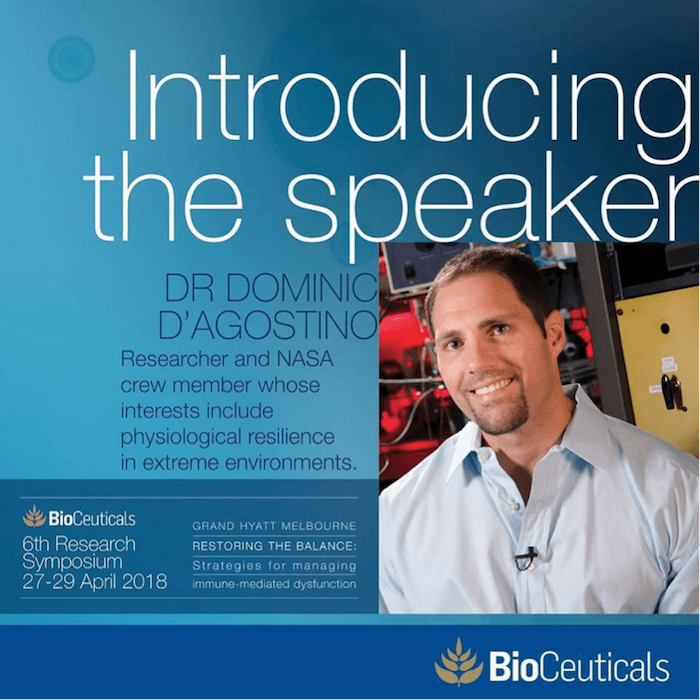 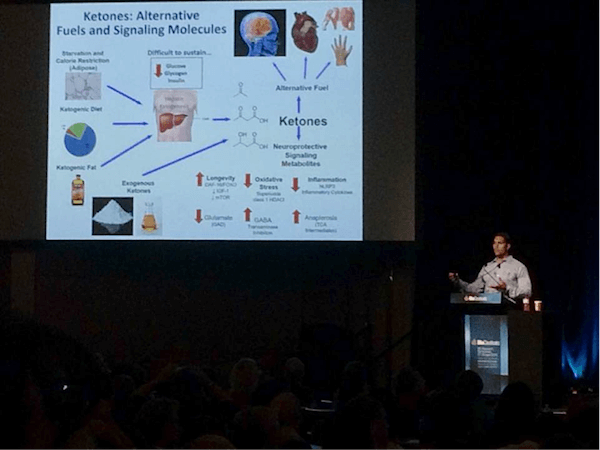 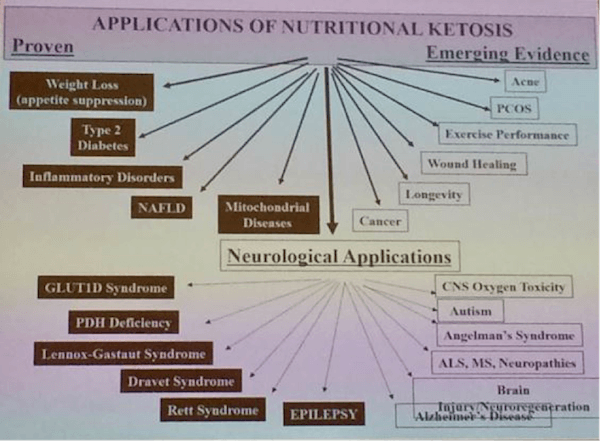 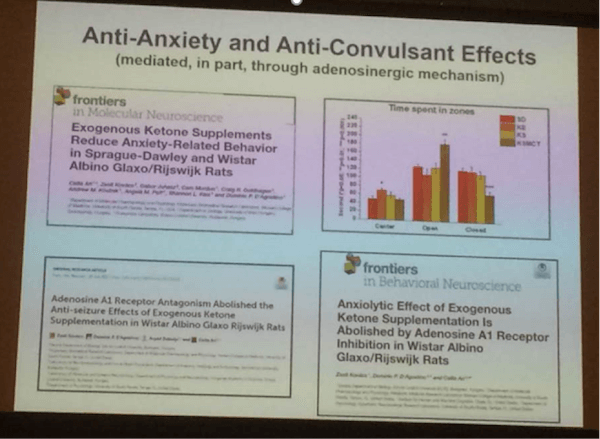 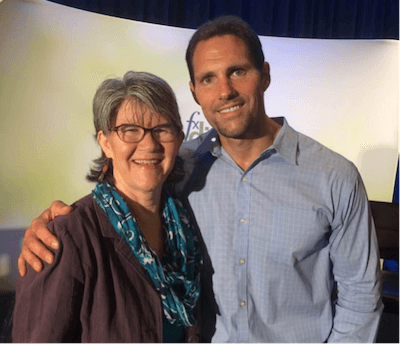 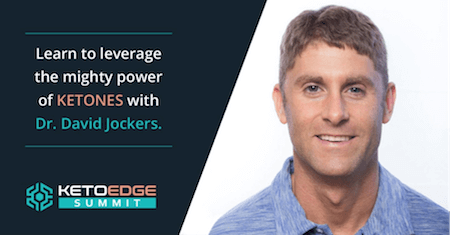 I wasn’t aware until recently that “KETO”, “Ketones” “Keto diet”, “Ketogenic lifestyle”, “Ketosis” and “Ketogenic diet” are some of the MOST SEARCHED terms on the internet today.

But there is a good reason for this and host of  The Keto Edge Summit (which runs from May 7-13, 2018), Dr. David Jockers shares this:

The goal of the ketogenic lifestyle is to adapt the body to utilize FAT as its primary fuel source instead of SUGAR.

For our ancestors, eating three meals a day just wasn’t a thing. Instead, they’d hunt and forage for the foods they could find. When there wasn’t food, they wouldn’t eat.

Sometimes they’d go for days without food. To sustain life during times of scarcity, the body is thought to have developed the ability to utilize fat as an alternative fuel source.

Today, there’s an abundance of food available to most of us at all times. We regularly eat three meals per day with intermittent snacking between them.

This kind of frequent eating, along with an overemphasis on carb-rich and sugary foods, causes a REDUCED ability to burn fat. Because we don’t have to hunt or forage for food; we’ve become “sugar burners.”

As these sugar-laden foods damage our bodies, we rely MORE on sugar and lose the ability to produce ketones – as a result, massive blood sugar spikes, inflammation, hormone imbalance and ultimately many of the chronic diseases that plague us today.

In a traditional nutrition course, you’d learn that sugar is the body’s PRIMARY fuel source, while fat is secondary. What we’ve learned now (and so much research is supporting this) fat can be a healthier and more sustainable source of energy. 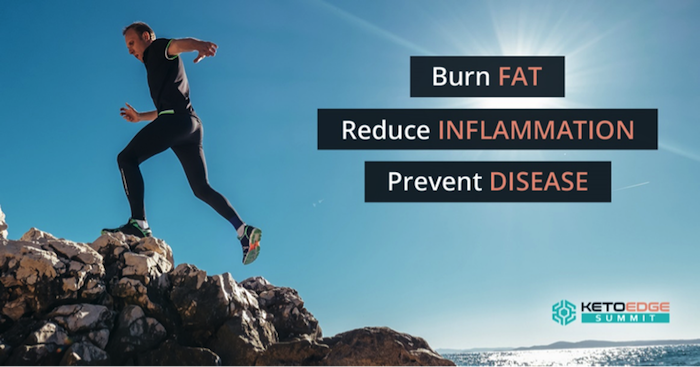 Ketones help you burn fat for energy, powerfully reduce inflammation and show promise in preventing and eradicating diabetes, cancer, autoimmune and neurodegenerative diseases like Alzheimer’s and Parkinson’s, and they can even play a role in alleviating symptoms in mental health conditions like anxiety, depression and schizoaffective disorder.

One of the amazing speakers on the summit is Dominic D’Agostino, researcher and Associate Professor at the University of South Florida. I attended the Bioceuticals conference in Melbourne this past weekend and had the pleasure of hearing him present on this topic live and all I can say is wow! I don’t want you to miss out and now you don’t have to when you tune in via the Keto Edge Summit.

Here is one of the slides where he shares the many proven and emerging applications of nutritional ketosis:

I shared these case studies a few weeks ago in a blog post – Ketogenic diet: reductions in auditory hallucinations and delusions, better mood and energy, and weight loss. Two schizoaffective patients working with Dr. Chris Palmer, a psychiatrist from Harvard’s McLean Hospital in Belmont, Massachusetts, tried a ketogenic diet for weight loss:

There is also research reporting the following results:

the patient’s behavior and intellect improved in regard to hyperactivity, attention span, abnormal reactions to visual and auditory stimuli, usage of objects, adaptability to changes, communication skills, fear, anxiety, and emotional reactions

ketone supplementation may represent a promising anxiolytic strategy through a novel means of inducing nutritional ketosis.

The GREATEST health discovery of this century may ALREADY be inside your body!

During this health summit, you’ll discover:

The Keto Edge Summit is online and available at no-cost from May 7-13, 2018! Register here

I will be in learning mode with you for the Keto Edge Summit. I’ve been following Dr. David Jockers for awhile and I’m very excited about the applications of a ketogenic diet for anxiety and depression, given what we’ve learned so far. It’s going to be a great educational opportunity for all of us.

Have you experienced benefits from a ketogenic diet? If yes please do share what benefits?

If you’ve had challenges being on a ketogenic diet please share those challenges too, so we can all learn.