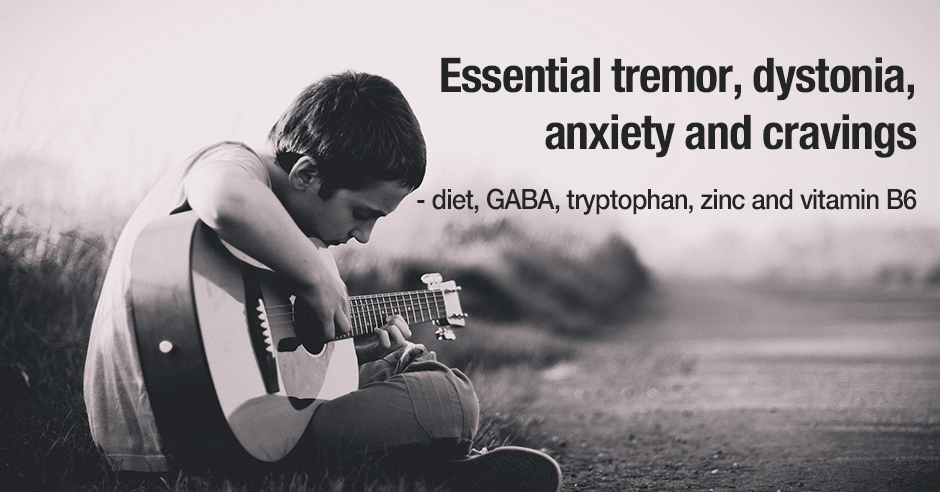 Today I’m sharing how diet, GABA, tryptophan, zinc, vitamin B6 and other B vitamins can resolve essential tremor and sugar cravings in 2 months, and also resolve musician’s dystonia and social anxiety within 4 months.

According to Medical News Today essential tremor is a movement disorder that can cause hand tremors and “is among the most common movement disorders.” … “The tremor usually affects both sides of the body, but it may be more noticeable in the dominant hand. It tends to occur when the person is moving as well as when standing still. Genetics may be responsible for around half of the cases of essential tremor.”

This Croatian paper, Treatment of Essential Tremor with Multi-Modal Nutritional Therapy in a Teenage Patient, reports the “case of a 13-year-old boy with [essential tremor] causing severe functional impairment” over the previous 2 years.

“A multi-modal nutritional therapy approach” was used to target three possible areas that could be contributing to the tremors: a poor diet that was high in sugar, low GABA levels and low serotonin. These changes were implemented:

(ii) GABA (through oral supplementation) and

The papers states: “After two months of therapy, his tremor decreased significantly and he regained normal function.”

Once the essential tremor resolved, this teen was able to resume his plans to pursue a musical career as a guitar player (which had been put on hold due to the tremor and his inability to play). What wonderful results!

I’m thrilled to see tryptophan and GABA being used for this condition and am really pleased to read this case report.  Here is my commentary on the supplements and doses he used for anyone wishing to try and replicate this nutritional approach (keeping in mind there is no one-size-fits-all).

Anxiety and low mood was not mentioned so I don’t know if they were factors.

It appears sugar and carb cravings were very likely a factor given that his normal daily diet contained “large amounts of refined sugars (chocolate, cake, biscuits, ice cream, etc).” The amino acids would have helped him with those cravings.

With regards to his diet, given how common movement disorders are with gluten issues, I would also consider I gluten-free diet which has been shown to have an adverse impact on neurotransmitter levels and B vitamins. Could gluten have triggered these nutritional deficiencies and the tremors?

And now to share a very similar case in an adult male … with a different and yet related approach.

Dystonia and hand tremors – and the pyroluria connection

This same Medical News Today article also describes dystonic tremor/dystonia as a movement disorder that can also cause hand tremors, stating that “the brain sends incorrect messages, resulting in overactive muscles, abnormal postures, and sustained undesired movements. Young adults and those in middle age are most likely to develop dystonic tremors, which can occur in any muscle.”

If you’ve been reading my recent articles on pyroluria (the pyroluria-vagus nerve connection and the introversion-pyroluria-loneliness connection) I’m sure you’ll be be interested to learn that there appears to be a strong link between pyroluria and focal musician’s dystonia (or musician’s cramp) in some individuals.

As you read in the blog above, Jay, also a guitar player, had to put his professional music career on hold due to musician’s dystonia. He also happened to have social anxiety and he started to notice improvements in his anxiety and tremors within the first 2 weeks. At the end of 4 months of being on the pyroluria protocol, he shared this:

I think it is, at this point, safe to say that the pyroluria treatment [120mg vitamin B6 and  60mg zinc) is, at least in my case, the cure for pyroluria and dystonia. 90%+ of my symptoms have disappeared, I am working extensively on repertoire and I am thinking about getting back into performing.

He says his experience was “akin to rebirth as a musician and also as a person.” How wonderful is that to read. Jay’s musician’s dystonia resolved and so did his social anxiety.

The outcome for the teen and Jay were similar and yet the approaches used were seemingly very different. This isn’t actually the case since zinc and vitamin B6 are co-factors that are needed to make GABA and serotonin.

Do you experience tremors, or have you been diagnosed with essential tremor or dystonia (or know someone who has)? And have you considered a nutritional approach?

Do share if you’ve seen success with either of the above approaches, and also experienced reduced anxiety or felt more social?