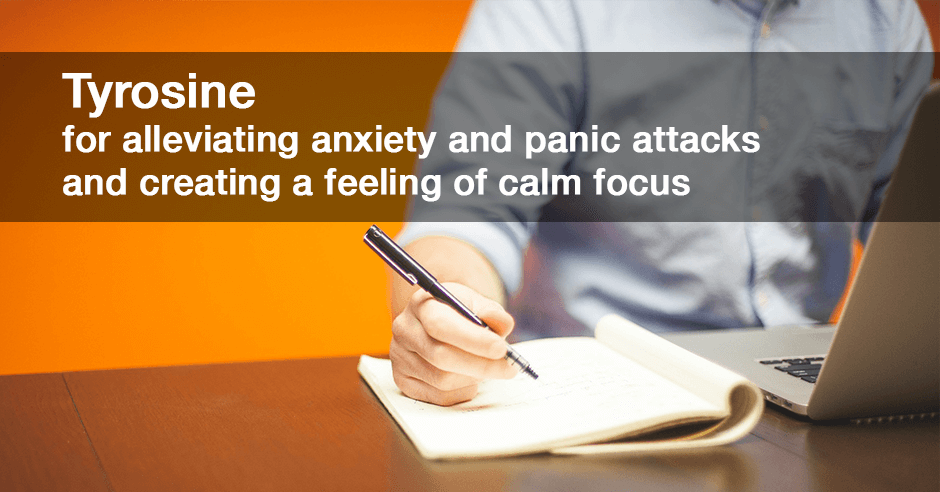 However, for some individuals addressing low catecholamines with tyrosine is the best approach to take, even if it feels counter-intuitive. Since everyone is different using the trial method is the best way to figure out what you need.

Here is another success story from someone using tyrosine, as shared in the comments on a recent blog post on tyrosine:

Tyrosine for anxiety has done wonders for me! I have tried GABA and Tryptophan. The GABA seemed to take the edge off a little when panic attacks occurred but wasn’t keeping anxiety from occurring.

I have been under tremendous pressure at work. The internal stress has been overwhelming! I haven’t been able to remember anything, even things I’ve done for years! I am in the process of learning new software at work. In the very first class my mind just went blank. The more I tried to focus the more stressed I became. All I could do was sit and stare at my screen while the rest of the class moved forward.

In short order I developed a migraine and panic. The internal pressure felt as if someone was wringing out my brain like one would do to a wash rag! I had to leave the class earlier. From this point on I was struggling to even do my job as I have done the last few years. Every time I tried to think I’d immediately become overwhelmed and shut down. I felt like crying most of the time from the sheer force of the internal pressure (this is embarrassing to admit as I’m someone with a competitive career). This stress just completely shut down my ability to learn and problem solve.

So, I decided to start some tyrosine. I was hesitant because I have heard it can cause panic attacks and I definitely don’t need more of those! I bought some powder and took 400mg on an empty stomach about 30 minutes before breakfast. WOW!!! Within an hour the stress just melted away!

I wasn’t stressed on my way to work either which normally I am. I was able to sit down and think thru my problems without feeling overwhelmed at all. Also, I was communicating with people much more easily. I noticed better eye-contact. I seemed less concerned of anyone’s opinions too.

I take another 400mg 30 minutes before lunch. I simply cannot believe how much better I am doing!

Just a few weeks prior I was telling my wife that I may need to start thinking about starting the process for disability because I simply could not function well enough to do my job.

I’d also add that the stress from the anxiety was so bad I felt like I had the flu for a few weeks. This also has dissipated since starting the tyrosine.

It’s still early in this experiment but I am hopeful for once. Nothing, and I mean NOTHING has worked so well so fast for me than tyrosine. It’s the closest thing to a miracle I’ve ever experienced. A night and day experience!

What wonderful results! I’m thrilled to hear about his “miracle” and that he’s doing so much better, that he has hope and that the stress from the anxiety has dissipated!

What approach to follow if you can relate to this situation

Of course, I thanked him for sharing his success story with tyrosine and added my response for other blog readers who may relate to this situation and may consider a trial of tyrosine as a first step when anxiety is an issue.

I still stand by my advice to start with GABA and tryptophan when you have anxiety whether it’s the low serotonin-type anxiety (worry in the head) or the low GABA-type anxiety (physical anxiety). I always have clients start by addressing these deficiencies first before adding tyrosine for the low catecholamine symptoms because tyrosine is too stimulating for many and can increase anxiety and insomnia (and may also cause a panic attack).

With the majority of the anxious clients that I’ve worked with, the order of doing trials is as follows: tryptophan or GABA first and then tyrosine.

Addressing his low catecholamine symptoms was what he needed

For this gentleman, clearly GABA and tryptophan support was not what he needed or was not enough to ease his anxiety. Addressing his low catecholamine symptoms was what he needed to do.

In case you’re wondering how he’s doing now – I reached out to him and he reports he’s still taking tyrosine and is still doing great!

He is the third person that I know of who has experienced these types of results with tyrosine so I expect there are others who could benefit too – which is why I decided to share his story.

Increased anxiety because of lack of focus and low motivation

Here is another similar story from a prior client of mine. She had terrible anxiety, and we trialed both GABA and tryptophan. While she did get some benefits with both it just wasn’t enough.

She was sleeping better but still felt so stressed and anxious when preparing for an important meeting at work which she was in charge of running. The anxiety also seemed to get worse during the meetings. She did also score high on the low catecholamines section on the amino acid questionnaire (poor focus, low motivation, fatigue, ADHD, depression) but were working on the low serotonin and low GABA types of anxiety before addressing poor focus and low motivation.

It turned out that her anxiety escalated around her work meetings because of her lack of focus and low motivation – she was pushing herself to get through them. Once she added tyrosine her anxiety was under control. In this instance tyrosine actually helped ease the anxiety because her ADHD symptoms diminished and her motivation and drive improved!

Here are some related blog posts that you may find helpful:

Do let us know if you have experienced less anxiety and a sense of calm focus when taking tyrosine?