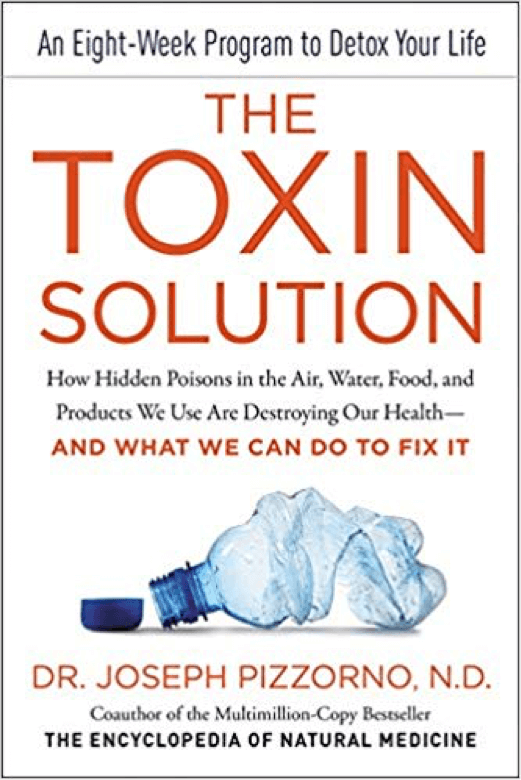 Toxin exposure is at an all-time high and very relevant when it comes to anxiety, ADHD, asthma, diabetes, cancer, dementia and all chronic diseases. I did this wonderful interview with Dr. Joseph Pizzorno in 2017 when his book – The Toxin Solution – was published and for some reason it didn’t make it onto the blog.

I’ve decided to share it now because Dr. Pizzorno is one of the speakers at the August IMMH/Integrative Medicine for Mental Health conference.

If you’re planning to attend this will give you a taste of what to expect. If you’re on the fence hopefully this will convince you, together with the fact that I’m presenting again this year (I’m doing a deep dive into GABA).

I look forward to meeting him in person at the conference and will hopefully see you there too! If you can’t make it or are not a practitioner enjoy this interview and do checkout his fabulous book.

Read on for notes from our interview, the video interview and resources for you related to our interview. Some highlights include these facts: about 90% of diabetes is just due to 6 toxins; PCBs (polychlorinated biphenyls) may account for half of all breast cancer; top 10% of those exposed to organophosphate pesticides saw a doubling of ADHD (just one pesticide); 20% of osteoporosis in women is due to cadmium; lentil soup in a can has 10 x more BPA than homemade and much more

Here is the book: The Toxin Solution: How Hidden Poisons in the Air, Water, Food, and Products We Use Are Destroying Our Health–AND WHAT WE CAN DO TO FIX IT (my Amazon link)

Here is our wonderful interview

And here is a summary from the video interview:

Do let us know what steps you’ve made to reduce toxic exposure in your life and what you’ve done to detox, and what improvements you’ve observed.

Feel free to post questions in the comments too.

And let me know if you’ll be at IMMH. And be sure to stop by and say hi to both me and Dr. Pizzorno.

The FDA has just approved GMO salmon, which has already been dubbed frankenfish.

If you want to find the latest product approved by the FDA, don’t bother with the pharmacy. Try the fish freezer.

The AquAdvantage Atlantic salmon has made history – along with a generous serving of controversy — by becoming the first genetically engineered food animal approved for sale in the U.S.

Because of its genetic modifications, the Food and Drug Administration said the new variety of salmon “meets the definition of a drug.”

It’s sad and also a little crazy – fish is now a drug!

Here is an excellent interview that Jeffrey Smith did on Underground Radio with Sean Croxton 5 years ago when the GMO salmon was pending approval: Say NO to GMO Salmon! with Jeffrey Smith. They talk more about the fact that this fish is now a drug which allows them to keep various aspects secret.

The fish grows twice as fast as normal salmon, so it reaches market size more quickly. It has an added growth hormone from the Pacific Chinook salmon that allows the fish to produce growth hormone all year long. The engineers were able to keep the hormone active by using another gene from an eel-like fish called an ocean pout that acts like an “on” switch for the hormone. Typical Atlantic salmon produce the growth hormone for only part of the year.

Boycotting the AquAdvantage salmon (produced by biotechnology company AquaBounty Technologies) won’t be easy because the salmon may not be labeled as GMO or genetically engineered/GE.  And if you’re eating at a restaurant you may not know the difference.

Many big food stores like Whole Foods, Trader Joes, Aldis and even Costco have said they will not sell this GMO salmon. This is good news!

The Center for Food Safety is ready to fight back and sue the FDA challenging its approval of these untested, unlabeled, and unwanted GMO/genetically engineered salmon and you can support this effort here.

Of course your best choice is wild-caught salmon, which are never genetically modified and have many added benefits over any type of farmed salmon, GMO or not. You may recall the great interview on The Anxiety Summit where Randy Hartnell, fisherman, and owner of Vital Choice talked about the wonderful benefits for seafood. Our topic: What you need to know about seafood—the ultimate brain and mood food

What do you think? Are we being overly concerned about GMO salmon? Or should we be boycotting it? Would you be willing to eat it and feed it to your family? Or are you strictly a wild salmon consumer?

We should be concerned about non-organic produce and pesticides despite the recent research published by Stanford: Smith-Spangler C, Brandeau ML et al. 2012. Are Organic Foods Safer or Healthier Than Conventional Alternatives?: A Systematic Review. Annals of Internal Medicine. 2012;157(5):348-366

There are two parts to this study:

The focus of this article is to address this statement in the conclusion: “Consumption of organic foods may reduce exposure to pesticide residues…” and why it’s important.

Let’s look at the some of the research around pesticide exposure and how this can affect the brain, cognition, ADHD, anxiety and depression in particular.

Organophosphates (a commonly used toxic pesticide) “act directly on the nervous system by inhibiting the neurotransmitter acetylcholine.” They have “acute psychological and behavioral effects, such as anxiety, depression, and cognitive impairments.” The researchers suggest that long-term psychological effects of low-level exposure have not been determined satisfactorily.

In this study sheep framers exposed to low levels of organophosphate pesticides experienced increased anxiety and depression, as well as worse cognitive function and memory.

More recently, this study found that even low levels of pesticides in conventionally grown vegetables and fruit increased the risk of developing attention deficit/hyperactivity disorder in 8 to 15 years of age.

When it comes to elderly grain farmers in Alberta those “with mental ill-health in hospital discharge records were more likely to have been exposed to phenoxy compounds for ≥35 years.”

Coleman MD, O’Neil JD et al. 2012. A preliminary investigation into the impact of a pesticide combination on human neuronal and glial cell lines in vitro. PLoS One. 7(8):e42768.

This study found that certain fungicides (pyrimethanil, cyprodinil and fludioxonil), alone and also in combination “showed significant reductions in cellular ATP.” “The effects on energy metabolism were reflected in their marked toxic effects on mitochondrial membrane potential.” There was also “evidence of oxidative stress.” The authors conclude: “This report suggests that the impact of some pesticides, both individually and in combinations, merits further study in terms of their impact on human cellular health.”

In this study “chronic perinatal exposure to low doses” of insecticides led to an increase in anxiety in the offspring of female mice. The authors suggest that “the routes of administration and the duration of exposure during brain development may be factors to consider when studying the development of anxiety.”

This animal study found that pesticide exposure resulted in an “increase in the levels of lipid peroxidation and reactive oxygen species in both cerebellum and cerebrum.” Also, glutathione (a potent detoxifier) was decreased and anxiety levels were increased. The interesting thing is that researchers concluded that zinc (one of my favorite nutrients for anxiety and depression) “has potential to act as a neuroprotectant against pesticide-induced neurodegenerative and behavioral disorders but further investigations need to be conducted to understand the exact mechanism of neuroprotection.”

I’m encouraged by this research and look forward to further studies that will examine the impacts of pesticides on the nervous system. So yes, we obviously do need to be concerned about pesticides in the produce we consume. This August 2012 Neurotoxicology paper states it well: “The association between pesticide exposure and neurobehavioral and neurodevelopmental effects is an area of increasing concern .”

This is the headline of one of the original Stanford blogs: Little evidence of health benefits from organic foods, Stanford study finds.

Much of the media used this and ran with it. Here is the article on ScienceDaily.com  NPR’s food blog, The Salt took the same approach as did Huffington Post and others.

Thank you France Moore Lappe for your wisdom: Stanford Scientists Shockingly Reckless on Health Risk And Organics.   And Mike Adams, the Health Ranger writes: Flawed organic foods study really just a media psyop to confuse the public about organics while pushing GMOs.   Jeff Cox, shares some of the nutrient research that seems to be missing from the Stanford study in his blog:  Monsanto’s Tricky Plan to Defeat GMO Labeling? 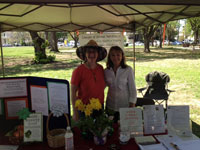 Take care of the earth and take care of yourself, your health and your mood! Earth Day is a day early each year on which events are held worldwide to increase awareness and appreciation of the Earth’s natural environment

There was great event in Sacramento and I shared a booth with Donna Kelley. I had samples (and recipe) of roasted pumpkin seeds and herbal teabags. Of course, I also had copies of my book The Antianxiety Food Solution: How the Foods You Eat Can Help You Calm Your Anxious Mind, Improve Your Mood and End Cravings. So much of what we do for anxiety and overall mood is just naturally also good for the earth – like eating quality food, avoiding pesticides, exercising and more! It was fun sharing a booth with Donna, a fellow nutritionist at Concepts of Optimal Nutrition. Donna had a drawing for potted herbs, a yummy recipe and information about her nutrition programs.

Here are some of the tips we shared:

We even made it onto KCRA/Channel 3 news at 5pm! Don’t blink or you may miss it – ha ha! It is right at the start as the announcer starts talking, at the 6-10 second mark, so a total of 5 seconds! It shows The Antianxiety Food Solution “You Are What You Eat Poster”. I’m “Zen Apple Girl” and Bruce is “Stressed Sugar Girl”! Here is the Earth Day video.

I think these little girls did a better job with being “Zen Apple Girl” and “Stressed Sugar Girl”. And the great thing is that the kids really got the food-mood connection with feeling awesome with eating good food versus feeling bad, anxious and cranky when they eat sugar and junk! 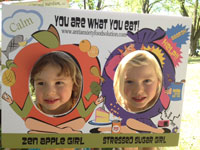 I’d like to end with this beautiful “Earth Day Anthem”

It was super to see so many people out celebrating Earth Day. Great see some friend and clients and meet new people. It was also great to see all the other great vendors sharing about electric cars, organic produce and farmers markets and more. I hope you get to enjoy it every year and every single day of the year too.