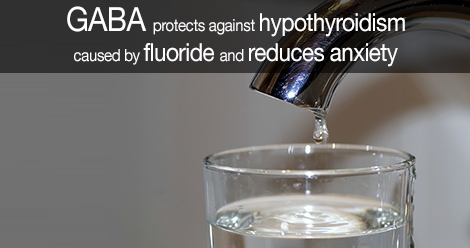 GABA (gamma-aminobutyric acid) is a calming amino acid that when taken as a supplement (ideally sublingually) works to relax, calm, ease anxiety and social anxiety, quiet the mind, help with sleeping challenges, reduce neck and other body tension, remove uneasiness and worry, and give hope.

It’s one of the main amino acids I use with my anxious clients and they see great results. We are seeing more and more research that this amino acid does work and yet I still get weekly questions about GABA: “I’ve been told it won’t work unless I have a leaky blood brain barrier.” This is a myth I’m trying to dispel and cover this topic in great detail in my GABA talk on the last Anxiety Summit.

Because of all this I’m always excited to see new research on the benefits of GABA and this recent study is no exception. It was an animal study and the authors report that GABA also protects against hypothyroidism caused by fluoride: γ-Aminobutyric acid ameliorates fluoride-induced hypothyroidism in male Kunming mice.

The mice that were injected with sodium fluoride were found to have decreased blood levels of T4, T3 and thyroid hormone-binding globulin (TBG) and damage to the thyroid:

The fluoride-exposed mice that were subsequently treated with GABA were found to have improved results for T4, T3 and thyroid hormone-binding globulin (TBG levels) and healing of the structural abnormalities in thyroid follicles that were observed after fluoride exposure.

The authors conclude with this statement, reporting that GABA acted as a natural antioxidant:

To the best of our knowledge, this is the first study to establish the therapeutic efficacy of GABA as a natural antioxidant in inducing thyroprotection against fluoride-induced toxicity.

If you can’t get access to GABA, a paper published earlier this year reports similar results with taurine, an amino acid that promotes GABA production: Taurine Ameliorates Renal Oxidative Damage and Thyroid Dysfunction in Rats Chronically Exposed to Fluoride.

Added to our water supplies, fluoride affects the thyroid

Although this post is about GABA I recognize that I also have to address the fluoride aspect which I know is a controversial topic! We all know that fluoride has been added to our water supplies in an attempt to try and prevent tooth decay. Izabella Wentz, author of the new book Hashimoto’s Protocol, writes about what she calls the Fluoride Conspiracy:

However, most people don’t know that fluoride was used as an antithyroid drug that suppressed thyroid activity in people with overactive thyroids before the invention of antithyroid drugs.

A dose of 2 to 5 mg per day was typically found to be effective for suppressing an overactive thyroid. If you’re following directions and drinking your eight cups of water each day, chances are, you are taking in enough fluoride to suppress your thyroid if you live in the typical fluoridated community!

While most Westernized countries have rightfully rejected fluoridation without any apparent consequences on tooth decay, the United States, Canada, and parts of the UK continue to fluoridate their water.

In research that was way overdue, a 2015 British study reported that medical practices in a fluoridated area of the UK (West Midlands vs. those in a nonfluoridated area, Greater Manchester) were twice as likely to report a high prevalence of hypothyroidism in their patients! Furthermore, analysis of different parts of the UK found that the rates of hypothyroidism were statistically matched to the rates of fluoride in the local water supply!

Medications and other sources of fluoride

Izabella also lists some of the most commonly used medications that contain fluoride in this blog post: Fluoride And Your Thyroid

Other common sources of fluoride are fluoridated toothpastes and dental preparations, processed beverages and foods, pesticides, tea, mechanically deboned meat, Teflon pans and exposure in the workplace. You can read more about these sources from The Fluoride Action Network (FAN), an organization that seeks to broaden awareness about the toxicity of fluoride compounds among citizens, scientists, and policymakers alike.

The GABA and taurine hypothyroid-fluoride research is too new to have made it into Izabella’s book but since anxiety is a common symptom in hypothyroidism and Hashimoto’s thyroiditis, and based on this research, using either GABA or taurine shows promise for helping both the thyroid to heal after fluoride exposure (via water, medications, diet or workplace exposure) AND to help reduce the physical anxiety symptoms.

It seems to be a two-way street because we’ve always known that the amino acids will be effective for addressing low GABA and low serotonin levels ONLY when thyroid health is optimal (and not many people are aware of this).

I also can’t help but wonder if a small amount of GABA (or taurine) wouldn’t be helpful after known exposure to fluoride sources and certainly while you are working to reduce fluoride exposure – even if hypothyroidism is not a problem. I look forward to future research in this area.

If you’d like an overview of how I use GABA and the other amino acids with my clients you can read all about it here.

I’d love to hear if you have observed an improvement in thyroid health since using GABA for your anxiety? And how dedicated you are to avoid fluoride? 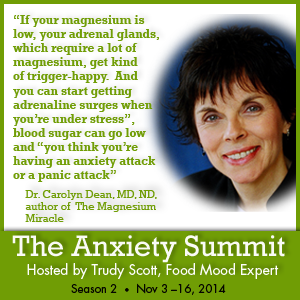 Take magnesium and melt your anxiety away

If your magnesium is low, your adrenal glands, which require a lot of magnesium, get kind of trigger-happy. And you can start getting adrenaline surges when you’re under stress, blood sugar can go low and you think you’re having an anxiety attack or a panic attack.

Now, your cholesterol depends on a magnesium enzyme to balance cholesterol. If you have too much, it brings it down; if you have too little, it brings it up. It’s done through the mechanism of magnesium. But the statin drugs kill that particular enzyme! And, as well, they cause more magnesium deficiency because many of the statin drugs actually have a fluoride molecule attached, and that fluoride molecule will bind up more magnesium.

Here is one of the 2014 studies we mentioned: Effect of oral magnesium supplementation on physical performance in healthy elderly women involved in a weekly exercise program: a randomized controlled trial

Here’s the blog post: When magnesium makes me worse  It also has information about magnesium RBC testing with RequestaTest.com and fluoride in medications.

Overall, the present findings demonstrate the robustness and validity of the Mg(2+) deficiency model as a mouse model of enhanced anxiety, showing sensitivity to treatment with anxiolytics and antidepressants. It is further suggested that dysregulations in the HPA axis may contribute to the hyper-emotionality in response to dietary induced hypomagnesaemia.