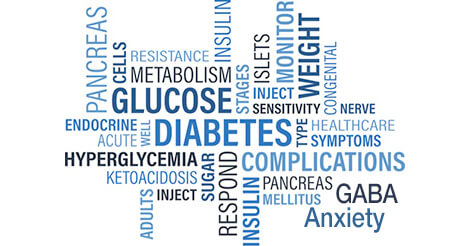 Anxiety and depression are common in patients with diabetes. In this 2016 paper: Prevalence and predictors of depression and anxiety in patients of diabetes mellitus in a tertiary care center, it was found that a significantly larger proportion of diabetic patients had

GABA is one of the calming amino acids I used with much success with my clients who have the physical type of anxiety (with stiff and tense muscles). As well as addressing this type of anxiety it also helps them to end their sugar addiction, reducing cravings dramatically. Melissa shares her results after using GABA on this blog: GABA for ending sugar cravings (and anxiety and insomnia)

I was cool as a cucumber at the airport and was much calmer when visiting family and friends compared to last year! The true test of its efficacy will be in two weeks when the semester starts. For now, I notice a general calmness and am sleeping well.

An unexpected result was that I stopped craving sweets after about a week of taking it! I didn’t even realize this until I was grocery shopping and out of habit walked towards the ice cream – I stopped and realized I didn’t want ice cream. So I walked toward the chocolate – same reaction. For once in my life, I was not craving sweets.

Now there is some interesting recent research showing how GABA may play a role in diabetes treatment too.

This February 2015 paper, GABAergic system in the endocrine pancreas: a new target for diabetes treatment explains the role of GABA in regulating islet-cell secretion and that it exerts β-cell regenerative effects:

Excessive loss of functional pancreatic β-cell mass, mainly due to apoptosis, is a major factor in the development of hyperglycemia in both type 1 and type 2 diabetes (T1D and T2D).

In T1D, β-cells are destroyed by immunological mechanisms. In T2D, while metabolic factors are known to contribute to β-cell failure and subsequent apoptosis, mounting evidence suggests that islet inflammation also plays an important role in the loss of β-cell mass. Therefore, it is of great importance for clinical intervention to develop new therapies.

γ-Aminobutyric acid (GABA), a major neurotransmitter, is also produced by islet β-cells, where it functions as an important intraislet transmitter in regulating islet-cell secretion and function. Importantly, recent studies performed in rodents, including in vivo studies of xenotransplanted human islets, reveal that GABA exerts β-cell regenerative effects. Moreover, it protects β-cells against apoptosis induced by cytokines, drugs, and other stresses, and has anti-inflammatory and immunoregulatory activities. It ameliorates the manifestations of diabetes in preclinical models, suggesting potential applications for the treatment of diabetic patients.

This paper published in November 2015: Study of GABA in Healthy Volunteers: Pharmacokinetics and Pharmacodynamics also reports potential therapeutic benefits for those with diabetes:

You can read more about this in the blog post: GABA rapidly absorbed and tolerated – benefits for anxiety and diabetes

This newly discovered GABA-induced α cell-mediated β-like cell neogenesis [or the regeneration of tissue] could therefore represent an unprecedented hope toward improved therapies for diabetes.

So here we have the amino amazing acid GABA that when used as a targeted supplement:

I’m proposing oral GABA as a much better option for diabetic patients with anxiety – better than benzodiazepines which have been shown to contribute to cognitive impairment. Using GABA sublingually seems to be most effective.

Do you have diabetes and has GABA helped you with your cravings and anxiety? And enabled you to reduce your diabetes medication?

If you’re a practitioner I’m curious if you commonly see anxiety and depression in your diabetes patients/clients? And do you currently use GABA (and other amino acids like tryptophan and glutamine) to help reduce their anxiety and sugar cravings? And reduce their diabetes medication?