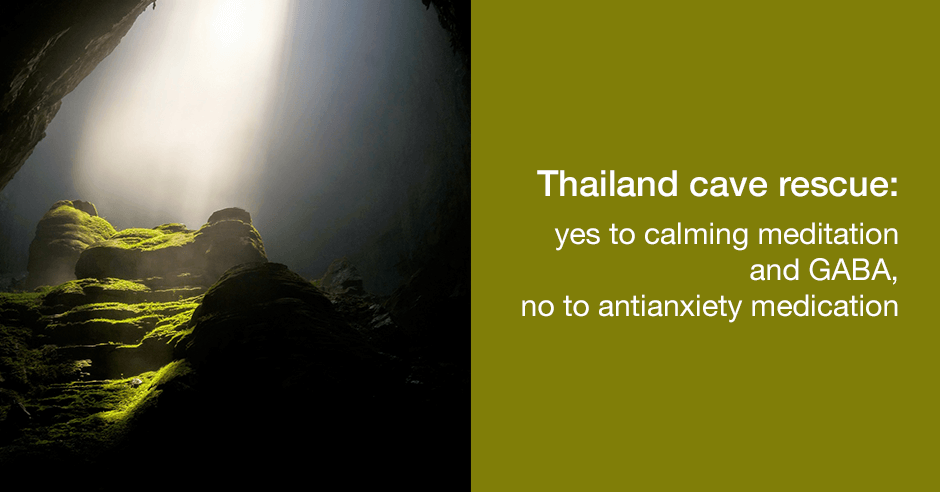 The cave rescue of 12 teens and their soccer coach in Thailand is such a beautiful story of hope, courage, resilience, volunteerism and the whole world coming together! I’ve been following the news about this from day 1 (as I’m sure you were) and felt such relief and joy on hearing they had all been safely rescued and appear to be physically and mentally fine.

I’m weighing in on the fact that meditation seems to have played a major role in keeping them calm, using GABA or theanine instead of antianxiety medications and B vitamins for ongoing psychological support.

Meditation seems to have played a role in keeping them calm

Meditation seems to have played a role in keeping them calm, according to this report from the UK

The 12 Thai boys and their football coach who were trapped in a cave in Thailand got through the ordeal by practicing meditation, family members have said.

According to a mother of one of the boys, the team were meditating in the widely shared video of their discovery by two British divers.

Look at how calm they were sitting there waiting. No one was crying or anything. It was astonishing.

The coach who was rescued from the cave on Tuesday, trained as a Buddhist monk for 12 years before he decided to coach the Wild Boars soccer team.

‘He could meditate up to an hour,’ said his aunt, Tham Chanthawong. ‘It has definitely helped him and probably helps the boys to stay calm.’

Here is the video of their lovely smiling calm faces when they were first found.

In this paper, Meditation Programs for Psychological Stress and Well-Being, they report that

Meditation has also been shown to improve dopamine and serotonin transporter binding, which appears to have reduced fatigue and improved mood in this study, likely because there are higher levels of these neurotransmitters available.

Meditation and GABA/theanine instead of antianxiety medications

It was clearly an extremely difficult rescue and the Australian doctor, Adelaide anaesthetist Dr Richard Harris, risked his life to go into the cave and stayed with the boys and their coach for several days. He assessed their health and made sure they were ready for the rescue.

He used his medical expertise and rescue diving experience to decide to have each of them use antianxiety medication for the arduous 8-hour plus rescue (I suspect it was Dr. Harris’ decision). It was confirmed by Thai Prime Minister Prayuth Chan-ocha – to help calm their nerves – and it’s likely they were given a benzodiazepine, hopefully only the one time.

Even though very short term acute situations like this, is actually the intended use of benzodiazepines, it concerns me that these young boys were medicated, especially since adverse paradoxical reactions can be caused by benzodiazepines and are difficult to predict and diagnose.

The following adverse reactions can occur: “unanticipated restlessness and agitated episode,” sometimes aggression, hostility, and rage, as well as “an increased state of anxiety.” An adverse reaction during the actual rescue would have been very serious.

There were also reports of elevated white blood cells (WBC) and signs of a lung infection in some of the boys, and one boy had low blood pressure. These are all be side-effects of benzodiazepines. It’s difficult to know what caused any of this – was the medication, the rescue itself and the fact that were under water or spending all that time in the cave?

My intention is not to be critical of the medical decisions that were made in these very dire circumstances. I’ve done caving or spelunking as it was called in England and it’s pretty scary being underground and in the dark, wading through running water – and we were safely in control of things!

I’m sharing about benzodiazepines simply to raise awareness about other options and some of the many risks. And we haven’t even explored the fact that long-term use of benzodiazepines do more harm than good. More than a week to 2 weeks is considered too long, and for some this is even too long.

I really do look forward to the day when benzodiazepines are not the first approach but rather that:

B vitamins and other nutrition solutions after psychological stress

People who endure such an intense and dangerous event can go on to suffer lasting anxiety, depression and other symptoms of post-traumatic stress disorder.

I was so pleased to hear that the boys and their coach are being given B vitamins. There is evidence-based research on the psychological benefits of B vitamins after a trauma (like an earthquake or flood), thanks to my colleagues Julia Rucklidge, PhD and Bonnie Kaplan PhD​.

I do hope the B vitamins are continued and is offered to worried family members and all the wonderful rescuers who must be exhausted and stressed too.

Hopefully the boys will also continue to meditate with their soccer coach and share some of the benefits they experienced with family and friends.

How did you feel when you heard the rescue was over? Good news gives us such feel-good warm emotions doesn’t it!?

Do you meditate and have you used calming GABA or theanine?

Let us know if you have questions too.