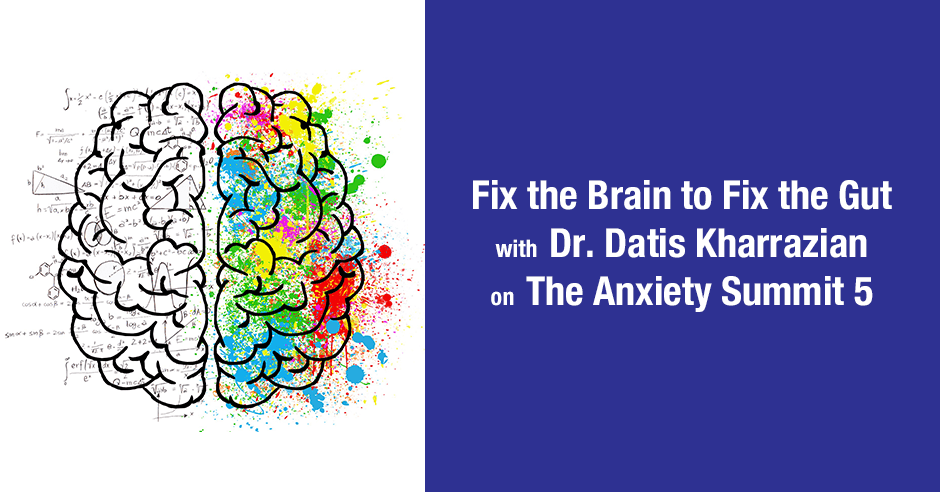 Datis Kharrazian, DHSc, DC, MS, FACN, CNS is one my guest experts on The Anxiety Summit 5: Gut-Brain Axis and our topic is: Fix the Brain to Fix the Gut. In this interview you’ll learn: 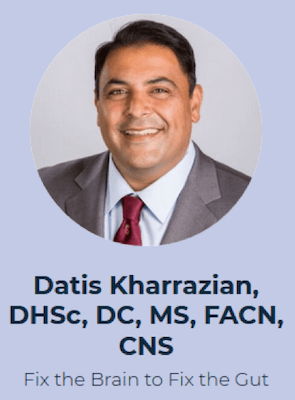 We’re taught that “healing begins in the gut” and it’s a huge factor but in certain instances we need to do more before the gut can truly be healed. When you have had a traumatic brain injury/TBI, integrative functional neurology teaches that the brain has to be fixed for the gut to gut to work well. Dr. Kharrazian why this is important:

Someone can have a TBI and 10 or 15 years later they can experience brain and neurological symptoms – like depression and anxiety. These patients can end up with chronic GI issues as a consequence of the TBI because there is this intimate relationship between the brain and how it controls gut function.

In this interview you’ll hear how, after a TBI, the bidirectional gut-brain-microbiotia axis leads to structural and functional  damage to the gut, increased intestinal permeability and an altered microbiome, an immune response and inflammation. There is also often impaired motility, breakdown of the blood brain barrier and impaired vagal activity (and much more).

Dr Kharrazian discusses aspects of this paper: The bidirectional gut-brain-microbiota axis as a potential nexus between traumatic brain injury, inflammation, and disease

Dr. Datis Kharrazian is a clinical research scientist, academic professor, and a functional medicine health care provider. You likely are familiar with his work as the author of Why Do I Still Have Thyroid Symptoms? and Why Isn’t My Brain Working?

What I found most surprising is that you don’t even have to have been concussed for a head injury to have an impact on your gut! The serious consequences of a head injury (and subsequent damage to the gut) is very much related to your blood sugar, nutritional status and stress levels at the time of the fall or head bang.

After learning all this it really got me thinking about the many falls I have had. I have never been concussed but I’ve been in a roll-over car accident, fallen hard snow-boarding, fallen sideways off my mountain bike onto rocks at Moab, and taken a really big pendulum fall when rock-climbing in Cape Town. Based on all this and my many chronic gut issues, I am going to have a full functional neurology assessment done and will report back as I learn more.  I’ve completed Dr. Kharrazian’s questionnaire and it seems like I would really benefit from some neuro-rehab. I hope our interview gives you some insights too.

We also talk about one of my favorite topics: GABA and the controversial blood-brain-barrier question. I think you’ll really enjoy this discussion. Do let me know what you think!

We go on to talk about resveratrol, curcumin and butyrate, as well as some very practical neuro-rehab exercises he uses with his patients.

Please join us and listen to the entire interview on The Anxiety Summit 5: Gut-Brain Axis.  When you register you’ll get access to 3 interviews right away, including Dr. Kharrazian’s interview:

If you have already signed up for the summit, I hope you enjoy these interview highlights.

If you have yet to sign up, please do come and join us and learn.

Register for the Anxiety Summit 5

If you’re considering purchasing the summit to keep for your learning library, you have a number of options that include:

If you’d like to give feedback or ask a question, please post in the comments section at the bottom.

I’d love to hear from you once you’ve listened in to Dr. Kharrazian’s interview and the others. 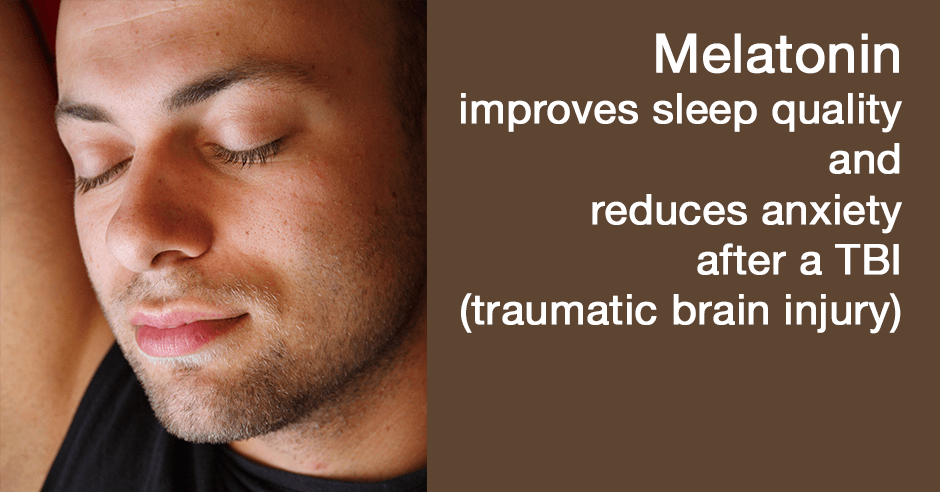 The study participants, 67% of whom were male, had mild to severe TBI and sleep disturbances as a result of their injuries (most of which were from car accidents). There were 2 study groups, with one group given 2mg of prolonged-release melatonin for 4 weeks and then switched to a placebo for 4 weeks (with a 48-hour window in between). The other group did the opposite.

The prolonged-release melatonin was made by Sigma Pharmaceuticals Australia and called Circadin. Each night 2 hours before bedtime, 2mg of Circadin was taken by study participants. They received a reminder text message each night.

These are the study results for sleep:

There was no significant reduction in sleep onset latency with melatonin compared to placebo.

What this means is that overall quality of sleep improved but there was no change in the time it takes to fall asleep (sleep onset latency). The latter is to be expected with prolonged-release or timed-release melatonin.

The study concluded that:

The present results, therefore, suggest that melatonin may be useful in treating sleep disturbances in patients with TBI.

With better sleep quality you would expect reduced fatigue and improved vitality – both were reported by study participants.

Melatonin associated with a small decrease in self-reported anxiety

What is interesting is that melatonin was also associated with a small decrease in self-reported anxiety (no differences in depression were reported.) The authors suggest that one possible mechanism of this may be that melatonin acts a muscle relaxant. In this commentary: Potential action of melatonin in insomnia, the authors equate the beneficial effects of melatonin to benzodiazepines:

They are suggesting that with melatonin we get the sleep improvement (sleep propensity is the readiness to transit from wakefulness to sleep, or the ability to stay asleep if already sleeping), relaxation effects and antianxiety benefits of benzodiazepines.

But you get none of the side-effects, tolerance issues and withdrawal nightmares with a benzodiazepine which do more harm than good. On a side notes: this month World Benzodiazepine Day is celebrated to create awareness and offer support for benzo sufferers.

I would have picked something more inert for the placebo ingredients

I would have picked something more inert for the placebo ingredients: mannitol (106mg), acacia (11 mg) and pure icing sugar (106 mg). Mannitol, a sugar alcohol, can cause bloating and diarrhea in some individuals and although the amount is tiny (5g of sugar equals 1 teaspoon), sugar consumption is not ideal before bed. As I would expect adverse symptoms:

were more frequently reported during placebo treatment. The most commonly reported symptoms were neurological, followed by bodily pain, gastrointestinal and dermatologic.

In Australia, melatonin cannot be purchased over the counter (OTC) at health stores or via online retailers, unlike in the USA, and is only available by prescription. I’m all for melatonin being available OTC but the silver lining to this is that companies that make melatonin, such as Circadin, have a vested interest in the research. Research is expensive and time-consuming and we get to benefit too.

Keep in mind that this research is applicable to anyone with low melatonin, whether or not a prior TBI has occurred.

In those with TBI, sleep disturbances are common, and the authors do report reduced evening and overnight melatonin production in this population. However, there are many root causes of insomnia, with low melatonin being one possible root cause – in TBI and in those who have not had a TBI.

One study limitation is that they didn’t measure melatonin levels or circadian rhythm (salivary cortisol) in all of the study participants so we can’t be sure everyone did have low melatonin.

And melatonin isn’t going to work in all instances of insomnia. It’s one root cause I look at.

This is how I work with clients who have insomnia:

We’d love to hear if timed-release melatonin has helped you improve your sleep quality? And if it also helped with easing anxiety?

What about tryptophan or sublingual melatonin for helping you fall asleep? And the other root causes?

If you’re a practitioner, do you use tryptophan or sublingual or timed-release melatonin with your clients? And address the other root causes of insomnia?