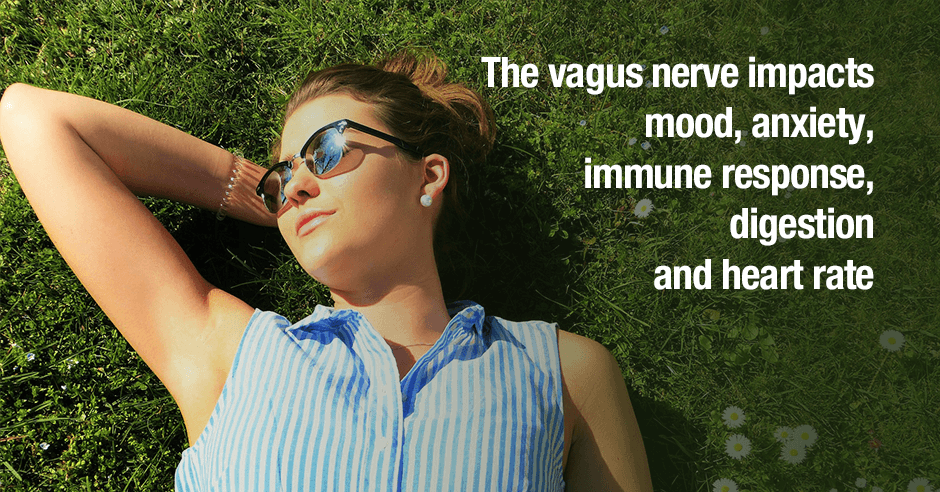 This modern world can lead to overstimulation of the nervous system and you can become desensitized to chronic stress. Over time, this can lead to low vagal tone, which has been linked to a variety of mental and physical health issues, including chronic inflammation, poor gut function, neurodegeneration, autoimmunity and cancer.

And we know this to be true: you cannot FULLY heal leaky gut, microbiome function or brain issues WITHOUT optimizing your vagus function.

Host of the Mind, Body & The Vagus Nerve Connection Summit, Eva Detko, PhD, MSc, BA (Hons), mIAHT, shares the above wisdom about the vagus nerve. I’ll add this: overstimulation of the nervous system is especially high right now during the coronavirus pandemic.

In my interview, Balancing Neurotransmitters to Optimize Vagus Function, we start with a review paper that reports how the vagus nerve is intricately connected with anxiety and mood (and immunity).

I share from Vagus Nerve as Modulator of the Brain–Gut Axis in Psychiatric and Inflammatory Disorders:

The review article goes on to state how the vagus nerve is an attractive tool for treating psychiatric and gastrointestinal disorders: “There is preliminary evidence that vagus nerve stimulation is a promising add-on treatment for treatment-refractory depression, posttraumatic stress disorder, and inflammatory bowel disease.”

And as we all know when we hear the term treatment-refractory depression, it means we haven’t got to the root cause of it. It just means that medications haven’t worked for it.

So this allows us to extrapolate and say, well, there’s other lifestyle and dietary, and nutritional approaches that we could use. But they’re saying that stimulating the vagus nerve, activating it, can actually help in this area. And with my work in anxiety, whenever I see depression, I feel like I can replace that with anxiety (because of similar underlying causes). The other thing that they say is that there’s this impact on inflammation: “Treatments that target the vagus nerve increase the vagal tone and inhibit cytokine production.”

And we know that when we’ve got inflammation going on in the body, that’s going to contribute to mood disorders: “Stimulation of vagal efferent fibers in the gut influences neurotransmitters (like serotonin and dopamine, and GABA) that play a crucial role in major psychiatric disorders.”

So the conclusion is that vagal tone is correlated with the capacity to regulate stress responses and can be influenced by breathing. Its increase through meditation and yoga is likely to contribute to resilience, and the mitigation of mood and anxiety symptoms. And we know from other research, and we know from just doing it, that using meditation and yoga is going to affect anxiety levels. We’ve seen research showing that yoga and meditation raises GABA levels, which is one of the neurotransmitters that helps us feel calm.  But now we’re also seeing from the research that good vagal tone has an impact as well.

So it’s really exciting to see that there’s many different ways that we can use to approach someone who does have anxiety issues.

I also talk about a very interesting study that brings the connections between GABA and the vagus nerve together very nicely. As I’m talking I see Eva nodding in agreement as I cover this. I wanted to share this study to add another mechanism as to how GABA may work, given so many people don’t believe it can because of the blood brain barrier.

This was an animal study done in 2011 and it’s titled: Ingestion of Lactobacillus Strain Regulates Emotional Behavior and Central GABA Receptor Expression in a Mouse via the Vagus Nerve. You may have had other people in the summit talking about this. I can see you nodding there. Let me just bring it back to this discussion because I’ve got something to add about this. But what they found is this – Lactobacillus rhamnosus increased GABA in the hippocampus. It reduced cortisol levels, which was caused by the increased stress, and it reduced anxiety and the depression in the animals.

But maybe this vagus nerve connection and the fact that when it’s severed we’re not getting those effects, maybe this is another way that GABA is having an impact on anxiety.

SSRIs like Zoloft or Paxil or Prozac are often prescribed for anxiety, depression, autism and dementia. And there’s a whole host of issues that we have with SSRIs where you’ll have serious withdrawal symptoms in some people.

In the study, the researchers proposed that SSRIs were having an effect on serotonin and it was the vagus nerve that was now communicating to the brain leading to increased serotonin levels. Similar to the GABA study, when they severed the vagus nerve of the mice, they did not see the same benefits from the SSRI.

My thinking is this: could we possibly extrapolate and say the amino acid tryptophan may have similar effects?

We won’t hold our breath for a similar tryptophan study but we can learn from this paper and possible mechanisms.

I also share how I use GABA and tryptophan with clients so if you’re new to using targeted individual amino acids you’ll learn more about this too.

As you know, my work is primarily using the neurotransmitters precursors (such as the amino acids) and using dietary changes, but we don’t want to forget about other approaches like vagus nerve support.

If we can improve vagus function, then we’re going to get even better benefits.

I share some of my favorite vagus nerve exercises. One of them – social interaction – has been challenging lately but cold showers are very do-able.

Let me share some aspects on the importance of social interaction for improving vagal tone.

Research shows that the more social interactions you have, the more it improves vagal tone. And then that improved vagal tone, improves your mood and makes you more social (and has ramifications for so many other areas as you’ll learn on the summit).

However if you have a condition called pyroluria (social anxiety, preferring one-to-one connections rather than being in large groups, not liking small talk, early morning nausea, not really big on animal protein – I go into it in depth during the interview if it’s new to you), getting out and being social can be very challenging when you are forcing yourself and putting on a brave face:

If you do go out, it’s either very stressful or you just don’t even do it. So my contribution to the discussion is: let’s address pyroluria and that’s going to in turn allow people to get out and socialize without feeling uncomfortable, without feeling awkward, without having to stress, without feeling absolutely exhausted afterwards, and it’s going to help improve vagal tone.

Eva sums up with this important aspect:

What people need to know is that social connection is good for your vagus nerve only if it’s perceived positively by you internally. So if you’re in a situation where you’re forcing yourself to interact with other people, you’re actually not going to have a positive knock-on effect on your vagus nerve because it’s going to be the opposite. You’re going to stimulate the sympathetic nervous system response because you’re there, as you described, completely uncomfortable and basically stress out. So those social connections need to be positive.

Here are some interviews I look forward to tuning into:

I don’t go into the immune connection in my interview because it was recorded before the coronavirus pandemic started but keep this in mind as you tune in: you cannot have a well-functioning immune system without a healthy nervous system, and vice-versa!