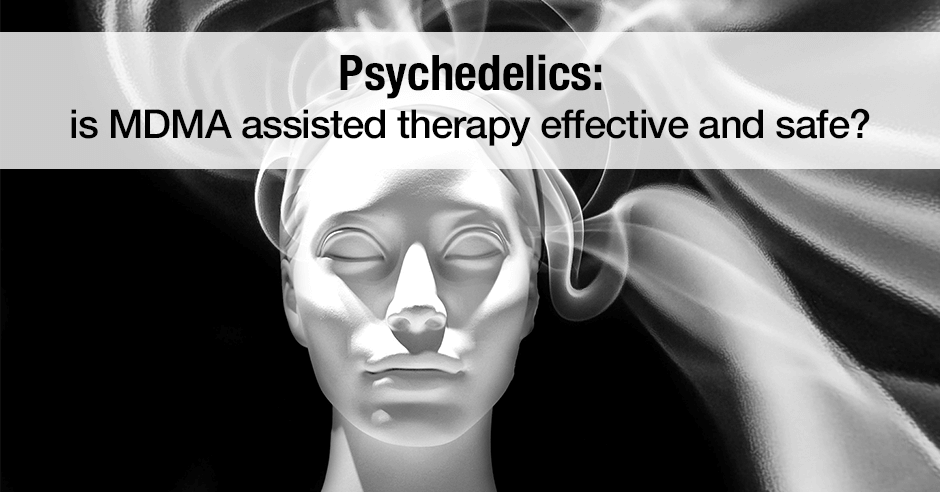 Dr. Dan Engle, MD, did one of the keynote presentations at the recent IMMH conference. The topic was “Psychiatry Meets Psychedelics: Treating Psycho-Emotional Conditions with Ayahuasca, Psilocybin and more.” 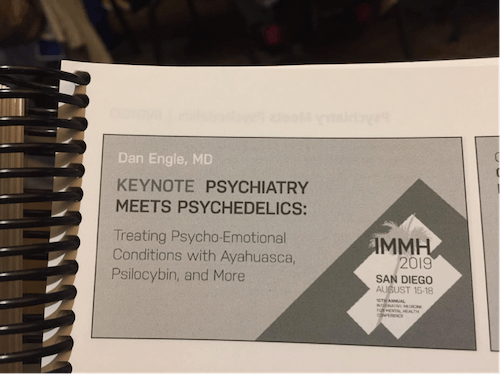 This was not about recreational use of psychedelics but rather Psychedelic Assisted Psychotherapy or PAP, which is “professionally supervised use of ketamine, MDMA, psilocybin, LSD and ibogaine as part of elaborated psychotherapy programs.” Dr. Engle also talked about peyote, cannabis, ayahuasca, San Pedro and DMT. 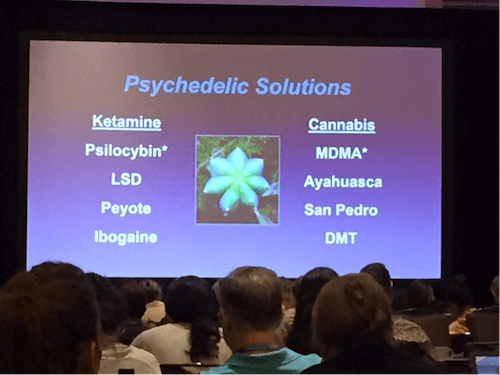 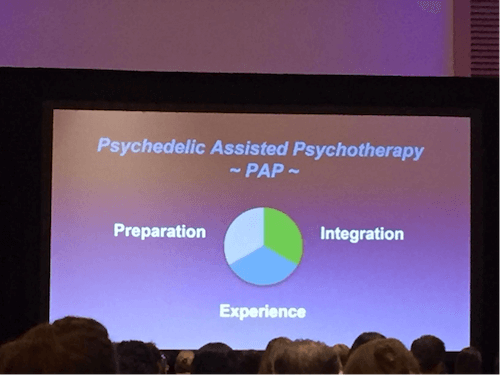 I had the pleasure of meeting Dr. Engle the day before during the speaker panel we were both part of and shared that I was coming to his presentation because I have a curious mind and love to learn but to be honest “I’m not yet sure if I’m on board with pyschedelics because I’m concerned about the adverse effects AND that too many folks will rush into this approach before exhausting all other nutritional and functional medicine options.” He appreciated my honesty, saying the fact that I was going to come to his talk was a great first step. 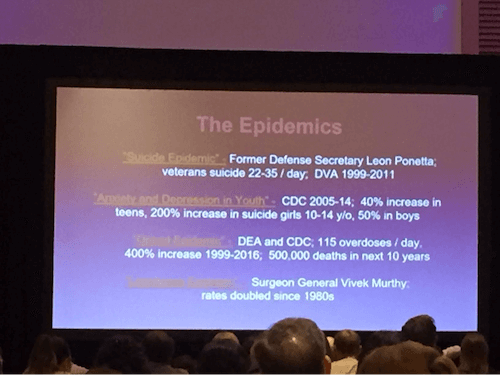 This is all very horrifying and calls for drastic interventions. Is Psychedelic Assisted Psychotherapy the solution and is it safe and effective?

Let’s take MDMA as one example. In case you’re new to the term, MDMA is the abbreviation for 3,4-Methyl​enedioxy​methamphetamine. This 2018 article, Is psychiatry ready for medical MDMA? shares this:

Advocates for MDMA-assisted psychotherapy have been at pains to distinguish the street drug ecstasy from MDMA, the medicine. Ecstasy can contain a range of substances as well as varying doses of MDMA. 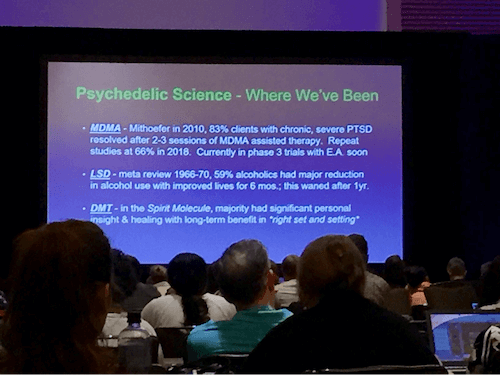 Dr. Engle shared some of the psychedelic science, with impressive results for MDMA.

The study by Mithoefer in 2010 reported that 83% of patients with severe treatment-resistant PTSD saw their symptoms resolve after 2-3 sessions of MDMA assisted therapy. These are very encouraging results, however the patients were described as having treatment-resistant PTSD as a result of not seeing resolution of their symptoms with either psychotherapy or psychopharmacology (i.e. medications). They had not been offered a functional medicine/nutritional approach. This is all good and well if there were no adverse reactions with the MDMA assisted therapy.

According to the above paper: There were no drug-related serious adverse events, adverse neurocognitive effects or clinically significant blood pressure increases.

However, what wasn’t mentioned in Dr. Engle’s presentation is that some studies do show adverse effects of MDMA. For me, this is an area of concern as far as psychedelic use goes, and I would have liked to hear more about what kinds of problems we need to be aware of.

The author ends by saying: My own position is that it will always be far safer to undertake psychotherapy without using co-drugs. In selected cases MDMA might provide an initial boost, but it also has far too many potentially damaging effects for safe general usage.

There are many practitioners who, like me, are not yet on board with Psychedelic Assisted Psychotherapy, because adverse effects appear to be under-reported and not discussed. A more recent 2018 paper calls for more research about the safety of MDMA assisted therapy: an immediate need for more research directly examining its safe usage in the therapeutic context. 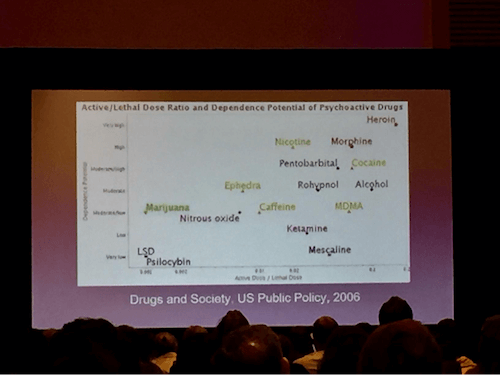 Dr. Engle did also share this interesting slide: Active/Lethal Dose Ratio and Dependence Potential of Psychoactive Drugs, Drugs and Society, US Public Policy, 2006. It’s apparently from this paper published by Gable, RS (I’ll confirm once I find out). You can see MDMA on the far right indicating a rather high potential for acute lethality (bottom scale), with a moderate/low risk for dependence (the scale on the left).

Dr. Engle stopped by my booth after his presentation to see if he’d been able to change my mind. I shared my concerns about the potential risks. I also said that it would be helpful to see a study comparing MDMA assisted therapy with a functional medicine/nutritional approach. I also said I’ll keep reading and learning and will keep an open mind but right now I’m still very much on the fence. This approach does seem to be very effective but I have concerns about safety.

I blogged about some of my concerns last year: MDMA-Assisted Psychotherapy for Treating Chronic PTSD: Why I feel we can do better and the role of nutrition and amino acids like GABA

I agree there is an immense need for successful treatment approaches, but jumping to MDMA from psychotherapy and/or psychiatric medications is skipping out the entire nutritional and biochemical step which is SO powerful and doesn’t have the above adverse effects. I’m concerned too many who have not seen benefits from therapy or medications are seeing MDMA as THE solution and are going to be harmed even further.

One other big reason is that I’m very much on the fence is that I see so much success with the nutritional approach that I use with clients.

In addition to psychotherapy, there are also so many nutritional and biochemical factors we can consider when it comes to PTSD. These don’t have any of the above harmful effects seen with MDMA.

Here are a few to consider:

I feel it is these kinds of interventions that should be considered for PTSD, rather than subjecting individuals who are already suffering to treatments that have adverse reactions AND are not addressing underlying nutritional deficiencies of low GABA, low serotonin, out of balance endocannabinoid system, dysbiosis and overall health, to name a few of the many possible underlying biochemical factors.

Real whole food, exercise, GABA, tryptophan, zinc, berries, probiotics etc. wouldn’t even feature on a chart such as the one above! They are effective approaches and they are safe!

In case you missed the previous IMMH blogs:

Have you been part of a Psychedelic Assisted Psychotherapy program with MDMA or one of the other psychedelics? What benefits did you experience? Did you have any adverse effects?

Would you consider Psychedelic Assisted Psychotherapy with MDMA or one of the other psychedelics?

Have you see benefits and/or adverse effects with your patients or clients?

As a practitioner, do you want to learn more about how to incorporate GABA and the other targeted individual amino acids, tryptophan/5-HTP, DPA, glutamine and tyrosine, into your work to help your clients/patients with anxiety and PTSD? I invite you to check out my new online practitioner training here: Balancing Neurotransmitters – The Fundamentals. I’m extending the $100 discount offered at IMMH for a few weeks (use coupon code immh2019). 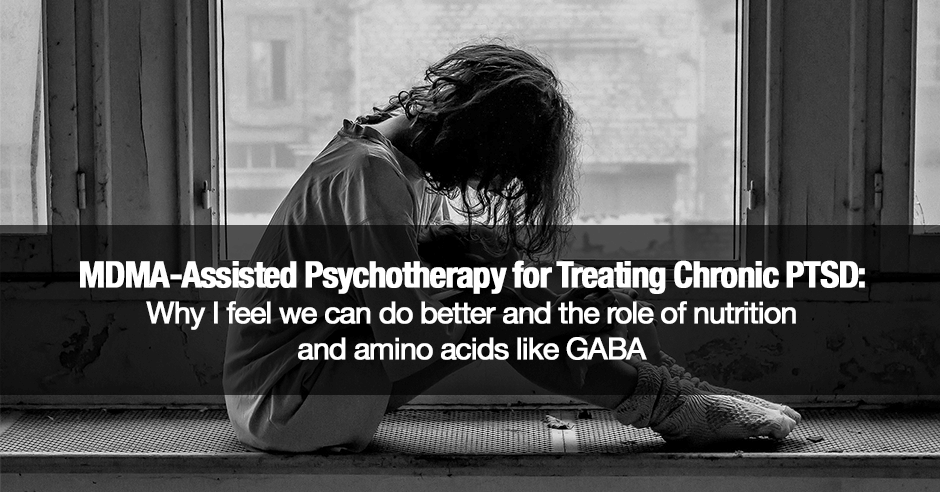 You may be familiar with MDMA (3,4-methylenedioxymethamphetamine), also known as “ecstasy”, because of its reputation as a party drug. And you have likely seen some of the media reports on the new research and growing support for MDMA-Assisted psychotherapy for treating chronic PTSD (post-traumatic stress disorder). Due to adverse effects I’d like to share my concerns about this research and treatment and why I feel we can do better – by addressing nutrition and using amino acids like GABA and others.

28 participants found that one month after their second day-long experimental session, 42.9% in the active-dose (100 mg and 125 mg) MDMA groups did not qualify for a diagnosis of PTSD, compared to 33.3% in the low-dose MDMA (40 mg active placebo) control group.

The results were even more notable 12 months after the third active-dose experimental session, which found that one year following treatment with MDMA-assisted psychotherapy, 76% of participants no longer had PTSD.

It is the largest U.S. FDA-regulated double-blind, placebo-controlled clinical trial of MDMA-assisted psychotherapy for the treatment of chronic PTSD and the results are impressive: 76% of the study participants no longer had PTSD after a year and 3 treatment sessions. I’m really happy for the participants BUT I believe we can do better because there are adverse reactions to this treatment and there are other safer approaches for recovery.

This comment about an acceptable risk profile and adverse reactions concerns me (and I suspect it concerns you too):

A common theme we see in the research on psychedelics is how effective it is for PTSD that doesn’t respond to therapy or medications. This paper states:

There is an immense need for innovative treatment options that improve outcomes, especially for PTSD refractory to psychotherapy and/or pharmacotherapies

I agree there is an immense need for successful treatment approaches, but jumping to MDMA from psychotherapy and/or psychiatric medications is skipping out the entire nutritional and biochemical step which is SO powerful and doesn’t have the above adverse effects. I’m concerned too many who have not seen benefits from therapy or medications are seeing MDMA as THE solution and are going to be harmed even further.

This paper, The Potential Dangers of Using MDMA for Psychotherapy, the author is concerned about the fact that “acute MDMA can stimulate the release of difficult feelings and memories, which may be distressing” and also the negative moods that occur after MDMA treatment:

This period of negative cognitions may be counter-productive, especially in psychiatrically vulnerable clients, for instance those with predispositions to anxiety, depression, or psychosis. For example, it could increase the likelihood of suicide in those individuals with strong post-recovery feelings of depression.

Because of this, I wholeheartedly agree with the author’s position:

it will always be far safer to undertake psychotherapy without using co-drugs. In selected cases MDMA might provide an initial boost, but it also has far too many potentially damaging effects for safe general usage.

In addition to psychotherapy, there are also so many nutritional and biochemical factors we can consider when it comes to PTSD. These don’t have any of the above damaging effects seen with MDMA. Here are a few to consider:

I feel it is these above approaches and others like this that we need to be using to address PTSD, rather than subjecting individuals who are already suffering to treatments that have adverse reactions AND are not addressing underlying nutritional deficiencies of low GABA, low serotonin, out of balance endocannabinoid system and overall health, to name a few of many possible underlying biochemical factors.

If this treatment approach is approved, I would hope that all the adverse effects and dangers are clearly explained and I’d also like there to be informed consent before it is used – so individuals know exactly what they are getting into. Hopefully, by the time it is approved, nutritional psychiatry will be more accepted.

I’d love to hear your thoughts on this research and treatment approach. Is it something you have considered or would possibly consider in the future – you personally or with patients?

Or do you have similar concerns that I have?

Have you already tried MDMA recreationally (possibly for therapeutic reasons) and what were your experiences like?