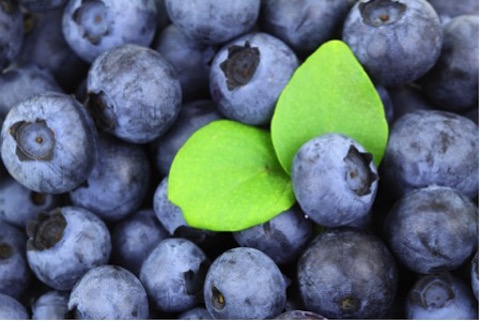 New research finds that blueberries boost serotonin and may help with PTSD and anxiety. This was an animal study and is very promising.

A press release issued by the American Physiological Society shares the following:

Up to 8 percent of people in the U.S. suffer from post-traumatic stress disorder (PTSD) as the result of witnessing or being the victim of a traumatic event.

People with PTSD have been in a situation in which they were at risk of death, serious injury or sexual violence or have seen first-hand loved ones faces such threats. They may experience flashbacks, emotional detachment and jumpiness, among other symptoms that affect their ability to function in everyday life.

Currently, the only approved therapy for PTSD is selective serotonin reuptake inhibitors (SSRIs), such as Zoloft and Paxil, but their effectiveness is marginal. Now researchers at Louisiana State University have found that a readily available superfood—the blueberry—could be an effective treatment.

Philip J. Ebenezer presented the poster titled “The Neuro-Protective Efficacy of Blueberry in an Animal Model of Post-Traumatic Stress Disorder (PTSD)” at the Experimental Biology meeting on March 30, 2016.

Here is the paper/poster abstract: The Neuro-protective Efficacy of Blueberry in an Animal Model of Post-Traumatic Stress Disorder (PTSD)

Post-traumatic stress disorder (PTSD) is a trauma and stressor-related disorder that results in a prolonged stress response. It is associated with increased oxidative stress and inflammation in the prefrontal cortex (PFC) and hippocampus (HC). Previous findings from our lab indicate that neurotransmitter levels are modulated in the brain of PTSD animals. The only approved therapy for PTSD is the use of selective serotonin re-uptake inhibitors (SSRI), but their efficacy is marginal. Recently, we demonstrated that over-activation of Norepinephrine (NE) along with Serotonin (5-HT) as the possible reason for the lack of efficacy of SSRI. Hence, there is a need for novel therapeutic approaches for the treatment of PTSD. In this study, we investigated the neuroprotective role of blueberries (BB) in modulating neurotransmitter levels in PTSD. Rats were fed with a blueberry-enriched (2%) or a control diet. Rats were exposed to cats for one hour on days 1 and 11 of a 31-day schedule to simulate traumatic conditions. At the end of the study, the rats were euthanized and PFC and HC were isolated. We measured monoamines and their metabolites by high-performance liquid chromatography. In our PTSD model, NE levels were increased and 5-HT levels were decreased when compared to control. In contrast, a BB diet increased 5-HT without affecting NE levels. These findings indicate non-pharmacological approaches might modulate neurotransmitters in PTSD. Further studies to understand the molecular mechanism of neuro-protection by BB can provide a potential therapeutic target for the treatment of PTSD.

In summary, the traumatized rats that were fed blueberries saw an increase in serotonin levels and the study authors suggest that the non-drug neuroprotection offered by the blueberries may offer support for those with PTSD. Presumably this could help those with anxiety and depression too, since low serotonin can also be a factor in these conditions.

Here are some ways to incorporate blueberries:

Make sure to buy organic blueberries as non-organic are on the Dirty Dozen list and are highly sprayed with pesticides.

I love blueberries! How about you? How do you like to eat them?

PS. We’ll be covering other new food anxiety research on the upcoming Anxiety Summit and hope you can join us.