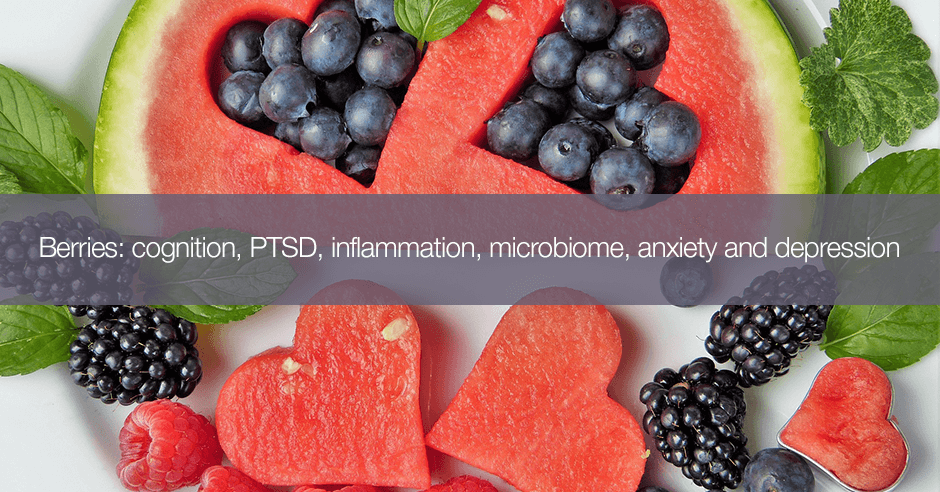 Berries such as blueberries, raspberries, raspberries and strawberries have so many health benefits, including but not limited to improving cognitive function, offering benefits for PTSD (post-traumatic stress disorder), reducing inflammation and even increasing good bacteria in our gut. There are even initial promising results of a compound in blackberries having antibiotic like properties against drug-resistant bacteria MRSA (methicillin resistant staphylococcus aureus).

In a 2017 randomized, double-blind, placebo-controlled trial, dietary blueberries were found to improve cognition among older adults

In this study, 13 men and 24 women, between the ages of 60 and 75 years, were recruited into a randomized, double-blind, placebo-controlled trial in which they consumed either freeze-dried blueberry (24 g/day, equivalent to 1 cup of fresh blueberries) or a blueberry placebo for 90 days.

The findings show that the addition of 1 daily cup of blueberries to the diets of older adults can improve some aspects of cognition, such as

…significantly fewer repetition errors … in the California Verbal Learning Test (CLVT), a neuropsychological test which can be used to assess verbal memory abilities.

… fewer errors on trials when they switched to a new task as part of a task-switching test. Task switching is an important component of executive function, a collection of brain processes that are responsible for guiding thought and behavior.

This research was funded by the U.S. Highbush Blueberry Council.

A study presented in 2016 reports that blueberries boost serotonin and may help with PTSD and anxiety. This was an animal study where the traumatized rats were fed a blueberry-enriched diet. The study authors report an increase in serotonin levels and suggest that these findings

Presumably this could help if you have anxiety and depression too, since low serotonin is often one of the underlying factors.

A 2016 study compared the anti-inflammatory and antioxidant effects of extracts of Lycium barbarum (found in goji berries), Vaccinium macrocarpon (found in cranberries) and Vaccinium myrtillus (found in blueberries).

High amounts of phenolic compounds, including rutin, were identified in all berries extracts. Quercetin was identified in blueberries and cranberries. Hepatic/liver concentrations of glutathione were higher in animals treated with goji berry extracts. Overall the study reports that:

These results suggest that quercetin, rutin, or other phenolic compounds found in these berry fruits extracts could produce an anti-inflammatory response based on modulation of oxidative stress.

We know that inflammation plays a role in mood issues so this is yet another mechanism for supporting your body nutritionally.

There are numerous studies showing the benefits of bifidobacteria probiotics on mood and anxiety. Here are a few of them:

Blackberry compound as an antibiotic against MRSA?

This section doesn’t involve eating blackberries but I’m including it because I just love this story, it’s inspiring and it has not received any coverage in the mainstream media. An article in a local publication reports that Irish teen wins top science prize for blackberry antibiotic that fights resistant bacteria

A 15-year-old science student Simon Meehan of Coláiste Choilm won first place in the 54th BT Young Scientist & Technology Exhibition. His discovery is that chemicals found within blackberries could form antibiotics that kills Staphylococcus aureus – often known as MRSA and well known for being resistant to antibiotics.

And he says his grandfather – a herbalist – was the inspiration that kept him going, keeping a frame picture of him at his side whilst he worked.

Professor John O’Halloran, who helped judge the competition, was fulsome in his praise for Simon’s work: “This is a really exciting project which explores the possibility of the blackberry leaf extracts’ ability to control harmful bacteria. The unexpected findings deliver a unique approach to killing bacteria using natural plant active ingredients.

You can watch a video of Simon Meehan sharing more about this investigation and the result here:

Here are some ways to enjoy berries in your diet:

Make sure to buy organic berries as non-organic are on the Dirty Dozen list and are highly sprayed with pesticides.

How do you enjoy eating your berries and how often do you eat them? 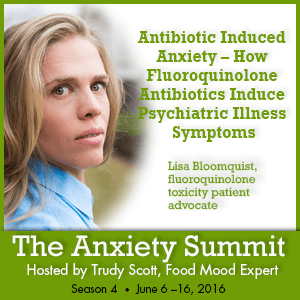 Lisa describes how she was floxed after taking the Cipro antibiotic:

I felt like a bomb had gone off in my body.  My hands and feet swelled up and became incredibly painful.  I went from doing CrossFit to barely being able to walk.  I had big floater going across my eye.   My mouth was extremely dry.  I stopped sweating.  Massive amount of anxiety, just huge amounts of anxiety.  I had other central nervous system problems as well.  Things like I lost my memory and my reading comprehension.  I felt a very profound sense of weakness and fatigue.  And it was just very bizarre.  Like I had gone from being incredibly healthy.  I was very, very healthy prior to taking the Cipro.  And after I took it I felt like I could barely move, I could barely move and I could barely think.  And it was horrible.  It was a really horrible.  It was a very, very hard time in my life.

This is the 2016 paper we discussed: Fluoroquinolone-related neuropsychiatric and mitochondrial toxicity: a collaborative investigation by scientists and members of a social network.

The 3 fluoroquinolone (FQ) antibiotics – ciprofoxacin, levofoxacin, and moxifoxacin – are commonly administered to oncology patients. Although these oral antibiotics are approved by the US Food and Drug Administration (FDA) for treatment of urinary tract infections, acute bacterial sinusitis, or bacterial infection in patients with chronic obstructive pulmonary disease, they are commonly prescribed off-label to neutropenic cancer patients for the prevention and treatment of infections associated with febrile neutropenia. New serious FQ-associated safety concerns have been identified through novel collaborations between FQ-treated persons who have developed long-term neuropsychiatric (NP) toxicity, pharmacovigilance experts, and basic scientists.

Here is the new FDA Drug Safety Communication: FDA advises restricting fluoroquinolone antibiotic use for certain uncomplicated infections; warns about disabling side effects that can occur together

Here are some of the studies we discussed in the interview:

Here are some additional links that Lisa mentioned:

Here is the link to Hacking Fluoroquinolones – an ebook

And the book Lisa mentioned, written by Kerri Knox: The Fluoroquinolone Toxicity Solution