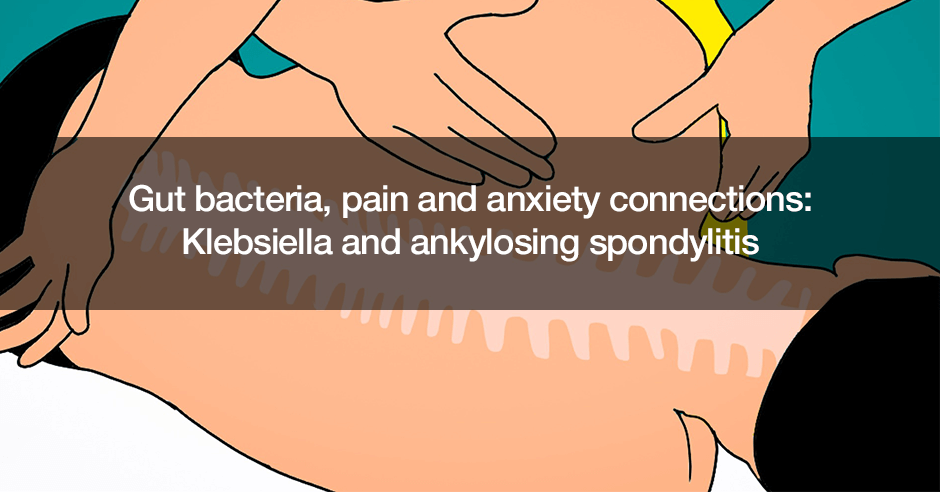 We know about the gut-brain connection where the health of our microbiome impacts how anxious or depressed we feel, but we often forget that there is a gut-pain connection too and how addressing dysbiosis and bad bacteria in the gut can have far-reaching benefits.

An old work friend recently reached out asking for help for her husband who had been diagnosed with ankylosing spondylitis, ulcerative colitis and gluten sensitivity, and was not seeing results with conventional treatment. I did some digging for them and a colleague mentioned that they had addressed Klebsiella when they discovered that her husband had genes predisposing him to ankylosing spondylitis. Read on to see what I’ve learned.

Klebsiella as a precursor to ankylosing spondylitis

The paper shared with me: The relationship between Klebsiella infection and ankylosing spondylitis, discusses the HLA-B27 gene and the Klebsiella connection:

Klebsiella-reactive arthritis is the precursor stage occurring in the early and active phases of ankylosing spondylitis.

Let’s learn more about Klebsiella, ankylosing spondylitis, the anxiety connection and prevalence, the role of neuro-inflammation and genes, the problems of a high carb diet and the role the amino acids GABA, tryptophan and DPA play in pain and anxiety relief and being able to quit the carbs easily, plus provide sleep support.

In case you’re not familiar with Klebsiella, this excellent FX Medicine article describes it as follows:

Ankylosing spondylitis is an inflammatory disease of the spine

In case you’re not familiar with the condition ankylosing spondylitis (pronounced like this) the Mayo Clinic site provides this summary:

Ankylosing spondylitis is an inflammatory disease that, over time, can cause some of the vertebrae in your spine to fuse. This fusing makes the spine less flexible and can result in a hunched-forward posture. If ribs are affected, it can be difficult to breathe deeply.

Ankylosing spondylitis affects men more often than women. Signs and symptoms typically begin in early adulthood. Inflammation also can occur in other parts of your body – most commonly, your eyes.

They say there is no cure and the treatments include pain medications and physical therapy to ease symptoms (and surgery in some cases).

I’m all for physical therapy but you’ll notice there is no mention of gut health or Klebsiella. This is why we have to keep searching for root causes – and work with a functional medicine practitioner – no matter what the health condition, be it ankylosing spondylitis or anything else.

Prevalence of anxiety in ankylosing spondylitis

As with most physical conditions there is a connection with anxiety. This paper: Prevalence of psychological disorders, sleep disturbance and stressful life events and their relationships with disease parameters in Chinese patients with ankylosing spondylitis reports that

We have to ask ourselves if we have anxiety, depression and insomnia because of the pain being experienced or because of one or more of the root causes that contribute to both pain and anxiety.

Often the research focuses on the former but we know that there is Evidence for interplay among antibacterial-induced gut microbiota disturbance, neuro-inflammation, and anxiety in mice. In this 2018 animal study treatment with lactobacilli suppresses this neuro-inflammation.

The above FX Medicine article shares the connection between ankylosing spondylitis, Crohn’s disease and ulcerative colitis, as well as the genetic susceptibility, together with the problems of a high carb diet:

Genetically susceptible people, such as those who have the HLA-B27 allelotypes and consume a high starch/carbohydrate diet, can trigger a growth in Klebsiella in the bowel, the starch becoming a main food supply for the Klebsiella.

The amino acids for pain, carb addition, anxiety and insomnia

The amino acids come into the picture again, helping to ease the pain, provide precursors for neurotransmitter production until the microbiome is balanced, and eliminate carbohydrate cravings so they can be given up without willpower.

As always figuring out your own imbalance and doing an amino acid trial is key. Here is a summary of how they may help in this instance, assuming you have low levels of GABA, serotonin and/or endorphins:

The FX Medicine article has treatment and prevention tips for you to share with your functional medicine doctor, who will be able to run a functional stool test such as the GI-MAP offered by Diagnostic Solutions Lab.

I’d love to hear what has worked for you or a loved one with ankylosing spondylitis and/or if you’ve seen elevated Klebsiella on your stool test or have the genetic predisposition?

Have the amino acids and a low-carb diet helped the healing process and eased some of your anxiety while addressing the underlying Klebsiella infection?