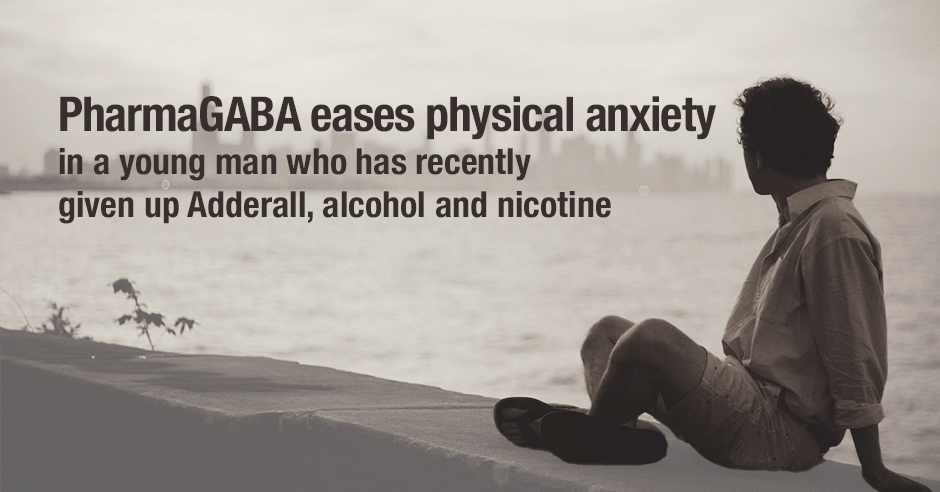 Today’s blog is about a young man diagnosed with ADD (attention deficit disorder) in his early twenties and prescribed Adderal (a stimulant). He was a cigarette smoker and drank alcohol too. His mother shared this encouraging feedback about the recent changes he has made and the benefits he reports with pharmaGABA on a recent blog. She aslo has a question about the GABA timing.

If you’re new to the low GABA type of anxiety, here is a recap: with low GABA the anxiety is the physical anxiety type with stiff and tense muscles and there is often the need to self-medicate with alcohol in order to relax, feel calm and fit in socially. Cigarettes can also be calming for many folks. Anxiety can cause poor focus issues and the inability to focus can drive up anxiety.

Here is her feedback and question:

I have a son that just started GABA after I recommended it from following you all these years. He has given up Adderall, alcohol, and nicotine all this past six months and is feeling so much better than the past ten years of his life. He is 32. He had been diagnosed with ADD in his early twenties.

He has symptoms that fall under low GABA and tried a chewable PharmaGABA 100mg tablet yesterday. He took 2 tablets (200mg total) with his meals three times the past two days and said he felt it work immediately. I told him I thought perhaps on a podcast I heard dosing 30 minutes before meals or an hour after was best?

This was my feedback for this mom about the timing of the pharmaGABA:

I had this encouragement and feedback about quitting and using GABA:

If I was working with young man I would also consider imbalances of other neurotransmitter too (like low serotonin and low endorphins) especially because alcohol and nicotine addictions are so often replaced by sugar and carb addictions.

In this randomized, double blind study, The use of a food supplementation with D-phenylalanine (DPA), L-glutamine and L-5-hydroxytriptophan in the alleviation of alcohol withdrawal symptoms, amino acids were “used to replenish a lack in neurotransmitters and alleviate the symptoms of alcohol withdrawal.”

In the study 20 patients were given these amino acids before quitting alcohol and this combination was found to alleviate withdrawal symptoms. Based on my experience even when will-power is used to quit (as in this case), many of these withdrawal symptoms linger.

Another reason to look at all the neurotransmitter imbalances is that low blood sugar and gut damage is often a factor with drinkers so glutamine may also be helpful for blood sugar stability and gut healing.

Finally, poor focus can also be caused by low catecholamines, so looking into this and considering a trial with tyrosine may also be worthwhile. This may also prevent the caffeine addiction we see once someone quits alcohol too.

Addressing his diet and probable nutrient deficiencies would be the next step for him. Also looking into adrenal health, possible candida and gut issues and food sensitivities.

I appreciate this mom for sharing and applaud her for telling her son about GABA. I also take my hat off to this young man for making these huge changes in his life and being willing to try GABA.

Has GABA or pharmGABA helped ease the physical anxiety you experienced and also helped with focus issues?

Feel free to post your questions here on the blog too.