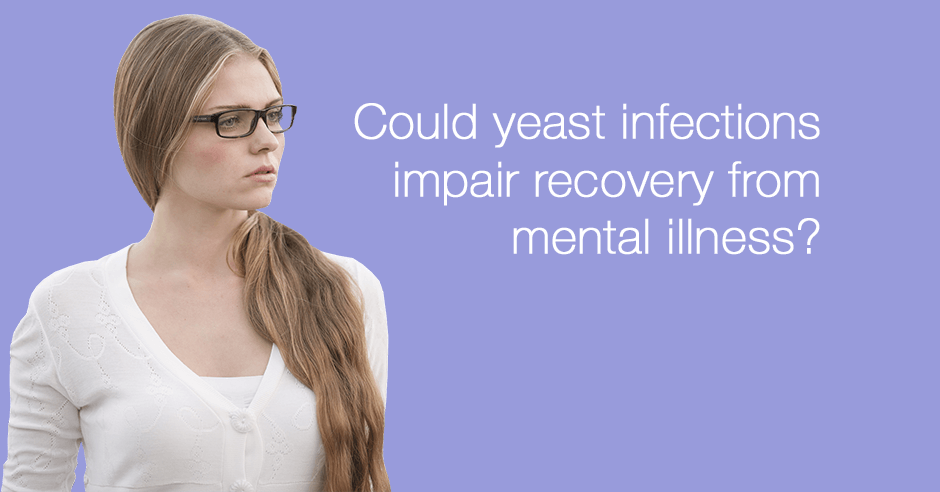 Julia Rucklidge, PhD, is an associate professor in the Department of Psychology, University of Canterbury, Christchurch, New Zealand and has published a number of studies looking at “micronutrients to treat psychiatric disorders including attention-deficit/hyperactivity disorder (ADHD), mood disorders, stress, and anxiety,” where benefits were reported. “Despite the positive benefits associated with micronutrients, some factors may limit a positive response, one of which may be the overgrowth of intestinal Candida.”

In this 2013 paper, Could yeast infections impair recovery from mental illness? A case study using micronutrients and olive leaf extract for the treatment of ADHD and depression the authors discuss the impact of candida on gut health and response to supplementation:

a number of factors influence optimal response and absorption of nutrients, including the health of the gut, particularly the presence of yeast infections, such as Candida.

As part of a wider investigation into the impact of micronutrients on psychiatric symptoms, many participants who experienced a yeast infection during their treatment showed a diminished response to the micronutrients.

One particular female client was followed for a 3-year period:

Kate (an alias) is a 24-year-old female of European descent who had participated in the 2010 trial by Rucklidge et al using micronutrients for the treatment of ADHD. In the past, she had been prescribed methylphenidate [Ritalin] by a psychiatrist but could not tolerate the side effects.

For just over 2 years, while using the micronutrient, she had no ADHD or mood symptoms, other than a mild increase around her period.

About 2.5 years participating in the trial, Kate started to feel increasingly unwell and reported the following:

(1) a chronic sore throat; (2) a constant runny nose; (3) cramps; (4) itchy toes, anus, and vagina; (5) rashes on her legs and groin area; and (6) an overall flu-like feeling. Concomitantly, all her psychiatric symptoms had returned… She was moody, anhedonic (unable to experience pleasure), and chronically irritable and was having cravings for sugary and starchy foods. Kate visited her family physician, who diagnosed Kate with a vaginal yeast infection

Over the next year, it was found that her psychiatric symptoms (ADHD and mood) got worse when she was infected with Candida and then her ADHD and mood symptoms improved once she was successfully treated with olive leaf extract and probiotics.

The study makes this conclusion about the role of inflammation, gut health and nutrient absorption:

This case outlines that micronutrient treatment might be severely compromised by infections such as Candida and may highlight the importance of gut health when treating psychiatric disorders with nutrients.

Given the role that inflammation can play in absorption of nutrients, it was hypothesized that the infection was impairing absorption of the micronutrients.

Candida is always considered as one of many possible root causes with my anxious clients – it can contribute to anxiety as well as ADHD and depression, and out-of-control-sugar and intense carb cravings.

Olive leaf extract is one of many approaches for eliminating candida is more commonly used in Australia and New Zealand.

Another approach is to use garlic and oregano to kill the candida. I have great success with these products from Designs for Health:

In addition to killing the candida and restoring the good bacteria with probiotics, I also use targeted individual amino acids to help reduce the sugar and carb cravings, making it easier to quit the bread, sugar, cookies, cakes and fruit. These amino acids can also help to alleviate some of the anxiety, mood and ADHD symptoms from day one, offering relief and hope right away since eliminating candida is not a quick process:

[all of the above supplements, including Allicillin, Oil of Oregano, various probiotics and an olive leaf product, called Olivirex Combination, can be ordered via my online store – details for creating an account on my supplements page. The category once you login is candida/dysbiosis]

Have you experienced anxiety, depression, panic attacks, ADHD and cravings with candida?

Have supplements that worked in the past stop working while you’re dealing with the candida?

Have you found the amino acids to help with anxiety and cravings while you’re addressing your candida?