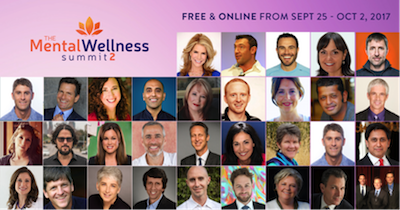 Whether challenged by depression, anxiety, stress, addiction or another mental health challenge, every single person is impacted and affected – you, your family, friends, neighbors and coworkers -either directly or indirectly every single day.

This Mental Wellness Summit 2 will provide you with the information you need to:

My interview covers the dangers of benzodiazepines and why GABA is a more effective option for anxiety.

These medications are commonly prescribed for:

Been totally disabled by benzos for over 3 years. I have been off meds for 17.5 months and the impact of these meds makes any anxiety I ever felt a cake walk. Please run from the poison.

When I turned 21 I went to the doctor for dizziness and they put me on xanax. I started to feel anxious and they then added Zoloft. That was the start of a long journey. I was shifted from one anti-depressant to another. At 34 I was told I was treatment resistant and they added lamotrigine. Then my world crashed at age 37. I have been on xanax, then klonopin, then Ativan, then back to xanax, then valium to taper. I had also been given ambien to sleep in early 30s.

I tapered off meds over a period of a year. I was on 1.5 mg xanax and tapered off valium as prescribed. I have tried many supplements but I react poorly to all of them. I get very agitated and revved up.

I have locked shoulder muscles, neck, jaw; I have internal vibrations, I get bad headaches, jelly legs, distorted vision like floaters and squiggles and fireworks, my teeth all feel like they will fall out but they are not loose, it feels like adrenaline or cortisol rushes through the body. Sometimes my arms go numb. I am pretty tortured every day. These meds are truly causing chemical warfare on some of us.

This is one of the many reasons I do this work – so more people don’t end up in this situation and so everyone knows about the dangers of benzodiazepines and that there are nutritional solutions for anxiety. One of them is the amino acid GABA and I discuss this in the latter half of the interview.

I hope you can join us on The Mental Wellness Summit 2 summit!