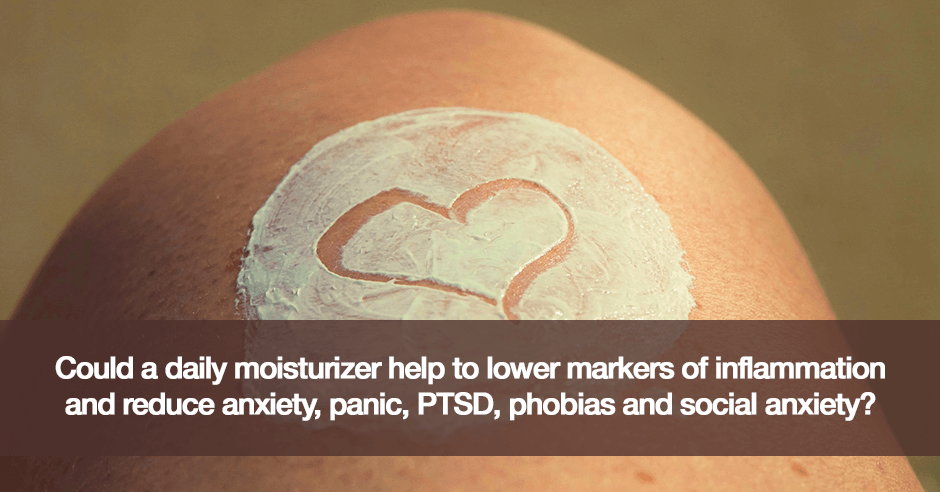 Could using a good quality moisturizer on a daily basis help to lower markers of inflammation (proinflammatory markers) and actually help reduce anxiety, panic, PTSD, phobias, social anxiety and other mental health symptoms, plus other chronic health conditions at the same time? Based on a new pilot study, I’m going out on a limb and saying this may well pan out to be true. And there is certainly no harm in making this a daily self-care routine until further research confirms this, certainly because of the other benefits of using a moisturizer.

Let’s take a look at this new study which reports how using a skin moisturizer actually reduces markers of inflammation in the body: Topical Applications of an Emollient Reduce Circulating Pro-Inflammatory Cytokine Levels in Chronically Aged Humans: A Pilot Clinical Study

Emollients are moisturizers that help keep the skin moist and supple by reducing water loss from the epidermis, the outer layer of the skin.

The study set out to mirror an animal study where skin problems in older/aged mice was tied to elevated markers of inflammation called cytokines. When epidermal function/skin health in the mice was improved, the circulating cytokine levels were reduced:

Changes in epidermal function and levels of three key, age‐related, plasma cytokines (IL‐1β, IL‐6 and TNFα) were measured at baseline and after treatment.

Circulating levels of proinflammatory cytokines in the body, IL‐1β, IL‐6 and TNFα, were higher in the older adults before the use of the emollient. After topical use, i.e, using the cream on their skin twice a day for 30 days:

The University of California explains the mechanism:

Our skin starts to deteriorate around age 50 with changes to epidermal pH, hydration, and the permeability barrier, which keeps water in and bacteria and other potential pathogens out. A loss of moisture and breaks in the permeability barrier cause the skin to release inflammatory cytokines. Ordinarily, these cytokines help to repair defects in the barrier, but in aging skin the barrier can’t be fixed as easily, so the inflammatory signals continue to be released, eventually reaching the blood.

This article and the study authors are suggesting this is an issue to be addressed with older adults and with respect to the above chronic diseases, but there is enough research on the role of inflammation on anxiety and other mental health conditions at any age, that this study had me perk up and take notice. Also, if you’re young and not moisturizing or living in a dry climate or have other factors contributing to inflammation (more on that below), could this be happening too? I believe it’s highly likely.

The role of inflammation on anxiety and other mental health conditions

Here is one of the many anxiety-inflammation studies: Inflammation in Fear- and Anxiety-Based Disorders: PTSD, GAD, and Beyond, reporting that:

Inflammation plays a role in depression too. This paper, Role of Inflammation in Depression and Treatment Implications reports that:

Chronic exposure to increased inflammation is thought to drive changes in neurotransmitters and neurocircuits that lead to depressive symptoms and that may also interfere with or circumvent the efficacy of antidepressants.

Many approaches for reducing cytokines and inflammation

I do want to address the one statement in the emollient study where they say that “approaches that reduce circulating cytokines are not yet available.” There are, in fact, many approaches for reducing cytokines and inflammation.

In one study vitamin D supplementation improved mood, reduced anxiety and lowered markers of inflammation (CRP and IL-10) in female diabetics who had low levels of vitamin D.

In another study looking at anxiety in women with PCOS (polycystic ovary syndrome), probiotics and selenium improved their mental health and hormonal profiles, lowered markers of inflammation and reduced oxidative stress.

Of course, these factors may also play a role in anxiety and using a functional medicine and nutritional approach, you can reduce the inflammation and eliminate the anxiety/depression. It’s a matter of finding your root cause/s and addressing them.

Research is also finding that GABA, one of the main calming neurotransmitters, may also have a possible role in “neuroimmune interaction, being involved in the modulation of immune cell activity associated with different systemic and enteric inflammatory conditions.”

Low zinc and low vitamin B6 are also factors in inflammation, and addressing low levels reduces inflammation and eases anxiety such as pyroluria (a social anxiety condition) and low GABA and low serotonin anxiety because zinc and vitamin B6 are co-factors for making these brain chemicals.

The benefit of touch and a boost of oxytocin

I’d like to mention other benefits of using a daily moisturizer – the benefits of touch, massage and a boost of oxytocin:

I feel very comfortable saying you now we have a new tool – daily skin moisturizing – to add to your toolbox to help lower your markers of inflammation and reduce anxiety, panic, PTSD, phobias and social anxiety. Let’s use everything at your disposal to heal and feel your absolute best.

It’s something most women (and a few men) are already doing, and this information can give you more reason to continue to do it.

It’s a lovely self-care routine if you’ve not been doing it for some time or have never regularly used a moisturizer. This information can be an incentive to add it back to your daily routine or start doing it.

The biggest problem I see with moisturizing is using toxic chemicals and less than ideal creams on your skin so I reached out to colleagues and my community on Facebook to get input on their favorite home-made and store-bought moisturizers:

In the meanwhile, feel free to share your favorites and what your moisturizing self-care routine is like, and if you get regular massages and use moisturizing creams with love ones. Simply comment below.