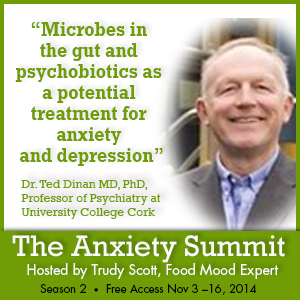 Here is the quote from Dr. Dinan’s article that was co-written with Dr. John Cryan and called Psychobiotics: How Gut Bacteria Mess with Your Mind

In the 20th century the major focus of microbiological research was on finding ways to kill microbes by antibiotics. This century the focus has changed somewhat with the recognition of the health benefits of bacteria, not just from an immunity perspective but from a mental health one.

Here is some of Dr. Dinan’s research:

Do interactions between stress and immune responses lead to symptom exacerbations in irritable bowel syndrome?

Psychobiotics: a novel class of psychotropic.

Here, we define a psychobiotic as a live organism that, when ingested in adequate amounts, produces a health benefit in patients suffering from psychiatric illness. As a class of probiotic, these bacteria are capable of producing and delivering neuroactive substances such as gamma-aminobutyric acid and serotonin, which act on the brain-gut axis. Preclinical evaluation in rodents suggests that certain psychobiotics possess antidepressant or anxiolytic activity. Effects may be mediated via the vagus nerve, spinal cord, or neuroendocrine systems. So far, psychobiotics have been most extensively studied in a liaison psychiatric setting in patients with irritable bowel syndrome, where positive benefits have been reported for a number of organisms including Bifidobacterium infantis. Evidence is emerging of benefits in alleviating symptoms of depression and in chronic fatigue syndrome. Such benefits may be related to the anti-inflammatory actions of certain psychobiotics and a capacity to reduce hypothalamic-pituitary-adrenal axis activity. Results from large scale placebo-controlled studies are awaited.

This is the recent resistance training anxiety study I mentioned: The anxiolytic effects of resistance exercise

This research has shown that resistance training at a low-to-moderate intensity (<70% 1 repetition maximum) produces the most reliable and robust decreases in anxiety.