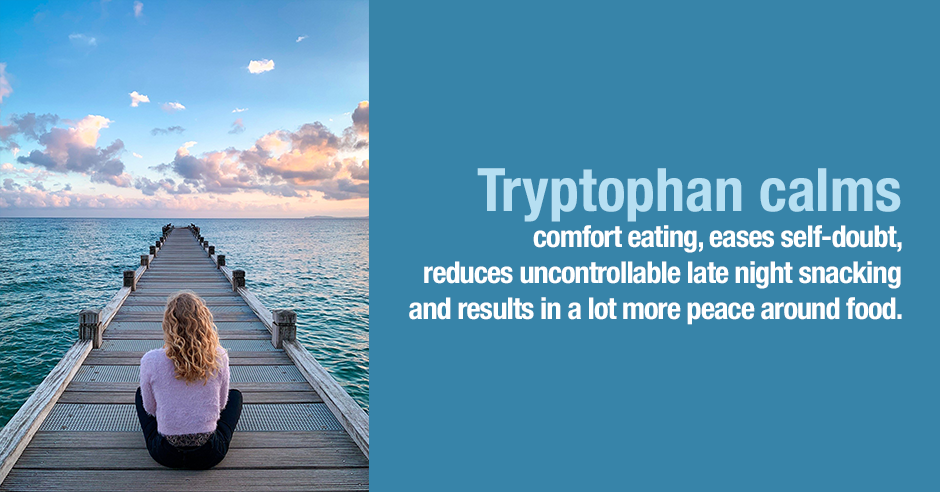 Zoe shares her life long story about comfort eating, her insecurities and self-doubt in her teens, the comfort-foods that allowed her to “escape” and how addressing low serotonin at 41 years of age led to her feeling a lot more peace around food. The effects of one chewable tryptophan were instant! Here is her story in her own words, some insights from me and possible next steps for Zoe to consider.

Historically I had comfort eaten and felt insecure and had lots of self-doubt. This led to trying alcohol and cocaine in my early 20s, plus I’m a vegetarian so I think I blew through all my natural serotonin by the time I tried tryptophan at 41!

I think [low] serotonin was huge for me and tryptophan helped calm my comfort eating.

My comfort eating started at secondary school, around 14, an escape from my feelings when I got home from school. I would eat mashed potatoes with loads of butter or a Sara Lee Chocolate gateau.

Thinking about it now, I realize I was craving carbohydrates and I would eat till I felt sick. I craved feeling really full and sadly was bulimic for a few years there as a teenager. I think my feelings of not feeling good enough/unloved drove me to comfort eating and not feeling understood. I would eat, be sick then do an exercise video before my parents even got home! It may also have been hormonal as I get PMS. I also have PCOS (polycystic ovarian syndrome).

Good news is I tried tryptophan last summer and the effects were instant.

I hadn’t read the instructions properly so ate a Lidtke chewable tryptophan tablet with my meal and instantly felt the effect. I stopped eating and feeling hungry instantly. I took the chewables for a couple of months then went onto Lidtke 500mg for another few months.

I do still have a tendency to snack late at night but it’s gone from totally uncontrollable 8 or 9 out of 10 to a 3 or 4 out of 10. I don’t crave food anywhere near as much as I used to and I have a lot more peace around food now.

Thank you for being the one to introduce me to them, you are a super star.

A few thoughts from me

This is a wonderful outcome and I’m thrilled for her transformation! I also appreciate Zoe giving me permission to share here so you can be inspired and have hope!

A few thoughts from me:

I share where I’d start if we were working together and possible next steps below.

Then she switched to the Lidtke 500mg: “I was taking 500mg mixed with banana on an empty stomach every day for about 6 months.”

This amount of tryptophan would be considered low for most folks. 500mg is a typical starting dose often used 1-2 mid-afternoon and 1-2 in the evening.

You may see all her low serotonin symptoms and think she has a lot going on and will likely need large doses of tryptophan for serotonin support. But you never know how much tryptophan will work until you do a trial.

Zoe actually posted much of the above in response to a question I posted on Facebook about eliminating comfort eating and the amino acid called DPA (d-phenylalanine). DPA typically helps the kind of eating where you feel “I deserve this or this is my reward or this is my treat.” Until you address low endorphins with DPA, you may also feel eating these foods are numbing – as in numbing or blocking emotional pain.

She shared “Yes I’ve tried DPLA and it had a very nice effect.” But as you’ve read above, low serotonin was a bigger issue for Zoe and it was the tryptophan that really helped calm her comfort eating.

But Zoe did see benefits from DLPA:

DPLA made me feel very content with my life. I felt very happy where I was all of a sudden, instead of feeling the need to chase something better all the time. I’ve never had just straight DPA, I’ve found it hard to find.

It’s not uncommon to see low serotonin and low endorphins in situations like this.

Tryptophan is no longer helping: my feedback and other ideas

The tryptophan doesn’t seem to have the same effect on me anymore sadly but that maybe because I’m ‘topped up’ but I did wonder if I had ruined the quality of my tryptophan by storing it on top of my microwave (so they were heating up).

I’ll try the [Lidtke] Tryptophan Complete this time and hope they work as I do still get a bit of PMS which seemed to go away for a while.

I did hear about mixing it with inositol being a possible solution too?

Here is my feedback on some of this, where I’d start if we were working together and possible next steps:

As with everyone, a full functional workup looking at diet, nutritional deficiencies, digestion, all hormones, toxins and infections (and so on) is key to address all possible root causes.

Have you found that tryptophan calmed your comfort eating, reduced your self-doubt and late night carb snacking and led to feelings of peace around food? Did it also reduce PMS and other low serotonin symptoms?

If you’re a practitioner working with women who comfort-eat and have typical low serotonin symptoms, have you found tryptophan to help?