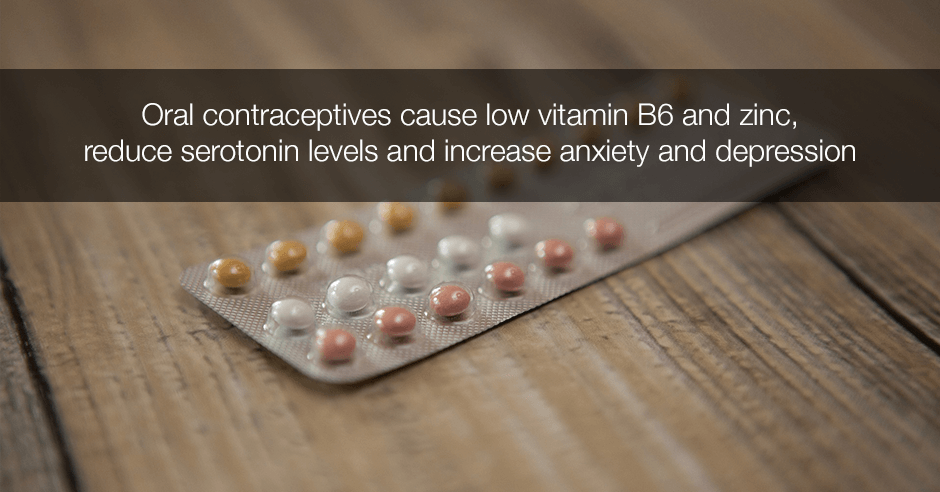 Oral contraceptives i.e. the birth control pill, cause low vitamin B6 and zinc, thereby reducing serotonin levels and can increase anxiety and depression in susceptible women.

Dr. Daniel Amen sees the association between the birth control pill and anxiety/depression in his practice and shared this when I interviewed him during season 3 of the Anxiety Summit.

Unfortunately, they drop serotonin levels. You’ve got to ask yourself why are 23 percent of women between the ages of 20 and 60 taking antidepressants? In large part, it’s the birth-control pills that are changing the hormones in their brain, the neurotransmitters in their brain. All of a sudden they’re more anxious and they’re more depressed.

Oral contraceptives lower serotonin due to various nutrient depletions and can also impact mood due effects on the progesterone/estrogen ratio.

It has been shown that the key nutrient depletions concern folic acid, vitamins B2, B6, B12, vitamin C and E and the minerals magnesium, selenium and zinc.

Zinc, magnesium, folate, vitamin C and vitamin B6 are all needed for the conversion of tryptophan to serotonin and can therefore impact both anxiety and depression, accentuating or precipitating the development of depression (and presumably anxiety too) in susceptible women.

The World Health Organization (WHO) report, Advances in Fertility Regulation, states that:

It has been shown that about 80% of women taking oral contraceptives have abnormal tryptophan metabolism suggestive of relative B6 deficiency.

Many of these same nutrients have a major impact on how women handle stress:

In this paper published in 1980, Serum copper and zinc in hormonal contraceptive users, it is reported that

In users of combined estrogen-progestogen contraceptives the magnitude and time of occurrence of the decrease in zinc levels and the increase in copper levels was unaltered by chemical composition, dosage, route of administration, and duration of use beyond 3 months.

We know zinc plays a role in the serotonergic system, reducing depression and anxiety.

Zinc and vitamin B6 are also key nutrients for alleviating symptoms of the social anxiety condition called pyroluria.

The WHO report mentioned in the 2013 paper (mentioned above), states that this topic of nutrient depletions with oral contraceptives has high clinical relevance and should be receiving the attention it deserves.

Unfortunately, the nutrient-depletion with oral contraceptives conversation is not something many of my clients have ever had with their doctors, despite this being old news. The WHO report was published over 40 years ago, in 1975!

I’m particularly concerned about teens starting on birth control at such a young age and starting down this very slippery slope with no awareness of what they are getting into.

My recommendation is to NOT use oral contraceptives because of this increased risk in depression and anxiety. I write about this and FAM as an alternative here.

However, if you (or your daughter or grand-daughter or sister or friend) chooses to use oral contraceptives we need this awareness and you/they will very likely need to address these nutrient deficiencies.

This awareness is also needed if you are using oral contraceptives (or have used them in the recent past) and have found you’ve needed to continuing using tryptophan or 5-HTP long-term.

And finally, this awareness is needed if you know you have pyroluria and the pyroluria protocol doesn’t seem to be working for you.