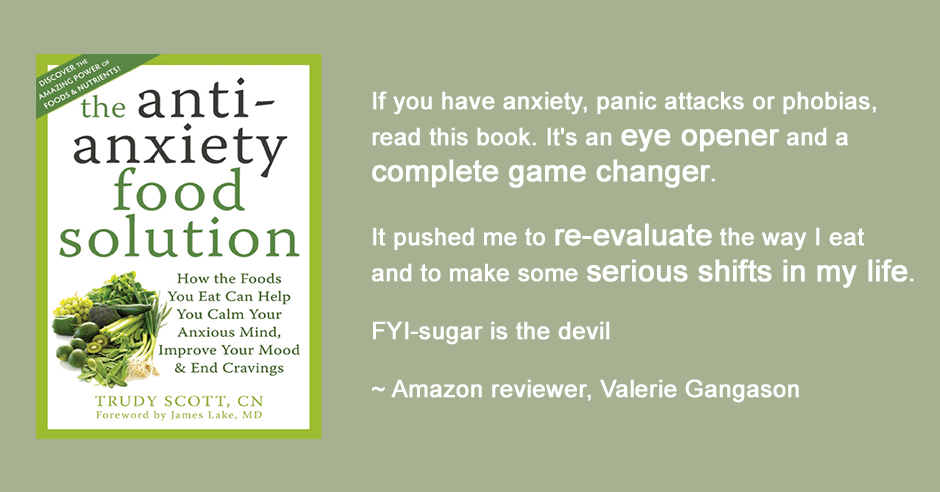 I write multiple blogs each week and the website is a wealth of information (be sure to check the comments too – I love the community feedback and questions and learn so much from you!) BUT the foundation of all that I teach and how I work with my anxious clients is outlined in great detail in my book The Antianxiety Food Solution, so I recommend this essential reading to make the basic food changes (for some people that’s all they need to do), and before using any of the nutrients, and especially before using targeted individual amino acids.

Valerie Gangason posted this wonderful review on Amazon recently: This Book Is a Total Game Changer!!

If you have anxiety, panic attacks or phobias, read this book. It’s an eye opener and a complete game changer. It pushed me to re-evaluate the way I eat and to make some serious shifts in my life. FYI-sugar is the devil

I love the comment about sugar being the devil and commend her for re-evaluating how she eats and for making those serious shifts. It’s how you get results and I ever get tired of feedback like this.

Grab your copy from Amazon here if you don’t yet have it. If you already have a copy I’d love a review on Amazon please! And if you have an older copy with no index you can grab a copy of the index here

Feel free to share your great results or ask questions in the comments.