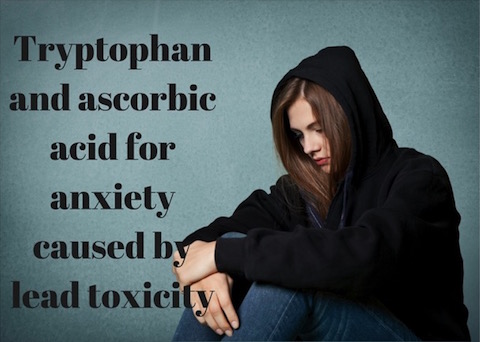 Lead toxicity is a factor when it comes to anxiety, panic disorder, phobias and depression, even with low levels of lead exposure.

In this sample of young adults with low levels of lead exposure, higher blood lead was associated with increased odds of major depression and panic disorder. Exposure to lead at levels generally considered safe could result in adverse mental health outcomes.

The paper discusses a possible mechanism of action i.e. lead disruption of neurotransmitter production (of the catecholamines and serotonin):

If lead exposure contributes to the etiology of these disorders, the mechanism of action could involve perturbation of neurochemistry, such as brain monoamine neurotransmission.

Lead exposure is known to disrupt catecholaminergic systems, and depression and anxiety disorders are strongly associated with disturbances in these systems.

It is surprising that generalized anxiety disorder was not associated with increased lead levels in this study but other research does find anxiety correlations:

Addressing lead and other heavy metal toxicity is not to be taken lightly and can often be quite a lengthy process. Finding a knowledgeable practitioner who understands chelation is important. We covered much of this in my interview with Dr. John Dempster on season 4 of the Anxiety Summit – Anxiety and heavy metals: chelation of mercury and lead

The good news is that while you are working on lead detoxification there is promising research that supports what I see in my clients: using the amino acid tryptophan reduces and often completely eliminates anxiety, panic attacks and depression while you are dealing with other underlying issues. In this instance it’s the lead toxicity but it could also be Lyme disease or gluten sensitivity or Hashimoto’s thyroiditis and many other conditions.

The animal study I’m referring to was published at University of Lagos paper in 2012: Neurobehavioural and neurotoxic effects of L-ascorbic acid and L-tryptophan in lead exposed rats and states that:

Tryptophan ameliorated [or improved] lead-altered neurobehaviour [such as anxiety and aggression].

Co-administration of ascorbic acid and tryptophan on lead exposed rats showed a reversal in all indices assessed towards the physiological state of control. This suggests that ascorbic and tryptophan can be used to compliment chelating therapy in lead neurotoxicity.

I don’t know if you can extrapolate the dosages from the rat to a human weight-wise but since I have a curious mind I did some calculations: it turns out that they used a rough equivalent of 2000mg of ascorbic acid and 1000mg of tryptophan for an adult human. The starting dose for tryptophan is typically 500mg, and less if you’re sensitive or a “pixie dust” person. I would start here and do an amino acid trial, increasing over a few weeks until anxiety symptoms start to resolve. You can read more about the amino acids process here

Have you used tryptophan (or other amino acids like GABA) to reduce or improve anxiety symptoms with success, while dealing with a bigger underlying issue such as lead toxicity?

If you’re a practitioner, have you helped your clients/patients with tryptophan while dealing with lead toxicity?