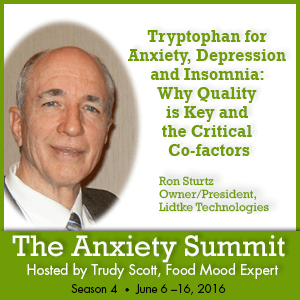 Tryptophan for anxiety, depression and insomnia: why quality is key and the critical co-factors

In part 1 we start by discussing the history, the controversy in 1990 over contaminated L-tryptophan,  the impurities that lead to the EMS outbreak and why Lidtke has “been fanatical about purity and safety” since then:

the main [impurity] was EBT  [1,1′-ethylidene-bis-L-tryptophan] and that was the one that they suspected was the most heavily implicated.  They never could identify exactly which ones were toxic or in combination.  It could be like numbers one, two and five in combination were deadly or two and six in combination more deadly or maybe just six alone was deadly.  They never were able to determine that because they never found an animal model to use in research because when they would feed the rats or any other kind of animal, lab animal they had samples of this known toxic tryptophan, none of them responded the way humans do.  They have a very different gut flora and metabolism and they never responded the same so they weren’t about to use humans in any of these clinical trials so they never really could tell which of those six were the worst, but they strongly suspected that EBT was the worst

Ron covers how glyphosate/Roundup is contributing to low serotonin levels:

…the food crops  absorb the chemical, they still soak it up and then they’re sent to market and you buy them and you cook them and you eat then and then you soak it up.  Well, you don’t produce tryptophan or phenylalanine, but your gut bacteria to do.  And preferentially the beneficial gut bacteria tend to be killed by the glyphosates.  So when that happens the pathogenic bacteria tend to dominate.  And then when that happens when they grow kind of out of control then even more tryptophan is used up by the macrophages, which then attack the pathogens.

If you’d like to read more about this we covered this is much more detail in these interviews:

And we discuss the Tryptophan Complete product, the ingredients and rationale for including P5P, lysine, curcumin, folic acid and niacinamide. This is my feedback on the product:

the Tryptophan Complete is one that I’m not as familiar with as the 500 milligram Tryptophan.  I’ve been using the 500 milligram with my clients for over ten years.  The Tryptophan Complete is just a new one that’s sort of come on my radar and I started looking into it and I actually posted something on Facebook a few months ago and then did a blog post to get feedback from people [see below]. And I’ve had some promising feedback.  I’ve had one person say “I’ve used the Tryptophan Complete and liked it a lot better than the 500 milligrams.  It gave me a much deeper state of relaxation and a way more solid sleep.”  She used that, got benefits then tried the 500 and now has decided to go back to the Complete.  So she feels that the addition of the other ingredients really helped for her body chemistry.  I did have someone else say that she can’t do P5P at all.  It makes her agitated.  So for people who have individual reactions to any of the ingredients then you would go with the 500 milligrams.

Here is my blog: Tryptophan 500mg or Tryptophan Complete (by Lidtke)?

You can also find the amino acid questionnaire (which lists the low serotonin symptoms) and amino acid precautions on the above blog.

Here is some of the research: