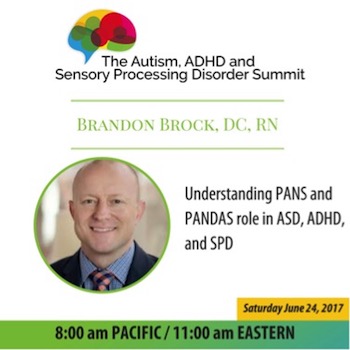 This is a quick reminder that The Autism, ADHD and Sensory Processing Disorder Summit starts tomorrow.

I really enjoyed Dr. Brandon Brock’s interview, Understanding PANS and PANDAS role in ASD, ADHD and SPD, and it is particularly relevant for anxiety and OCD. During the interview he describes what he often finds with these children with PANS (Pediatric Acute-onset Neuropsychiatric Syndrome) and PANDAS (Pediatric Autoimmune Neuropsychiatric Disorders Associated with Streptococcal Infections):

A lot of times the child may come in having nightmares or they just start bed wetting or they’re having fears or a little bit of irritability and they get blamed on all kinds of things. You know they get blamed on maybe a sketchy home environment that’s really not that sketchy, or maybe they just say it’s normal for a child to go through this, or maybe they’re just starting to hit puberty so they’re getting more aggressive. In other words there’s always a reason other than looking at the brain physiology. Why is it changing? Is the brain physiology changing because maybe there is an environmental factor? You know maybe there is some abuse or something. And that does happen.

But on a bigger scale maybe they had some sort of infectious disease, or maybe they had a toxin that got into their body, and it made their immune system react, and it started giving them symptoms like abnormal movements, ticks, especially in the face, lip smacking, hair twirling.

He talks about how these immune reactions to the brain and basal ganglia cause symptoms:

So when you have an immune response against the basal ganglia it’s kind of like pushing the play button over and over and over again. So now we see things like obsessive compulsive disorder, we see tics, we see choreiform movements [repetitive and rapid, jerky, involuntary movement that appears to be well-coordinated], we see nightmares and bizarre thoughts, or the kid does something that we call a perseveration. It is the repetition of a particular response (such as a word, phrase, or gesture), so they say something over and over and over. So there’s a fine line between a kid being a kid and then a kid having something like PANDAS. And really what we call that is auto-immune encephalitis, which just means inflammation of the brain. So the kid’s brain really is kind of like, if you want to say it metaphorically, on fire.

Dr. Brock talks about the 2 strep tests or anti-streptococcal antibody titers that are commercially available and determines whether the child has had a previous strep infection:

In addition to the many other labs tests they do, he goes on to discuss another whole set of antibodies that can become positive down the road:

Dr. Brock goes on to talk about functional neurology, diet, how to find a good practitioner and much more. It’s a great interview!

It will be 10 days of eye opening information into the root causes of your child’s neurological dysfunction. Imagine learning about what may have caused their symptoms and how to address them with nutrition and biomedical approaches and leverage the power of positive neuroplasticity to improve function, health and their lives.

As I mentioned in the prior summit announcement many of the interviews on this summit may be applicable for you even if you don’t have a child with a sensory processing disorder, ADHD and/or autism – many of my clients with anxiety often benefit from the biomedical support that many of these speakers are addressing. Simply replace sensory processing disorder, ADHD and/or autism with anxiety and listen and learn.

And if you’re new to my work, do also tune into my interview: Anxiety’s Role in ASD, ADHD and SPD and how nutrient therapy can help.

Here are a few other speakers and their interesting topics (and I can’t wait to hear them all):

You can register for The Autism, ADHD and Sensory Processing Disorder Summit here