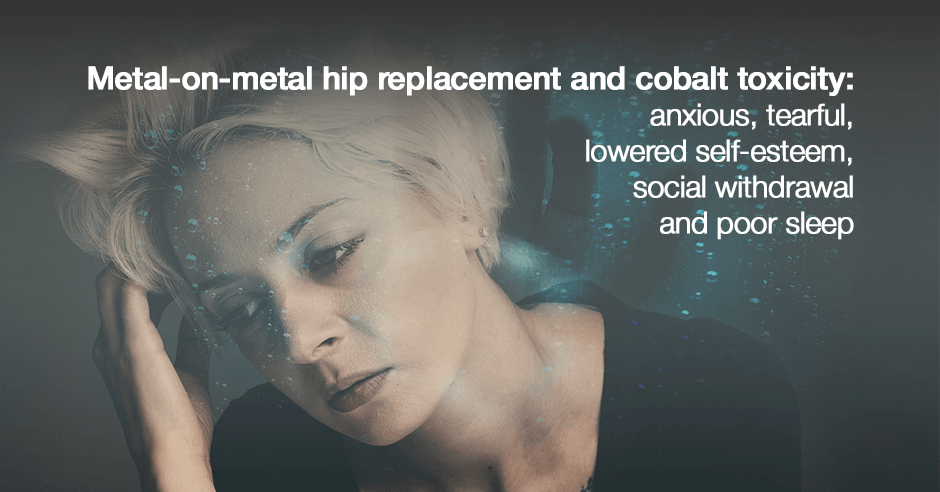 I’m always on the look-out for out-of-the-box root causes for anxiety, insomnia and low mood and the role of targeted amino acids like GABA, tryptophan and tyrosine in easing symptoms clients and boy was I surprised to learn about the connection between metal-on-metal hip replacements and mental health symptoms.

I first learned about this in the new Netflix documentary called The Bleeding Edge which is an “eye-opening look at the fast-growing medical device industry” and “reveals how the rush to innovate can lead to devastating consequences for patients.”

He had developed a tremor and was having a hard time thinking when he decided to scrawl all over the walls and ceiling of a hotel room during a medical conference, eventually using soap as ink.

Tower, his friends and family knew he was in the throes of mental health crisis, but no one was sure why. So, Tower studied himself until he found the answer in a blood and urine sample: his levels of cobalt, a metal used in rechargeable batteries, were more than a hundred times higher than normal.

Tower thought it might be related to his metal-on-metal hip replacement and had it redone. On the operating table, his surgeon found metal sludge seeping from the device before it was removed.

Dr. Tower shares that within a month of having his hip replacement redone his recovery was remarkable – he could think again, and his psychiatric symptoms resolved.

The sad thing is that he actually admits that he would never have believed this could be possible without having had experienced it himself. We see this all too often in the medical profession.

But he is now enlightened and of course he’s passionate about sharing what he experienced and has started documenting similar adverse experiences in his patients. He says the EPA and FDA should be studying this and reporting it and so they should be.

I was curious to find out how serious an issue this was and how long it’s been an issue because surely we’d be hearing more about it.

The paper includes feedback from some of the study participants. This is what two of them shared about their mood, sleep and anxiety post-hip replacement:

Ms. X … persistent anxieties about the need for future surgery and a feeling she must always be cautious about protecting her hip, tearfulness, lability of mood, lowered self-esteem – “I used to be very active and now I feel a mess”, guilt about being a burden on her husband, a fear about the effects of ions on her body and poor concentration.

Mrs. Z … complained of poor sleep with early morning wakening, low mood and emotional lability, social withdrawal, poor appetite, forgetfulness and a tendency to repeat herself reported by relatives, her frustration at being unable to do day to day activities such as cleaning, she felt she was a burden to relatives, and complained of anhedonia [or an inability to feel pleasure in normally pleasurable activities]. She was disorientated in person, was unable to perform serial sevens and was able to register, but not able to retain any elements of a new name and address on cognitive testing.

The study authors state that “in order preserve neurocognitive function implant removal conceivably should be as soon as possible after toxicity is detected.”

They admit it’s a small sample and that some of the depression and anxiety may be typical after a surgery HOWEVER once I looked at how long metal-on-metal cobalt toxicity has been an issue I feel we really need to take this very very seriously. Here are just a few of the studies from 2017 going back to 2011:

And then we have this study reporting toxicity issues as far back as 1999:

Our findings suggest that in total hip replacements using metal-metal pairings, metal ions of the alloys are released. This release may lead to significantly elevated metal concentrations in biological fluids. Long-term studies are needed to determine the risk of metal-metal implants as a potential cause of cobalt and chromium toxicity.

You may wonder how this toxicity problem has been ignored and swept under the rug for so long. If you watch the documentary, you’ll soon see that the medical devices industry is far more powerful than the pharmaceutical industry and has its own set of rules for medical device approval. It’s basically the wild west and the FDA is doing nothing about it (even though it is acknowledged to be a problem)!

I’m not suggesting we shouldn’t be doing hip replacements – they are amazing surgical innovations that give many people their mobility and lives back – but instead I suggest we consider the following:

I have no expertise on what the safest type of hip replacement is and will find an expert for a part 2 of the blog. If you know of someone please do share in the comments.

How do we address the cobalt and chromium toxicity?

How do we address the anxiety, insomnia and associated mood issues?

I recommend using the above amino acids short-term to ease symptoms before the hip revision surgery is done and for as long afterwards as they are needed. And, as always, base the use of the amino acids on trials per the amino acid questionnaire.

Also, work with a thyroid expert for thyroid support which will also help the mood and cognitive issues. And work with a heart specialist to rule out any damage to the heart.

If you’ve had a metal-on-metal hip replacement in the past and have chronic anxiety or cognitive issues (that started or got worse after the surgery), then I encourage you to look into cobalt toxicity as a possible root cause or contributory root cause.

Please feel free to share your experiences with this surgery – both good and bad – so we can all learn. And if the amino acids have helped ease anxiety and mood symptoms and helped you sleep while going through this.

And do let us know what you think about the Netflix documentary The Bleeding Edge.