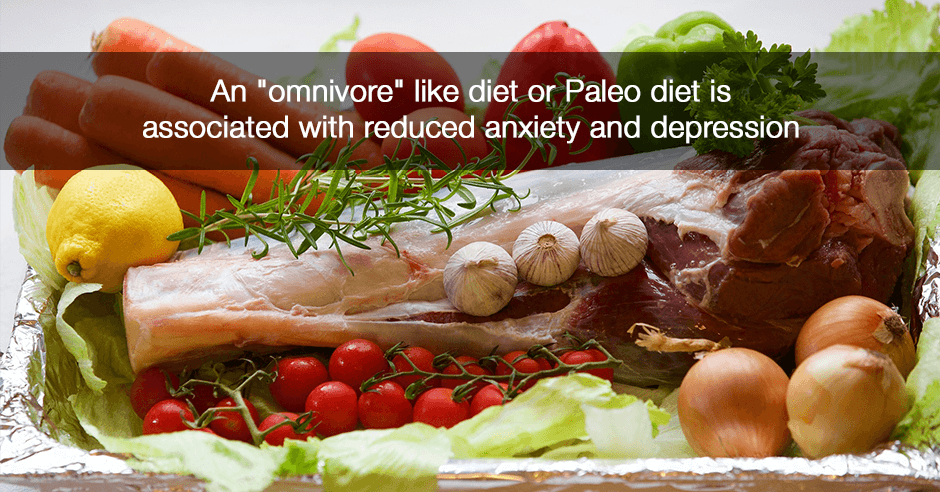 This was a cross-sectional study, meaning it was a type of observational study design where the outcome and the exposures in the study participants are measured at the same time. The aim was to find an association (rather than causal relationship) between patterns of nutrients intake and psychological disorders such as anxiety and depression.

The study authors had 3846 Iranian adults between 18 and 55 of age complete questionnaires in order to assess their diets and nutrient patterns, as well as psychological factors including anxiety, depression, and overall health in general. This group comprised 1712 males and 2134 females.

After calculating the daily intakes of 57 nutrients (including individual amino acids,

in both women and men, with pyridoxine (vitamin B6) high in men only

2) the “grains and dairy” pattern

and low in the following

These are the associations that were observed after adjusting for confounding factors:

This type of diet is also referred to as a Paleo or cave-man type of diet. Even though this study was only showing associations and not a cause-and-effect, it’s still very encouraging to see new research in the field of nutritional psychiatry, further supporting the results we see in clinical practice.

What are the mechanisms?

The high amino acids provide the building blocks for the production of our feel-good neurotransmitters such as serotonin, GABA, dopamine and endorphins, with zinc being a key co-factor for making these brain chemicals. The authors share some of the mechanisms for the association in the discussion section of the paper:

Dietary protein intake and also individual amino acid status have been linked to psychological status in previously published studies. For instance, methionine in the form of S-adenosyl-L-methionine, tryptophan and serine were inversely associated to depression. Lysine, arginine, beta-alanine, tryptophan and tyrosine have been shown to have anxiolytic effects. As amino acids are important precursors for neurotransmitters; they might affect psychological condition. Important neurotransmitters like dopamine and serotonin are made from amino acids tyrosine and tryptophan, respectively.

Pantothenic acid is a B vitamin that is key for stress and adrenal health. Low levels of B12 or cobalamin can be associated with both anxiety and depression, as well as fatigue. Both zinc and B12 are common deficiencies, and more so in vegetarian and vegan diets. The authors discuss some possible zinc mechanisms:

Seeing saturated fat and high cholesterol mentioned in favorable terms in a study – both of which are needed for a healthy brain and for good blood sugar control – is always exciting. The authors discuss these possible mechanisms:

low serum total cholesterol may increase the risk of depression and suicide attempts. It is hypothesized that low cholesterol intake might cause a depressed central serotonergic activity which in turn leads to depression.

Here is my addition to the discussion: in our interview on a prior Anxiety Summit, Dr. Kurt Woeller and I discuss the link between low cholesterol and low oxytocin and the role this plays in anxiety, social bonding and depression.

One area I’m a little confused about is the findings on pyridoxine (vitamin B6). They report it was high only in men in the omnivore group, and not in women. As they report, vitamin B6 is also a key co-factor in the serotonin-tryptophan pathway and we know it’s important for alleviating anxiety- related PMS symptoms in women. It’s mentioned in the concluding paragraph for playing a role in the association for both men and women and yet it is not mentioned in the abstract. I’ll report back as I find out more.

I blogged about anxiety and depression success stories on Paleo and grain free diets around this time last year. I shared Andrea’s feedback about her diet-mood results with a grain-free and high fat diet:

I happened upon a fat loss diet that had me cut out grains, most dairy, and sugar while focusing on mostly meat, fish, fats from nature such as butter, olive, and coconut oils. Nuts, seeds, and legumes were allowed too. These rules made it so I had to avoid processed foods. There was one day a week of eating anything.

Within 6 weeks I was shocked that I got much much more than fat loss. My depression, anxiety, mood swings, sleep issues and all but one pesky health symptom disappeared. I was stronger, faster, and felt energy I never remember having.

If you’re a practitioner have you found this approach works with your clients/patients?