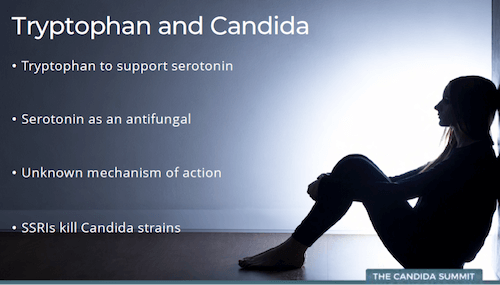 My interview on anxiety on The Candida Summit with host Evan Brand, addresses anxiety, the tie in to low serotonin and the sugar cravings aspect. I was so excited to find a connection between serotonin and candida and share this in our interview.

with low serotonin you’ve got the mental anxiety – the worry, the ruminating thoughts, the obsessive thinking, the reprocessing, insomnia, lying awake in bed, trying to shut down the busy mind. And the two amino acids I use for this is tryptophan; that’s my first choice. And my second choice is 5-HTP. That being said, some people do better on one versus the other.

But let me share some of this interesting research that I’ve found. And why I’m so excited about it is because as I said earlier, I will use the amino acids first before I’m specifically addressing the candida. But it seems like using tryptophan first, as well as helping with the low serotonin, it’s starting to have an impact on the candida, which I didn’t know about, until I did the research for this. So thank you for inviting me to speak. It just reinforces what I know about the amino acids – that they are pretty powerful.

There was a study done in 2003, and the title is Antifungal Properties of Serotonin Against Candida species. And they looked at various different candida strains: albicans, glabrata, tropicalis, and a few others. And they exposed these candida strains to serotonin. The study concludes: “Serotonin showed antifungal activity towards all isolates of candida.”

What they didn’t know is what the mechanism of action was. They stated: “Identifying the mode of action would be of great help in developing and research new antifungal drugs.” I don’t agree with that. I’m just excited to see that there is this connection with serotonin, which reinforces how beneficial tryptophan is.

Of course, my solution is to provide serotonin support via diet, exercise and the use of the targeted individual amino acid tryptophan or 5-HTP.

You can read more about this serotonin-candida connection in my blog post: Symptoms, nutrient malabsorption, worsening psychiatric symptoms and the serotonin connection

In our interview I also discuss how I use the amino acids and how tryptophan/5-HTP as well as GABA, DPA, tyrosine and glutamine, can actually help with so much of the sugar craving we see in candida, PLUS how I use this approach to gauge when candida is really serious.

EMFs and the dangers of 5G – and candida 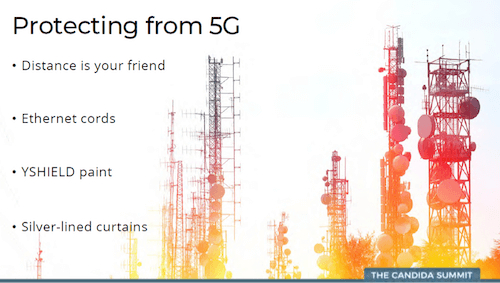 Dr. Schaffner talks about EMFs and the dangers of 5G and shares how they are protecting the Sophia Institute Clinic (which she shares with Dr. Dietrich Klinghardt):

What we have done at the clinic—and again, this is an evolving art—the two things that I think are going to make the most difference in what we can do right now is, first, of course we always say avoid exposure, try to distance yourself. Distance is your friend with any technology, when we’re looking at EMF.

But we do two things that I think people should be aware of. And one is we use a type of graphite paint. It’s called YSHIELD. And that actually comes from Germany. And it has properties to, essentially, try to create a Faraday cage environment and block the incoming microwave radiation. And so, that has to be grounded, of course. And you want to always work with somebody who knows what they’re doing with this technology. Because if you don’t do it right, you can actually increase your exposures or create an unhealthy environment.

And then, Dr. Klinghardt works with the woman who creates these silver-lined curtains that actually help to block the microwave radiation coming in through the windows.

There’s a really great website—LessEMF has a lot of this technology. And then, YSHIELD, you can Google, I think it’s yshield.com. And then, the silver-lined curtains, I believe, is a fabric called, Swiss Shield. And so, you can either make them yourself or hire somebody to do that.

Learn more about candida, low serotonin, low melatonin, and your glymphatic system in the second half of Dr. Schaffner’s interview. 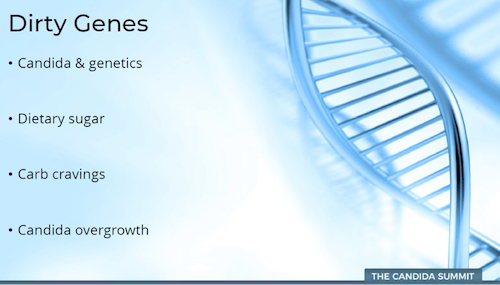 Evan Brand brings up the topic of sugar and carbs in the diet with Dr. Ben Lynch in the Candida, sugar cravings and COMT and MAOA genes interview: No one is discussing the influence of the whole epigenetic piece, and how people and their decision making with foods could be influenced by their genes?

Dr. Ben Lynch shares how he has a unique angle on this fascinating topic of our genes and sugar/carb cravings:

It’s one that always ties back to what came first—the chicken or the egg, right? So what came first, the genetic propensity towards carbohydrate binging or addictive personalities for high-caloric dense foods like ice cream and cakes, doughnuts, pastries, which then leads us to candida?

And then, they go on all these candida treatments. And they beat it. And they’re all happy again. But then their genetic propensity drives them yet again for the yeast overgrowth and the food binging.

He gives an example of how some people, when they’re down and out, may be drawn to sugar and carbs to self-medicate (this is something I see with my anxious clients all the time):

You’re not really aware of it, but you just do it. And you know you shouldn’t do it. But what happens here is, is some individuals, they have genes, which eliminate their dopamine out of their body pretty quickly. This gene is called COMT. And one of its jobs is to move dopamine out. You don’t want to always have neurotransmitters in your brain. That’s not good.

So some of these folks are born with a COMT gene that actually works faster, which is really good because they can calm down really quick in stressful environments. They can perform at a high level in stressful situations like surgeons, or EMT, or firefighters, or policemen, policewomen. They strive in these high-risk, highly-attentive situations.

But when they come home, everything’s a low normal. And they need that hit of dopamine. So they might come home and binge on sugars and carbs to drive their dopamine back up. And that’s a significant one.

Dr Lynch also shares about another gene, MAOA, which deals with our serotonin:

If you have a faster MAOA gene, which moves through your serotonin, then you are craving carbohydrates, and you’re craving pastas, and breads, and all the things that candida love, and beer. These things which increase your tryptophan levels, support your MAOA, and thus your serotonin. These are two major foods that our candida love. And these are two very, very common genes in the population which predispose us to having these issues 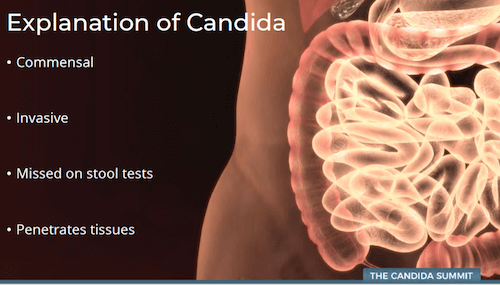 Evan Brand asks this question about candida testing in the Candida, Mitochondrial Dysfunction, and Meditation interview with Dr. Dan Kalish: I’m guessing your statistics are similar to mine, 9 out of every 10 organic acids I find Candida overgrowth. Stool test, the GI map is missing a lot of Candida. Maybe you could help me understand why that’s happening.

Dr. Dan Kalish shares why candida testing can be challenging:

Because Candida can be commensal where it’s growing within the digestive tract itself, or it can be invasive where it penetrates into the tissue of the gut. And then it’s not going to be found in any of the stool tests. So stool tests can miss it easily. And in fact, the more severe it gets, the harder it is to find on a test.

That’s what happens with the yeast when it gets bad. It gets invasive. It goes up into the actual lining of the gut. So if it penetrates there, it causes leaky gut. But then it’s invasive, so it’s penetrating into the tissues. And you’re not going to see it in the stool. And that’s when it gets worse. In fact, it’s going to cause more symptoms. But then it’s almost impossible to find on the stool test.

He also shares this gem about intractable yeast overgrowth that just won’t go away:

You can have a Candida overgrowth, treat it and feel better, but have there be another underlying cause for the Candida. So there’s a lot of patients that will come to me and be like, “I had this Candida overgrowth. As long as I eat this radical and extreme and ridiculous diet, and take all these herbs, I’m fine. But every time I stop, it just comes back.”

Then, that leads the person to assume that it’s this horrific Candida overgrowth that’s never going to go away. And in those patients, there’s almost always Giardia, or Crypto [Cryptosporidium], or E. histo [Entamoeba histolytica], or some other bug that’s screwing up the ecology of the gut that’s allowing the Candida to keep coming back. So that’s just something to be on the lookout for.

If you feel like you have this intractable yeast overgrowth that just won’t go away, you should find a functional medicine doctor and do all the stool testing. Because you’re almost guaranteed there will be some other infection.

Click here to register for The Candida Summit which runs online from July 9-15, 2018!

Do share if you’ve successfully addressed candida overgrowth and how your symptoms improved and how bad your sugar cravings were.

Let us know if you’re EMF-aware and how addressing low serotonin has helped you.

If you have questions post them below in the blog comments.