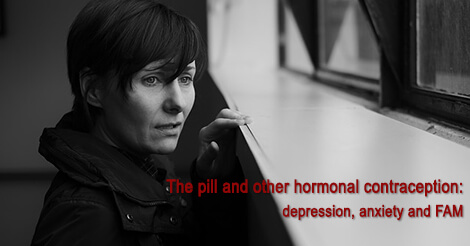 Women taking the contraceptive pill and other hormonal contraception are more likely to be depressed. These are the findings from a Danish study published in JAMA Psychiatry and reported in an article on PubMed Health.

This was a large prospective cohort study which aimed to investigate whether using hormonal contraception is associated with the future use of antidepressants and a diagnosis of depression.

More than 1 million women aged 15 to 34, with no prior history of depression, were included in the study [and followed for 13 years].

The researchers compared users of hormonal contraception with non-users and found users were more likely to be prescribed antidepressants and diagnosed with depression.

This study found that those women who used the pill were 23% more likely to use antidepressants.

And here are the connections between antidepressant use and these other birth control methods (categorized by estrogen type and dose, progesterone type and the method of contraception):

The study authors state this:

it’s important to note this study is not able to prove that the contraceptive methods are responsible for the depression, only to find possible links to investigate further.

The researchers don’t advise that women should stop using their contraception, just that further studies are needed. If this association is found to be true, depression may have to be added as a possible side effect of hormonal contraception.

My fellow nutritionist Karla Maree says this: ‘we’re going to need black box warnings on these medications” and I agree. It’s disappointing that the researchers say further studies are needed.

Dr. Daniel Amen sees the association in his practice and shared this about birth control pills when I interviewed him during season 3 of the Anxiety Summit.

Unfortunately, they drop serotonin levels. You’ve got to ask yourself why are 23 percent of women between the ages of 20 and 60 taking antidepressants. In large part, it’s the birth-control pills that are changing the hormones in their brain, the neurotransmitters in their brain. All of a sudden, they’re more anxious and they’re more depressed.

Birth control pills also can drop magnesium. Magnesium is a natural calmer to nerve cells. They literally can change things.

We know the pill can also deplete vitamin B6 and folate, and can raise copper levels so these are likely some of the additional reasons we see mood changes in women taking them.

You may have noticed that Dr. Amen mentions 23 percent in our interview – which was actually done in May 2015. He is referring to a 2011 report released by the National Center for Health Statistics:

It’s quite strange how many of my clients don’t think of birth control as having side-effects or being as “bad” as other medications. This was certainly the case for me. I’ve very seldom taken medications in my life but I did use the pill and then an IUD for a short while, and initially I didn’t give either a second thought. But I’m sure they were part of the perfect storm that contributed to my anxiety and panic attacks in my late 30s. I was prescribed an antidepressant at this time but chose not to take it, instead searching for nutritional solutions.

During my search for answers, I read tons of books and one book has had a huge impact on me: Taking Charge of Your Fertility by Toni Weschler. It offered a powerful non-hormonal option for birth control: the Fertility Awareness Method or FAM and gave me so much insight about my body and hormones. It’s also something I now share with my clients. It deserves an entire review so stay tuned. For now, you can check out an overview on her website.

My version of the book was published in 1995 and Toni now has a new revised 2015 edition: Taking Charge of Your Fertility, 20th Anniversary Edition: The Definitive Guide to Natural Birth Control, Pregnancy Achievement, and Reproductive Health. 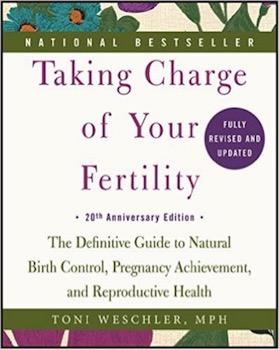 What about you? Do you consider birth control more acceptable than other medications? Are you or were you on birth control and an antidepressant? And do you/did you feel that the birth control affected your mood and contributed to your depression or anxiety?

Or did it improve your symptoms (some women do report a better mood)?

Have you considered or used FAM as an alternative method of birth control? (or pregnancy achievement?)

Have you been offered birth control because of heavy periods or PMS? There are better ways to deal with this and one approach would be to address low serotonin levels with tryptophan.

If you’re in menopause and have no need for this information, please pass it on to your daughters and grand-daughters, nieces, sisters and girlfriends.