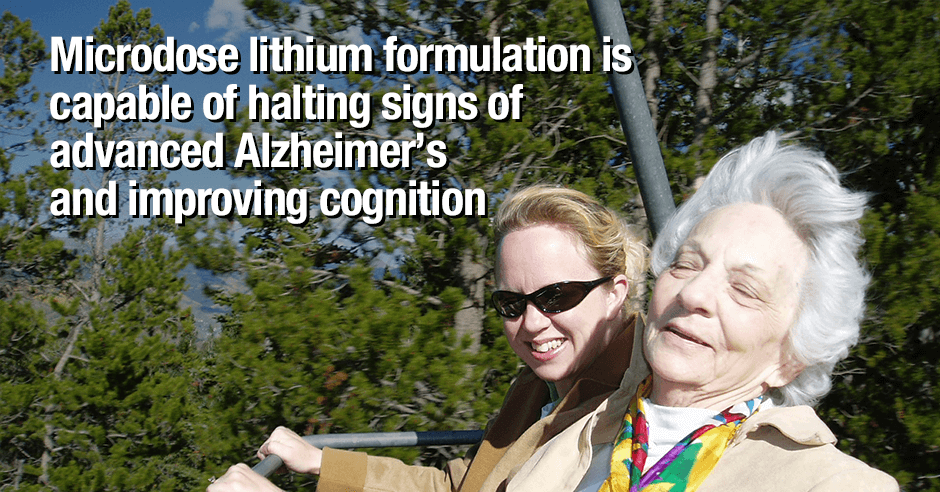 In a new study, a team of researchers has shown that, when given in a formulation that facilitates passage to the brain, lithium in doses up to 400 times lower than what is currently being prescribed for mood disorders is capable of both halting signs of advanced Alzheimer’s pathology and of recovering lost cognitive abilities.

The above snippet is from a press release published last month on Science Daily: Can lithium halt progression of Alzheimer’s disease? Keep in mind that this is an animal study but the results are so promising.  I’m also very intrigued by the delivery method (more on that below).

In order to give this microdosing context, a typical adult prescription for is 900-1800mg lithium carbonate/day.  I reached out to the lead author for clarification about the dosing of this new formulation and lead researcher Dr. Cuello shared this with me:

I calculate that our lithium dosage is 285 times lower concentration than the 900 mg dose (based on 70 kg of body weight) and 570 times lower than the 1800 mg dose.

NP03 is a disease-modifying nano dose formulation of lithium citrate which is used sublingually. I assume it’s not yet commercially available.

Also from the press release: “our findings show that microdoses of lithium in formulations such as the one we used, which facilitates passage to the brain through the brain-blood barrier while minimizing levels of lithium in the blood, sparing individuals from adverse effects, should find immediate therapeutic applications.”

Can we compare NP03 to low dose lithium orotate?

What is really interesting is that low dose lithium in the form of lithium orotate is commonly recommended by integrative practitioners for anxiety, mild mood swings, brain fog, ADHD and insomnia. I have found it to be extremely beneficial for many of my clients and have used it personally with success (for brain fog and insomnia).

Just how much lithium orotate is low dose? Typical doses are 5-10 mg per day, increasing to 20mg per day.

Can we compare NP03 to low dose lithium orotate? It’s too early to know for sure but we I believe we can start to make extrapolations, especially given that both are very low doses.

Integrative psychiatrist, Dr. James Greenblatt, MD has written extensively about low dose lithium orotate for the above purposes and for Alzheimer’s too. In this article, Lithium: The Cinderella Story About a Mineral That May Prevent Alzheimer’s Disease, he shares that

Scientists first became interested in the use of lithium for treating neurodegenerative disorders when they observed that bipolar patients using lithium therapy seemed to have lower rates of cognitive decline than peers on other medications.

works as a direct GSK-3 inhibitor… halting inappropriate amyloid production and the hyper-phosphoryation of tau proteins before they become problematic.

If all this fascinates you as much as it does me, Dr. Greenblatt writes more about lithium orotate in his excellent book: “Nutritional Lithium: A Cinderella Story: The Untold Tale of a Mineral That Transforms Lives and Heals the Brain” (my Amazon link).

Alzheimer’s and cognitive decline have many root causes

Keep in mind that Alzheimer’s and cognitive decline have many root causes that must be considered. This may include inflammation, stress and candida, and even insecticide exposure.

Benzodiazepines have also been linked to increased Alzheimer’s risk which is why a nutritional approach for anxiety is the best approach. Let’s use the amino acids like GABA (for physical anxiety), and tryptophan (for worry and fears), as well as dietary changes and improving gut health instead of anti-anxiety medications.

The best Alzheimer’s book is “The End of Alzheimer’s: The First Program to Prevent and Reverse Cognitive Decline” by Dr. Dale Bredeson (my Amazon link). He doesn’t mention lithium orotate so I look forward to hearing his thoughts on this new research. [I’ll come and update the blog when I do]

You can read about some of Dr. Bredesen’s work here: Alzheimer’s disease, mercury and mycotoxins

I would also love to see lithium orotate compared to NP03 in future research.

In the meantime I feel this early research is exciting because it supports some of what is being seen clinically with lithium orotate.

Have you used lithium orotate with success? How much has helped you and have you seen cognitive benefits? What about a more even mood, better sleep and less anxiety?

And have you or a family member seen improvements with the Bredesen protocol?