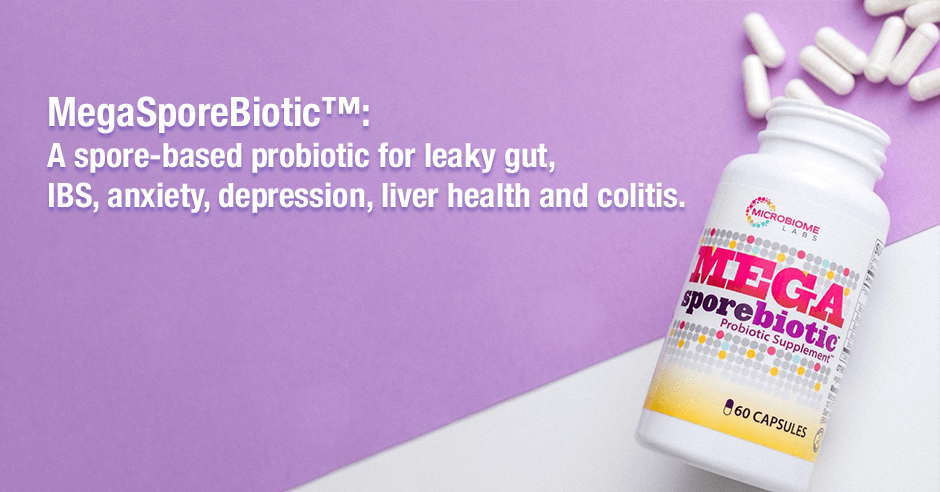 MegaSporeBiotic™ is “a 100% spore-based broad-spectrum probiotic shown to maintain healthy gut barrier function” i.e. leaky gut. Research and clinical results show it is promising for irritable bowel syndrome (IBS) or SIBO (small intestinal bacterial overgrowth), recovery from liver injury caused by acetaminophen, and is protective in ulcerative colitis (an inflammatory bowel disease). Given the gut-brain connection and the fact that the majority of serotonin is produced in the gut, it’s not surprising that spore-based probiotics may also help ease anxiety and depression.

Here are some of the studies supporting this spore-based probiotic for gut issues:

The key findings of the present study is that oral spore-based probiotic supplementation reduced symptoms indicative of “leaky gut syndrome”.

The results demonstrated that patients treated with MegaSporeBiotic, compared with those treated with rifaximin followed by nutraceutical or low-FODMAP diet, had similar severity scores and rectal volume sensation test results for all parameters tested and statistically significant improvement in measurements of quality of life.

This is important because “Acetaminophen  is one of the most used analgesics [pain-reducing] and antipyretic [fever-lowering] agents in the world. Intoxication with acetaminophen is the main cause of acute liver toxicity in both the US and Europe.”

Pretreatment with probiotic spore-forming Bacillus strains and a supplement of amino acids in combination with immunoglobulins exhibited anti-inflammatory and antioxidant effects in an AA-induced rat model of ulcerative colitis.

In one study, Bacillus coagulans (one of the spore-forming strains in MegaSporeBiotic™), when used alone was shown to help ease depression and gut problems in IBS patients. It was a randomised, double-blind, placebo controlled, multi-centre, pilot clinical study and:

The improvement in depression and IBS symptoms was statistically significant and clinically meaningful. These findings support B. coagulans MTCC 5856 as an important new treatment option for major depressive disorder in IBS patients.

During The Anxiety Summit 5: Gut-Brain Axis, I interviewed Kiran Krishnan who is a microbiologist, one of the founders of Microbiome Labs and a co-creator of MegaSporeBiotic™. He reminds us about the gut-brain connection and how anxiety and mental health issues come from the gut “because the vast majority of serotonin in your body – more than ninety percent of it – is actually produced in the gut” and not in the brain.

You can see a list of all the low serotonin symptoms here.

Brandy Oto, a marriage, couple and family counselor, incorporates  an integrative nutrition approach with her clients and she shares this:

MegaSporeBiotic™ makes a HUGE difference in my body! I have used every probiotic I can think of. Megaspore has not only resolved my digestive issues and allows me regular bowel movements, I find my mental health is much better! I have decided to use it in my practice as well now. Clients consistently report better mental health!

I asked her how quickly she notices an improvement when using MegaSporeBiotic™ and what aspects of mental health improve for her and her clients. She shares this:

I personally notice physical and mental anxiety decrease usually about 4-5 days, bowel movements easy within a couple days, ability to tolerate foods I was sensitive to after 6 or so months on them.

Clients report all types of improvements from anxiety, depression, to digestive issues improving. I have even heard from one client that when she gets off the probiotic symptoms of schizophrenia return.

In Brandy’s mental health practice, she does use amino acids to address neurotransmitter deficiencies too (for example tryptophan or 5-HTP to address low serotonin symptoms like worry, fear, panic attacks). She uses this spore-based probiotic to address underlying issues that cause those deficiencies.

It’s not one or the other – the probiotics and amino acids are part of a comprehensive plan.

Not everyone raves about this probiotic and some folks report it either does nothing for them or is too strong for them. So, as with everything, it’s very individualized.

How do spore-based probiotics differ from other probiotics?

During the Anxiety Summit interview with Kiran, he explains how they differ from other probiotics and why this is important for them to get into the gut:

These are organisms that have a unique capability of covering themselves in a thick calcified protein-like coating. So it’s armor, essentially, around the bacterial cell.

This allows these bacteria to come in through the gastric system, through the oral route, and survive the gauntlet that bacteria have to go through just getting through the process of digestion.

So the first step is the stomach acid. The stomach acid is called the gastric barrier and that’s because it acts as an actual physical barrier through the function of hydrochloric acid to try to kill off as many microbes that are trying to enter the system through food and other exposure.

If something gets past the stomach acid then the second piece of the gauntlet are the bile salts. Bile salts are released into the duodenum itself. Those are very strong antimicrobials and part of their function is to act as an antimicrobial to protect the system against a lot of bacteria coming in on a regular basis.

And then the last part is the pancreatic enzymes that help you digest your food – they also act as antimicrobials.

So there’s this really difficult gauntlet that the microbes that are entering the system through the oral route have to go through in order to make it past these initial systems to get to the site of action in the deeper part of the intestines where they’re supposed to function as a probiotic.

These spores have developed this unique, natural capability of covering themselves in this armor which allows them to survive through all of that.

Where can I buy MegaSporeBiotic™? 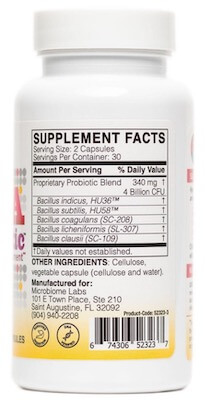 You can purchase MegaSporeBiotic™ directly from Microbiome Labs once you have set up an account with them under my name. Use this link (and make sure the Direct2Patient™ Code says tscott).

You can also read more about the product on the Microbiome Labs site here.

If you already have an account with Fullscript, my online supplement store, you can purchase from there too.

If you don’t yet have an account with Fullscript you can read more about how to set up an account here.

Let us know if you’ve used MegaSporeBiotic™ with success and how it helped you with anxiety, depression and/or gut and liver health.

Let us know if you’ve used another spore-based probiotic and which one? Or do you have a favorite probiotic that is not spore-based?

I’m going to a product review like this once a month so please let me know if you like this format with research, feedback and mechanisms.  And let me know what other products you’d like me to review.

[The above statements have not been evaluated by the Food and Drug Administration. These products are not intended to diagnose, treat, cure or prevent any disease.]