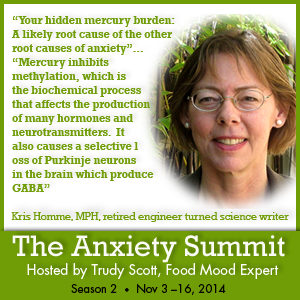 Your hidden mercury burden: A likely root cause of the other root causes of anxiety – part 1

Mercury inhibits methylation, which is the biochemical process that affects the production of many hormones and neurotransmitters. It also causes a selective loss of Purkinje neurons in the brain which produce GABA.

Mercury is known to concentrate in glands, including the thyroid and blocks the enzyme that converts T4 to T3. Also, your mercury burden is a chronic stressor that seems to provoke symptoms of adrenal fatigue.

Erethism: It’s the mercury personality, and that involves excessive timidity, diffidence, shyness, conflict avoidance, loss of self-confidence, anxiety, a desire to remain unobserved and unobtrusive, a pathological fear of ridicule and explosive loss of temper when criticized. There are different versions of this definition and they’re all fun and they really resonated with me, so that can be interesting to look that up on the internet.

Kris has gathered some additional information into this document – Chronic mercury poisoning: A brief summary of the science

It was lovely to recently meet Kris. After enjoying a nice cup of herbal tea with her, she shared a few things about mercury toxicity in her pretty back garden. Here is one of the videos we did – enjoy!

Here is a link to part 2 of this discussion- what to do and additional resources.