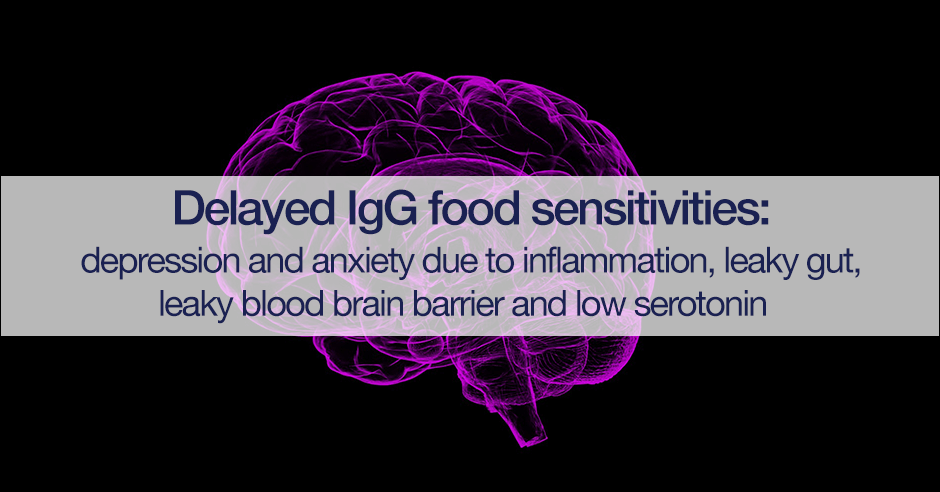 The following diagram and excerpt illustrates the gut-immune-inflammatory-brain model for depression that is associated with food IgG hyperreactivity or sensitivity. 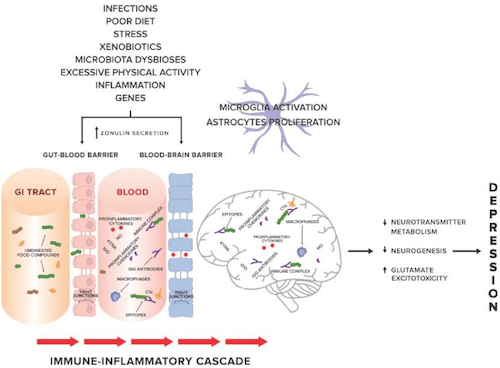 The gut-immune-inflammatory-brain model for Major Depressive Disorder associated with food IgG hyperreactivity. According to the hypothesis proposed in our previous work, we present a possible mechanism underlying the MDD [major depressive disorder] development, suggesting that the interplay between genetic and environmental factors may lead to disruption of tight junctions, the loss of their integrity and both gut and BBB [blood brain barrier] permeability. Undigested food compounds, which would normally break down in the gut, translocate into the blood circulation, and trough epitopes combine with food IgG antibodies to form immune complexes. This, in turn, provokes an abnormal response and triggers immune-inflammatory cascade. Uncontrolled release of the proinflammatory mediators may contribute to low-grade systemic inflammation and low-grade neuroinflammation, which, via pathological processes in CNS [central nervous system], i.e., changes in neurotransmitter metabolism, neurogenesis, glutamate excitotoxicity, may in consequence induce and then maintain and prolong depression.

I wrote my book, The Antianxiety Food Solution, in 2011 and there wasn’t research on the gut-immune-inflammatory-brain model, but I do write extensively about delayed IgG food sensitivities (as well as other types of food issues). If you don’t have my book I’m including some of the highlights related to this (and I encourage you to pick up a copy too!). If you do have my book I hope this next section encourages you to go back and read chapter 4 again (and even check out the other books I mention below).

I write about how with delayed food reactions, it may take a few hours to several days before symptoms appear, which can make it difficult to identify the offending food or foods. In these reactions, the body responds by creating a type of antibody known as IgG (immunoglobulin G).

I also write about how food sensitivities can have effects beyond physiological symptoms, including creating imbalances in key chemicals in the brain, which can cause anxiety, phobias, depression, irritability, and mood swings. When food sensitivities have these effects, they are sometimes termed “brain allergies” or “cerebral allergies.” Dr. Carl Pfeiffer wrote extensively about this and used these terms in his wonderful book, Nutrition and Mental Illness, way back in 1987. (This book is a quick read and is one of my favorite older books on the subject of mental health and biochemical imbalances.)

I also reference the work of my colleague and friend, clinical nutritionist Liz Lipski. In her 2004 book, the 3rd edition of Digestive Wellness she shares that

24 percent of American adults claim they have delayed food and environmental reactions.

She feels that these sensitivities are often the result of leaky gut syndrome, a condition characterized by damage to the microvilli lining the intestinal walls. This allows undigested food particles to travel across the intestinal wall and into the blood, where the immune system responds to them as foreign, harmful substances and creates antibodies to neutralize them.

All this sounds very similar to what the new study is reporting doesn’t it? I’d prefer it not to take so long for the knowledge from as far back as 1987 to get into mainstream journals but it’s the world we live in and we can just appreciate that we are moving forward and in the right direction!

The 2018 paper mentioned above concludes the following:

Our findings suggest more common food-specific serum IgG hyperreactivity among patients with IBS and MDD [major depressive disorder], which may be one of the mechanisms leading to the development of immune activation and low-grade inflammation observed in these disorders.

They do support an elimination diet for IBS but not for depression:

I do love research, but this really bothers me as it’s just common-sense and we do have some case studies supporting the use of elimination diets. In this case study the patient’s “treatment-resistant” depression improved considerably with an elimination diet, with similar results in another case study where a gluten-free elimination diet improved both anxiety and depression and everyday functioning.

In the meantime, we’ll continue to rely on the wisdom of practitioners like Dr. Pfeiffer and Liz Lipski, and all the clinical evidence showing how an elimination diet does help with both depression and anxiety. Just read some of the success stories on this blog – Paleo and grain free diets: anxiety and depression success stories.

There are other mechanisms that I also cover in my book – nutrient malabsorption and a more direct impact on serotonin production.

One possible mechanism is indirect effects of gastrointestinal damage due to eating problem foods, resulting in nutrient malabsorption. In a 2009 double blind placebo-controlled study:

65 celiac patients aged 45-64 years on a strict gluten-free diet for several years [and showing signs of low folate, low vitamin B12 and low vitamin B6] were randomized to a daily dose of 0.8 mg folic acid,0.5 mg cyanocobalamin and 3 mg pyridoxine or placebo for 6 months

I doubt folic acid or this form of B12 would be used today but even with these forms at these low doses, the study participants showed homocysteine in a good range and reported improvement in general well-being – after just 6 months of supplementation.

Another possible mechanism is the fact that gluten sensitivity and the resulting damage to the gut can limit the availability of tryptophan and therefore lead to decreases in levels of serotonin. Research published in 2005, Gluten-free diet may alleviate depressive and behavioural symptoms in adolescents with coeliac disease: a prospective follow-up case-series study, reports that:

In addition to removing the foods that are causing the sensitivities, you need to heal the gut and boost serotonin levels with a targeted individual amino acid like tryptophan.

Give the link between anxiety and depression, all of the above could apply if you have anxiety too.

Have you had IgG food sensitivity testing and found that an elimination diet helped reduce your depression or anxiety symptoms?