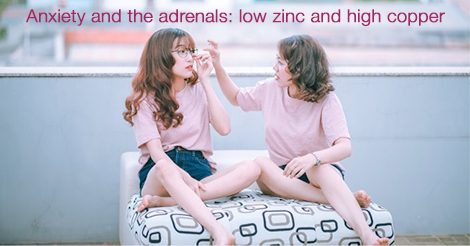 Anxiety, feelings of constant overwhelm and fatigue, plus insomnia, sugar cravings, the inability to control blood sugar, lack of mental clarity… these symptoms can be due to adrenal issues and this condition is brutally disruptive. And yes, you can suffer from all of the above at once!

I cover the Adrenals and Anxiety in my interview with Dr. Christianson and a few of the aspects we cover are low zinc and high copper.

Here is a snippet from me about zinc:

zinc is very underrated as being a nutrient that is commonly deficient and certainly when it comes to anxiety, it’s a huge factor. We have the zinc-copper imbalance and when we’ve got very high copper levels and low zinc levels, we may feel more anxious. But zinc is really, really important for so many things. I just mentioned serotonin, it’s really important as a cofactor for making serotonin and the other neurotransmitters like GABA which is a calming neurotransmitter.

It’s really, really important for adrenal function as well. There was actually a really nice paper that was published in December 2015 [Effects of Physical Activity on Trace Elements and Depression Related Biomarkers in Children and Adolescents], looking at children and adolescents and found that children and adolescents with lower levels of zinc also had low serotonin, they had high copper levels, and they also had lower cortisol levels, and sometimes, they had high cortisol levels. So, it varies but they definitely have issues with their cortisol levels and that’s obviously going to be a big factor when it comes to how they’re able to handle stress, what their mood levels are going to be like, what their cognitive function is going to be like, and everything else. So, zinc is a really important thing. It’s not talked about a lot and it’s something that is definitely a big factor.

I didn’t share this specific information during the interview but here are some of the results from the above study:

A little later in the interview Dr. Christianson shares what happened to him when he was inadvertently exposed to high levels of copper:

This is a brief insight I won’t go too far into but there was a period of time I was studying with a Vedic practitioner and there were these various rituals that I had to do. One of them was involving putting liquids in these containers and drinking and doing [some of these] meditations. The historical vessels [that] were used were copper-based and I got pretty toxic at one point. I had these horrible leg cramps. I really lost my capacity for exercise. It was very dramatic. I had a hard time climbing stairs and odd mood changes and odd twitches and what not. I finally realized that was the culprit and yeah, I did mega doses of zinc which I normally would not have tolerated well but I did fine with during that time and recovered from that. So, those are a real thing! (laughs) 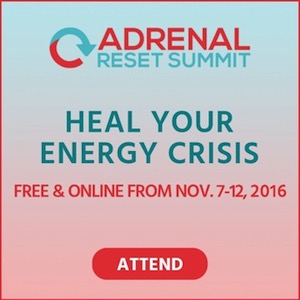 I hope you can join us for the summit! The line-up is excellent. Here are a few of the many excellent speakers and their topics:

You can register here https://uo178.isrefer.com/go/arsScott/trudyscottcn/