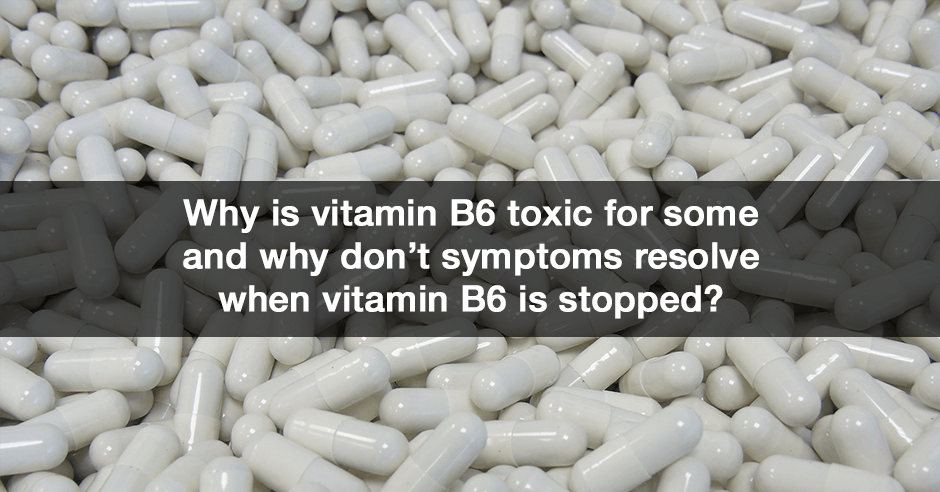 In a recent blog post, Vitamin B6 improves dream recall (which can be used to monitor vitamin B6 status), I promised to address concerns about the potential for vitamin B6 toxicity. I have yet to see any signs of toxicity in my clients, but I have also not ever recommended more than 500mg/day.

However, I was recently made aware (thanks to some folks in my community) that there are some individuals who have issues with very small amounts of vitamin B6.  As of this writing I don’t know why this occurs but I’m writing about it in the hope we can start to put some of the puzzle pieces together. If you have experienced any issues with using vitamin B6 supplements please do share in the comments.

I’d like to start with what we know from the research and from experts like Dr. Carl Pfeiffer – since B6 is water soluble, excesses are documented to be excreted via the urine so that toxic levels are never reached.

It is common knowledge that amounts of 50 mg or greater are considered therapeutic and a high dose, and you should reduce your dose if you notice any tingling in your fingers and other extremities. This could be a sign of too much vitamin B6 and is called peripheral neuropathy. Because vitamin B6 is water soluble, this condition is reported to be completely reversible if you stop supplementing with vitamin B6 or reduce your dose. In one case report, some patients were using up to 5000mg/day, and once they stopped the vitamin B6 their symptoms improved.

In his book Mental and Elemental Nutrients, published in 1975, Dr. Pfeiffer stated:

excesses are excreted via the urine so that toxic levels are never reached. Pyridoxic acid occurs in the urine of patients who take any excess of vitamin B6. This is a harmless excretion product.

He had some of his patients with pyroluria use 1000mg twice a day but recommended working with a practitioner if using amounts higher than 500mg. I agree with the latter.

You’ll see varied research papers on what is considered too high a dose. In this paper, How much vitamin B6 is toxic?, the authors report that 1000mg per day or more causes neuropathy. They also share that there

have also been occasional reports of toxicity at intakes of 100-300 mg per day [and that a report of] neurotoxicity in 2 patients who had taken 24 mg and 40 mg of vitamin B6 per day respectively, may be coincidence rather than a true toxic effect of such relatively low doses.

In the USA, per this article on the NIH site, the upper limit is set at 100mg/day. This is the rationale:

several reports show sensory neuropathy occurring at doses lower than 500 mg/day, studies in patients treated with vitamin B6 (average dose of 200 mg/day) for up to 5 years found no evidence of [neurological issues].

Based on limitations in the data on potential harms from long-term use, the FNB halved the dose used in these studies to establish a UL [upper limit] of 100 mg/day for adults. ULs are lower for children and adolescents based on body size.

As I mentioned above, I have yet to see any signs of toxicity in my clients, but I have also not ever recommended more than 500mg/day.

Psychosis that resolves when vitamin B6 is stopped

A colleague shared this about 2 patients developing psychosis as a result of using too much vitamin B6:

I have had 2 patients in the past 3 years who developed psychosis as a result of taking too much vitamin B6. I think it’s a fine line between what is enough for some people, and then what becomes too much. While some may be able to handle large doses of B6, we know that at higher doses it can cause severe problems for other people. It’s a nutrient I dose and monitor carefully for sure.

There is no research on acute psychosis and vitamin B6 toxicity but she shares this:

neuropathy and psychosis (or acute mental health symptoms) often co-occur, so to me it makes sense that a person could experience both together as a result of too much vitamin B6. In both the patients the acute psychotic symptoms resolved once they stopped taking high doses of B6. They were both taking pyridoxine HCL at doses above 500mg daily (one because of information she had read online, and the other because another practitioner had recommended it). My guess is there is some genetic factor and/or mediating factor biologically that makes some people susceptible to a negative response.

Serious issues that are not resolved when vitamin B6 is stopped

Clearly there are some individuals who do have serious issues that are not resolved when they stop taking vitamin B6. In the previous blog, Vitamin B6 improves dream recall (which can be used to monitor vitamin B6 status), Ruth shared this feedback about her experience with vitamin B6 toxicity:

Trudy, I appreciate your evidence-based approach to health issues, but I think you need to be aware that there are dangers in taking too much synthetic vitamin B6. B6 toxicity is not always reversible. Individuals vary in their response to B6, and while many do well on supplementation, others experience toxicity. I was diagnosed with pyroluria, but experienced serious toxicity.

Vitamin B6 toxicity is a very unrecognized but emerging epidemic that can cause widespread neurological damage to the body. It is not commonly recognized by most of the medical community and is often misdiagnosed. B6 toxicity can cause multiple different symptoms that can vary from person to person. Peripheral neuropathy or nerve damage to the feet, legs or hands is one of the most common symptoms of vitamin B6 toxicity. Tingling, shocks/zaps, vibrations, ataxia, burning, numbness of feet, calves and/or hands, and headaches are also commonly reported. Other symptoms are: ocular, sensory, skin, gastrointestinal and psychological.

I appreciate Ruth sharing this and am very concerned that this is happening. And yes, vitamin B6 is synthetic, but I am not yet convinced that this could be the only cause as there are other synthetic/man-made supplements (such as GABA) that don’t cause issues like this.

However, we do need to know why some folks have issues and why these issues continue even when the vitamin B6 supplementation is stopped.

Possible clues as to why vitamin B6 toxicity occurs?

If you have had issues that persist I’d ask these questions which may start to give us clues as to why this occurs:

It seems like this an emerging issue unless there is just now more awareness because of the web and more ability to share on forums, blogs and social media.

If we are to assume this is a new and emerging issue I would ask what has changed since the 1970s when Dr. Carl Pfeiffer used high doses (as I mentioned above, up to 1000mg twice a day) with no adverse effects?

These factors have wide-reaching adverse effects and may be triggering a toxic reaction in certain susceptible individuals:

Keep in mind that for most individuals, vitamin B6 causes no issues and is an important nutrient for improving the symptoms of pyroluria/social anxiety, reducing inflammation and oxidative stress, easing PMS and hormonal issues and much more. I share links to the research on the many benefits of supplemental vitamin B6 in this blog:  Vitamin B6 improves dream recall (which can be used to monitor vitamin B6 status).

That being said, we need to know why some individuals do have issues when using vitamin B6.

If you have been adversely affected and feel comfortable sharing answers to the following questions in the comments this may help us try and piece the puzzle together:

Is there anything else that you have discovered that you suspect may be a factor?

I plan to add to this list of questions as we get feedback and as I learn more.

To be clear, I’m not dismissing the fact that vitamin B6 toxicity is a real issue for certain individuals. I’m simply trying to figure out if there are some common factors that may be making symptoms worse in some individuals or setting someone up to be predisposed to symptoms or even preventing healing/recovery from toxicity.