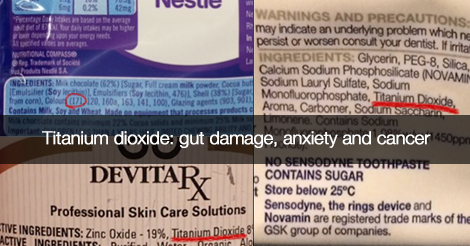 Titanium dioxide, a common food additive found in candy, gum, bread, sunscreens, cosmetics and medications, has been shown in new research to alter digestive cell structure and function due to the damage it causes to the gut lining:

The ability of small intestine cells to absorb nutrients and act as a barrier to pathogens is ‘significantly decreased’ after chronic exposure to nanoparticles of titanium dioxide, a common food additive found in everything from chewing gum to bread.

Acute exposures did not have much effect, but chronic exposure diminished the absorptive projections on the surface of intestinal cells called microvilli. With fewer microvilli, the intestinal barrier was weakened, metabolism slowed and some nutrients — iron, zinc, and fatty acids, specifically — were more difficult to absorb. Enzyme functions were negatively affected, while inflammation signals increased.

The study was done using an in vitro (i.e. “in glass” or test-tube) cell culture model of the small intestinal epithelium. You can read the actual January 2017 study here.

Since this was not a human study this could be some of the extrapolations we could possibly make because of how chronic exposure led to fewer microvilli:

As soon as I read this paper I thought of my good friend and colleague Mira Dessy, NE, known as The Ingredient Guru, and author of The Pantry Principle: how to read the label and understand what’s really in your food. She is an expert in all things ingredient and food labels related so I reached out to her and she shared that the titanium dioxide powder itself appears to be somewhat harmless (although there are reports of the dust causing causing respiratory irritation). Even this concerns me but it gets even more concerning. Mira goes on to say:

The challenge, however, is that there is an increasing amount of titanium dioxide nanoparticles being used.  The microscopic size and their ability to penetrate into the blood stream and from there circulate throughout the body is very worrisome.  These titanium dioxide nanoparticles represent a significant challenge to nerve tissue and also impact brain health through oxidative stress.

Given the ability of the nanoparticles to go through the skin and into the blood stream I’m not surprised that there is growing evidence for gut disruption in addition to the nerve and brain health issues.  The damage to epithelial cells and impairment of micronutrient absorption is highly concerning.

I love Mira’s book The Pantry Principle (and learned so much from it) and I asked her this week when I reached out for a quote from her why it didn’t make it into her book published just a few years ago in 2013. She shared that it did not really come up on her radar at the time:

Sadly it turns out that this is because food producers can use up to 1% titanium dioxide (food grade) without declaring it on the label.  Unfortunately when I wrote the book I did not know that.   At the time it appeared to be primarily used in personal care products. Approved for use in cosmetics back in 1973 it is often found in bath powders, cosmetics, antiperspirants, nail polish, sunscreen, and lotions.  It seems to be growing in food usage, appearing in candies, gums, dairy products, condiments, processed meats, and snack foods.

I’m sharing this because I want you to be aware how quickly things can change and how we really need to keep up with labeling! (be sure to check out Mira’s other work on additives and labeling and my review of her book The Pantry Principle for additional information.)

I was also shocked to find out that food producers can use up to 1% titanium dioxide (food grade) without declaring it on the label – what!? I suspect (and hope) this will be changing in the near future.

I would expect some radical changes from governments and companies using it especially with this IARC (International Agency for Research on Cancer) monograph (another resource Mira provided):

Titanium dioxide is possible carcinogenic to humans (Group 2B) based on sufficient evidence in experimental animals and inadequate evidence from epidemiological studies.

and this conclusion they reach:

Another recent study found that injected titanium dioxide nanoparticles increased anxiety in rats, increased inflammation and there was increased accumulation in the liver, lungs and brain:

I plan to avoid this additive. The best way you can avoid it too is to do the following:

I also reached out to my friend and colleague Lara Adler, Environmental Toxins Expert & Educator for her expert opinion:

The issue of nanoparticles in consumer products, whether it’s food, or personal care products like makeup or sunscreen can be confusing. The first issue is that there are no current labelling or disclosure requirements regarding nanoparticles, at least here in the US. Companies that are more keen to appeal to health-minded consumers will often disclose that they are not using nanoparticle sized ingredients, but there’s no legal requirement for anyone to do so, which means it’s totally possible for a product to contain nanoparticles of titanium dioxide and we won’t know. In the European Union, companies are required to disclose and fully label nano-ingredients.

When it comes to topical use in say, sunscreen, research is showing that non-nano titanium dioxide is unlikely to penetrate the skin and enter the body, and is therefore a low risk. The bigger health risk, for nano, or non-nano are products that are aerosolized, like the spray sunscreens as these products are easily inhaled. Most of the research into the negative health effects of titanium dioxide are inhalation studies.

Her feedback supports what Mira and I have discovered from the research: there’s a growing body of research that’s indicating potential negative health effects of nanoparticles, including their ability to migrate throughout the body. She shared these papers with me (both about nanoparticles in general):

But most shocking is this study Lara shared with me about maternal exposure to nanoparticles of titanium dioxide:

It caused the changes in the expression of genes associated with brain development, cell death, response to oxidative stress, and mitochondria in the brain during the perinatal period.

Changes of the expression of genes associated with neurotransmitters and psychiatric diseases were found.

Here are some examples of what you may see on labels: 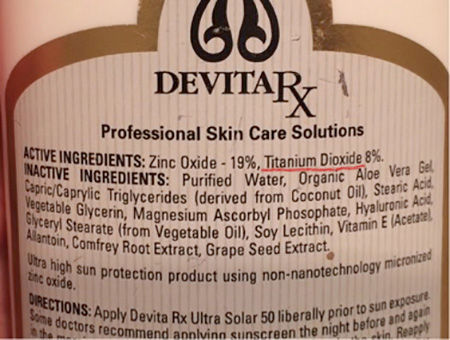 Titanium dioxide in Devitar sunscreen – this is the sunscreen I have been using and recommended by an integrative cancer doctor. This is a common ingredient in sunscreen since it reflects the sun. I’m on the look-out for a new sunscreen that is free from titanium dioxide because we just don’t know what research is going to find. Right now a product like this is better than some of the other sunscreens that contain endocrine-disrupting oxybenzone and should definitely be avoided at all costs. 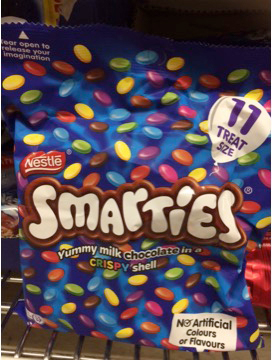 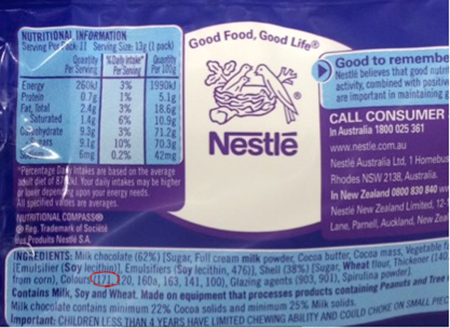 A bag of Smarties (yes, I was prowling the candy aisle here in Australia looking for ingredients!). You’ll see it on this label as 171. Titanium dioxide or E171 is used by the food industry to whiten and brighten food. Children have been identified as having the highest exposures because titanium dioxide content of sweets is higher than other food products. 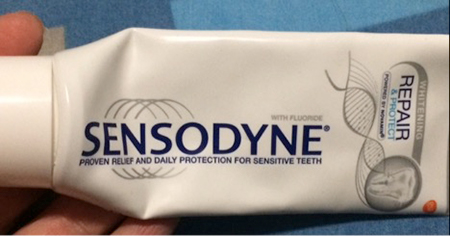 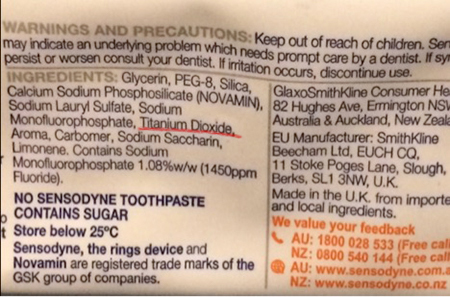 It’s very commonly found in toothpaste for it’s whitening and brightening properties. This is from a tube of Sensodyne toothpaste here in Australia.

Have you got products in your home with titanium dioxide on the label? I’d love to hear where you see it labelled and if you’ll be avoiding it in the future?