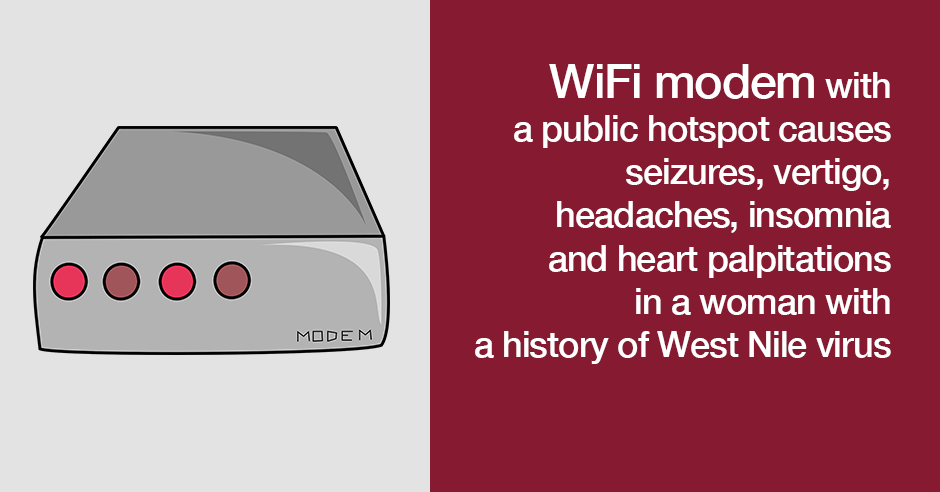 This recent research illustrates the harmful effects of a new type of wireless modem, enabled for both personal use and functioning as a public hotspot: Exacerbation of demyelinating syndrome after exposure to wireless modem with public hotspot. The public hotspot feature was designed to reach up to 100 meters (or 328 feet which is close to the length of a football field).

Here is the entire abstract since it explains the situation so well:

In August 2003, 48-year-old JS of Colorado, USA, a fitness therapist and sports nutritionist, contracted neuroinvasive [i.e infecting the nervous system] West Nile virus which left her with disabilities due to spinal axonal damage.

In August 2014, she suddenly developed symptoms very much like her acute West Nile infection 11 years ago, including focal seizures, ataxia, vertigo and headaches. Her blood count looked normal so there was no obvious infection. What struck her as odd was that when she left her apartment for any length of time, the symptoms stopped.

She found out that a new type of wireless modem, enabled for both personal use and functioning as a public hotspot designed to reach up to 100 m, had been installed in the flat under hers. Her neighbor replaced the modem with a router without the hotspot feature. After that, the seizures stopped immediately, and the other symptoms faded gradually, after which she was fine and again could sleep well.

Later, when another activated hotspot was installed in an adjacent flat, JS once again noticed symptoms.

A possible association between electrohypersensitivity, myelin integrity and exposure to low-intensity radiofrequency electromagnetic ﬁelds (RF-EMF) typical in the modern world has recently been proposed.

Since the West Nile virus attacks both the nerve cells and the glial ones, one explanation to the above observed case effects is that the initial virus attack and the wireless modem’s RF-EMF affect the nervous system through the very same, or similar, avenues, and maybe both via the oligodendrocytes [i.e. the myelinating cells of the central nervous system].

Here are a few of the other symptoms she reported before discovering that it was the public hotspot that was causing her symptoms:

These symptoms all dissipated when she wasn’t home. Once home in the evenings, her desire for sweets increased and her sleep was also impacted:

In the evening, her appetite was much increased and she craved sweet food, which was not usual for her. She became sleepy at the usual time, settling down between 10.30 pm and 11 pm and could fall asleep, all as normal.

However, within 1–2 hours, she routinely woke suddenly having had very vivid, disturbing dreams and with a pounding heartbeat. This was usually followed by a seizure, sometimes focal, where one part of her body (primarily right arm) would be shaking. Other times, her whole body was shaking.

She also noticed more severe symptoms when the modem with the activated public hotspot was closer to where she slept i.e. distance was a factor. On bad nights, after waking, she would sometimes go and sleep in her living room which was further away from the modem.

After a seizure, she slept fitfully, unless she moved to sleep on the couch in another room. There, JS found she could fall asleep quite quickly and sleep through the rest of the night.

When in her bedroom the modem was just 20–30 feet away and when in the living room it was about 50–60 feet from her (plus an additional wall), both of which weakened the signal.

It should also be noted that JS used a cell phone, a wireless router and a computer and had no problems from any of these – it was only the modem with the public hotspot that was problematic.The study authors shared that

The hotspot antenna almost certainly has a considerably higher transmit power as this would be needed to increase the effective transmit range for users in the area.

Other possible causes/mechanisms are reported as follows:

However, do keep in mind that for some people with electrohypersensitivity, simply using a cell phone and WiFi can cause symptoms.

Do you know if your router has this public Wi-Fi hotspot feature turned on?

Do you know if your router has this public Wi-Fi hotspot feature turned on? Many people do not and are fuming when they find out – I know I was!

JS discovered this as a result of a pop-upon her mobile phone:

From before the episodes occurred, JS kept her mobile phone WiFi disabled while at home. The day after she began having symptoms in August, she had temporarily enabled the WiFi feature while out shopping and when she came home that day, a pop-up appeared informing her she was in a free Xfinity WiFi zone.

In this article two Comcast customers sued the company for turning their Xfinity Internet routers into public WiFi hotspots saying “Comcast’s actions pose risks to subscribers and are taken without seeking their authorization.” They objected to the increase in customers’ electricity costs, the impacts on network performance and network security concerns.

However, they don’t even raise the issue of potential harm from a public WiFi hotspot that is activated on a modem in your home or one nearby.

In fact this site that offers instructions for disabling this public WiFi hotspot on your Comcast Xfinity router states that “We don’t necessarily think you have to disable this feature, as it seems to work fine — we haven’t heard any horror stories or reports of problems yet.”

I would consider this case study to be a horror story that is not common knowledge and needs to be. JS was seriously harmed on two occasions by modems with public WiFi hotspots. In both instances the home-owners with these modems were not even aware they had these public hotspots activated and very quickly had them disabled once they found out what was happening to JS.

The study authors conclude that this case study strongly indicates that:

emissions from these new wireless modems could cause physical harm for those susceptible to that type of radiation.

My questions are this:

I consider JS to be the canary in the coal-mine and her story is a good lesson for all us to wake up and get serious about WiFi and EMFs.

Here are some other blogs posts I’ve written about WiFi and EMFs:

Do share what you’ve experienced with modems that have public WiFi hotspots activated and if you can relate to any of the symptoms JS experienced?