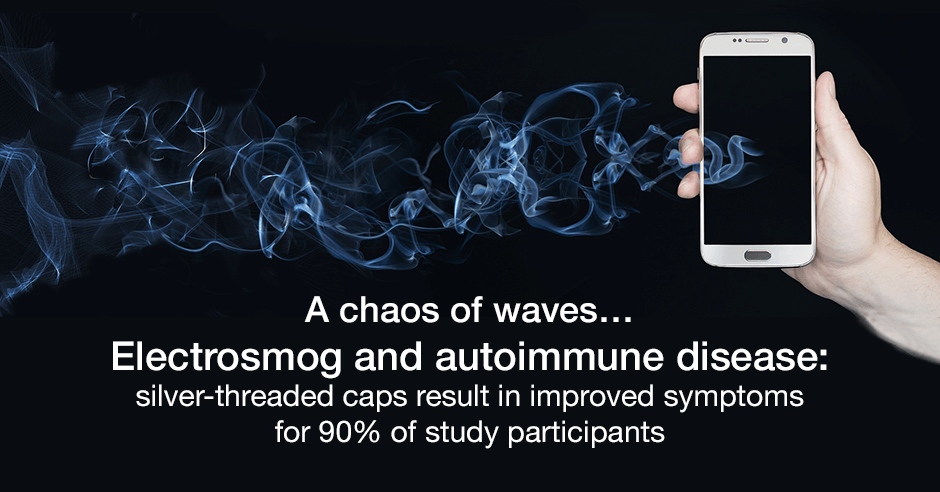 One of the most compelling studies I learned about in the recent Electrosmog Rx course (hosted by Nick Pineault) is the study by Trevor Marshall, MD and Trudy Heil, RN: Electrosmog and autoimmune disease. In this study, 90% of the participants – all with an autoimmune diagnosis of either arthritis, lupus, multiple sclerosis, sjogrens or celiac disease – reported improved symptoms as a result of wearing silver-threaded EMF protective caps.

The paper provides a good overview from NASA on what electrosmog is i.e. all the electromagnetic waves we’re exposed to on a daily basis:

As you sit watching TV, not only are there visible light waves from the TV striking your eyes, but also radio waves, transmitting from a nearby station, and microwaves carrying cellphone calls and text messages, and waves from your neighbor’s WiFi, and GPS units in the cars driving by. There is a chaos of waves from all across the spectrum passing through your room right now.

Patients who were participating in Dr. Marshall’s autoimmune/VDR/electrosmog research were purchasing commercially available shielded clothing and tenting on their own from retailers and reporting symptom improvements:

This clothing typically has silver-coated polyester threads interwoven with the supporting fabric so that the garment is capable of partially blocking microwave Electrosmog.

Because there were frequent anecdotal reports of symptom improvement, especially when their brain and brain stem were “shielded” during sleep, Dr. Marshall and his team decided to create a standardized sleeping cap so the EMF shielding effect could be easily analyzed and optimized.

The authors share that those with an autoimmune condition seem to be predisposed to Electrosmog hypersensitivity (now being called EHS) at levels currently existing in typical home and work environments. They suggest the following:

Caution does need to be exercised as some people can feel worse when going from being bombarded by EMFs on a daily basis to much less exposure. This could almost be considered a Herxheimer reaction and is described in the paper as follows:

When the Electrosmog in a patient’s environment is reduced, the immune system tends to become more active. This may result in immunopathology. Indeed, some patients have reported a surge in disease symptoms, occasionally an intolerable surge, after WiFi routers and cell phones have been switched off in their homes. Others have reported that travel to a very quiet area, such as a remote canyon, caused a surge in their immune symptoms.

This is something that Dr. Klinghardt finds when working with his patients and the authors agree that we need a plan on how best to address this. I can attest to this personally – I have discovered that I have Electrosmog hypersensitivity – and as I have started to mitigate my own EMF exposure I’ve had to be careful.

I’ll be sharing more about my journey and my detailed proposed go-slow EMF mitigation plan with links to research in a future blog.

Going back to the study – we are still learning more about what this may all mean for someone with an autoimmune disease. The results are clearly very powerful and the benefits wonderful. But for me this study is so promising on many other levels because it shows that:

I write about how Wi-Fi is an important threat to human health and may contribute to unresolved anxiety, SIBO, oxalate issues and high cortisol. This is just the tip of the iceberg and it’s something we all need to be taking seriously.

I’d love to hear from you. How concerned are you about EMFs and what changes have you made? Did you experience a Herxheimer reaction when reducing EMF exposure and what helped you?

If you’re a practitioner – are you talking to your clients/patients about this and seeing improvements in their symptoms when they make changes? Are you interested in learning more about this topic so you can further help them? If yes, the evergreen digital version of the Electrosmog Rx program created by investigative health journalist Nicolas Pineault is now available.  You can learn more about the program here. I highly recommend it!

His book, “The Non-Tinfoil Guide to EMFs” (my Amazon link), is also recommended reading for all of us.