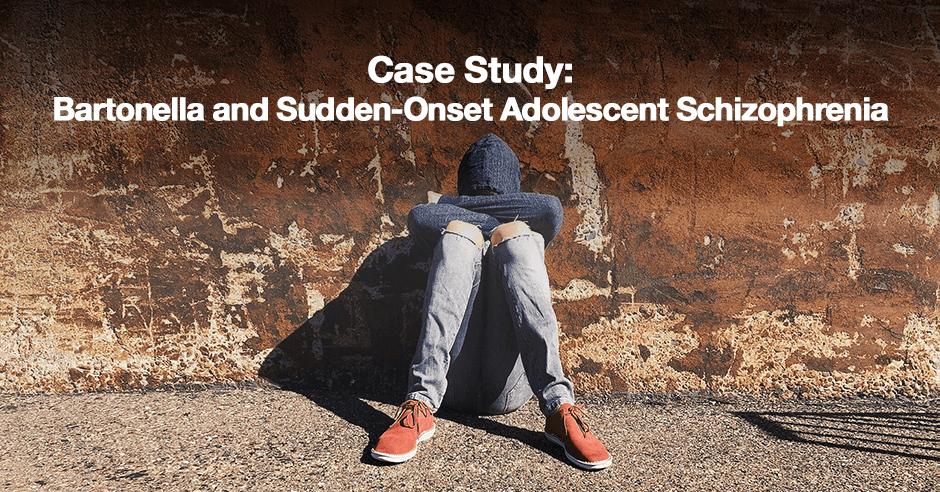 According to a press release from North Carolina State University, researchers share a case study describing an adolescent human patient diagnosed with rapid onset schizophrenia who was found instead to have a Bartonella henselae infection. This study adds to the growing body of evidence that Bartonella infection can mimic a host of chronic illnesses, including mental illness, and could open up new avenues of research into bacterial or microbial causes of mental disorders.

Bartonella is a bacteria most commonly associated with cat scratch disease, which until recently was thought to be a short-lived (or self-limiting) infection. There are at least 30 different known species of Bartonella, and 13 of those have been found to infect human beings. The ability to find and diagnose Bartonella infection in animals and humans – it is notorious for “hiding” in the linings of blood vessels – has led to its identification in patients with a host of chronic illnesses ranging from migraines to seizures to rheumatoid illnesses that the medical community previously hadn’t been able to attribute to a specific cause.

In the case study published in the Journal of Central Nervous Disease, an adolescent with sudden onset psychotic behavior – diagnosed as schizophrenia – was seen and treated by numerous specialists and therapists over an 18-month period. All conventional treatments for both psychosis and autoimmune disorders failed. Finally, a physician recognized lesions on the patient’s skin that are often associated with Bartonella, and the patient tested positive for the infection. Combination antimicrobial chemotherapy led to full recovery.

According to the case report above, Bartonella henselae Bloodstream Infection in a Boy With Pediatric Acute-Onset Neuropsychiatric Syndrome, these are some of the many symptoms he experienced over the 18-month period:

I suspect some of his later symptoms were related to side-effects from many of the medications he was prescribed over the course of his treatment. Some symptoms may also be attributed to withdrawal from some of these medications. One example mentioned in the case study was “abrupt withdrawal of clozapine and tramadol” where “he experienced severe anorexia, nausea, and vomiting, which resulted in hospitalization and a 20.5-kg weight loss over 40 days.” It’s well- documented that withdrawal signs and symptoms of antipsychotic medications such as clozapine “may include insomnia, nausea, vomiting, anxiety, and agitation.”

The skin lesions or “stretch mark-like” lesions on his thigh (A) and armpit (B) are tell-tale signs of a Bartonella bacterial infection or neurobartonellosis. Here are photographs taken by his parents.

A successful outcome for this young boy came about as a result of antimicrobial treatment in the way of antibiotics and antifungals. His skin lesions healed, his psychosis and other symptoms resolved, he was able to quit his psychiatric medications and go back to being a typical young boy. How wonderful for this young boy!  And this gives me so much hope for others who may be in a similar situation and looking for solutions.

Other than the hope I felt, these are my other thoughts that came to my mind as I read this case study:

We already know there is a huge psychiatric connection with Lyme disease and co-infections: anxiety, depression, panic attacks, and OCD too. This case adds to the evidence. Even though neuropsychiatric Lyme disease is well-recognized in the world of functional medicine, keep in mind that Lyme disease bacteria such as Borrelia and co-infections such as Bartonella are only one of many possible trigger/root cause of symptoms like this young boy experienced.

Other infectious causes of psychiatric conditions include chronic strep (in the case of PANDAS/PANS) and toxoplasma gondii.

Other physiological root causes of psychiatric conditions like schizophrenia, anxiety, bipolar disorder and depression could include a thyroid condition, heavy metal toxicity from say lead or mercury, mycotoxins, and even gluten.

We need to be shouting case studies like this from the rooftops so more doctors, more psychologists, more functional medicine practitioners, and more parents are aware and start to look for infectious/physiological/biological/nutritional/environmental root causes.

We appreciate those involved in publishing this case and the family for giving permission.  Hopefully, case studies like these will drive future research and treatment approaches.

What do you think and what came to your mind when you read this case study?