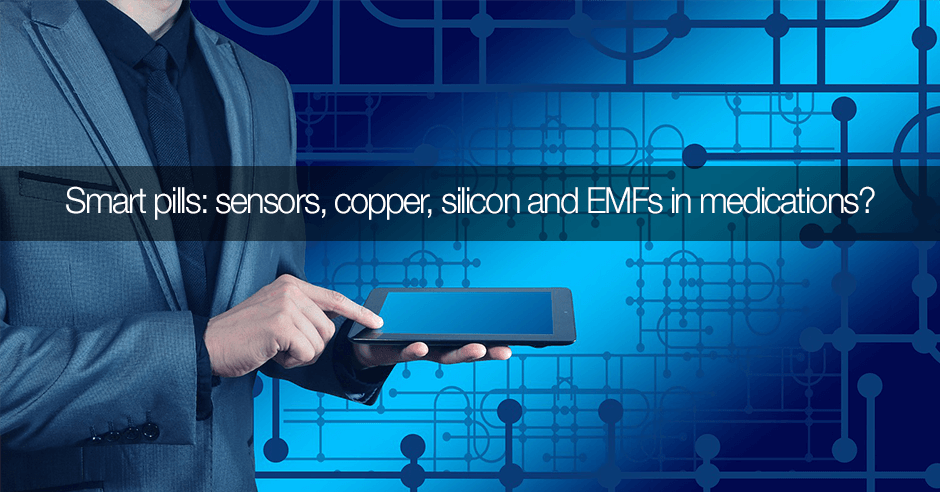 Can you discuss the new copper and silicon microchip they are starting to use in Abilify and other bipolar and schizophrenia medications? This subject has been in the news.

The above question was posted on a recent blog – Copper toxicity: anxiety, phobias, ADHD on the Heavy Metals Summit

This was new to me and at first glance I didn’t like the sound of copper and a microchip in a medication, so I went looking for information.

Before I share my findings, here is a quick overview of Abilify/Aripiprazole and the FDA-Approved and Off-Label Uses: originally approved for schizophrenia and then approved for bipolar disorder, approved ‘as adjunctive treatment for major depressive disorder’ and also approved for irritability in autism spectrum disorders.

Dr. Mark Hyman actually mentions off-label use of antipsychotics like Abilify in the Broken Brain docuseries. He discusses their use in children:

there’s pushing of medications for off-label use, which means that they’re not approved for those indications. They’re doing this for kids with antipsychotics, and they’re actually being sued. The pharma companies have been held liable for promoting these drugs for off-label uses for kids, which they’re not allowed to do. They get fined billions of dollars, but they don’t care because they’ve made umpteen more billions, and they just see it as a marketing expense.

What are these ‘smart pills’?

Chicago’s Rush University Medical Center has become one of the few health care providers in the United States to use a grain-of-sand-sized sensor that, after being swallowed, can alert patients when they’ve forgotten to take medication.

Developed by Proteus Digital Health, the FDA-approved sensor is made from microscopic quantities of copper and magnesium. Powered by the human body (no batteries or antennas required), the tiny sensor turns on after reaching patients’ stomachs, where it begins sending signals to a Band-Aid-like, Bluetooth-enabled patch worn on the torso. The patch then decodes those signals into meaningful health information and sends it to users and physicians in an app.

Here is the press release about these ‘smart pills’- Otsuka and Proteus® Announce the First U.S. FDA Approval of a Digital Medicine System: Abilify MyCite® (aripiprazole tablets with sensor)

This was approved by the FDA for use in U.S. in 2012. The microchip is actually made of copper, magnesium and silicon, and reacts with stomach juices when swallowed along with the medication. According to the above article:

Once the microchip has done its job, it dissolves and passes out of the body along with other digested food.

However, another article on the introduction of these smart pills into the UK doesn’t seem to reach the same conclusion:

What’s not clear is how long the microchip operates inside the body, and what happens to it once it dies. Is it digested, or is it flushed out into the sewer system wholly intact? And if it’s flushed, what happens to all those millions of chips that wind up in sewage treatment facilities?

Some of my concerns

I have no idea what the long-term implications of this ‘smart pill’ technology will be and would hope patients are being informed now, will be informed in the future, and will have a choice as to whether or not they want to use ‘smart’ medications like this.

Without going into the myriad of issues with off-label use of atypical antipsychotics and all the functional medicine and nutritional approaches that can be used to address anxiety (such as tryptophan), social phobia (such as low zinc and low vitamin B6), ADHD (such as gardening or low iron), OCD (such as a gluten-free diet or inositol), insomnia (such as GABA and 5-HTP) and PTSD, we now have the added concerns of what problems these ‘smart pills’ may contribute to.

I say let’s be smart about this and rethink these ‘smart pills’ and ideally look for functional medicine and nutritional solutions instead of using antipsychotics off-label.

And even if we look at some of the approved uses of antipsychotic medications, case studies report a nutritional psychiatry approach for this. Dr. Georgia Ede, MD, shares two schizoaffective cases in her article: Low-Carbohydrate Diet Superior to Antipsychotic Medications. These were patients of Dr. Chris Palmer, a psychiatrist from Harvard’s McLean Hospital in Belmont, Massachusetts. They both tried a ketogenic diet for weight loss. Here are the results the woman patient experienced:

After four weeks on the diet, her delusions had resolved and she’d lost ten pounds. At four months’ time, she’d lost 30 pounds and her score on a clinical questionnaire called the PANSS (Positive and Negative Symptom Scale), which ranks symptoms on a scale from 30 (best) to 210 (worst), had come down from 107 to 70.

The male patient experienced similar results with “dramatic” reductions in auditory hallucinations and delusions, as well as better mood and energy. He also lost weight, losing 104 pounds over the course of a year.  As Dr. Ede writes:

These outcomes are truly remarkable: improvement by dozens of points on the PANSS, significant weight loss, and better quality of life. There simply is no psychiatric medication available with the power to accomplish those results.

And in this instance and others like them we won’t have the ‘smart pill’ issues.

Have you ever been prescribed Abilify or one of the other antipsychotics? And for what symptoms?

Has your doctor ever offered you the ‘smart pill’ option?

Have you worked with clients or patients who have been prescribed these medications?