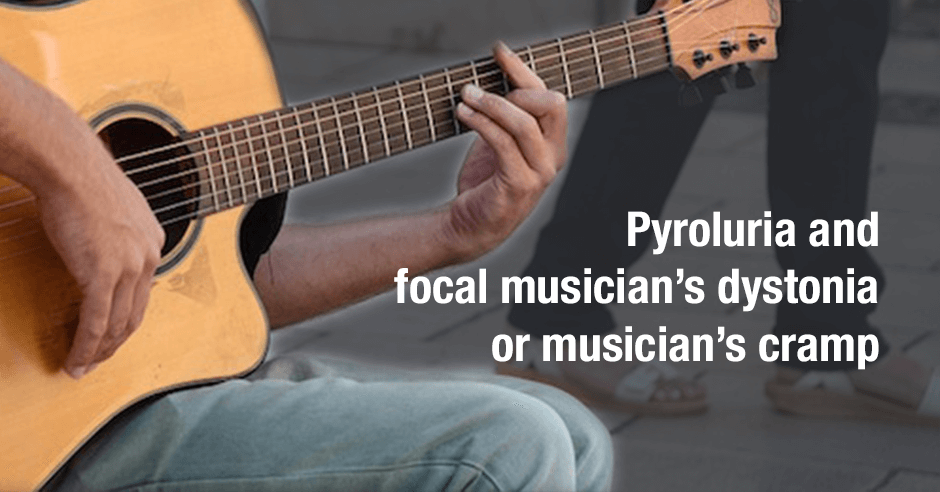 In May 2014 a gentleman named Jay asked this question on my Pyroluria Questionnaire blog: “have you come across a connection between pyroluria and focal musician’s dystonia (musician’s cramp)?

I responded saying “I have not and until I looked it up I was not aware of this condition. I’m curious why you’re asking? Do you or someone you know have symptoms of pyroluria and focal musician’s dystonia?”

I’m a very curious person and always turn to the research and like to look for connections. I started to dig and came across the The Dystonia Society, a UK based organization that provides support, advocacy and information for anyone affected by the neurological movement condition known as dystonia. They have this definition on the About Dystonia page:

Dystonia is a neurological movement disorder. Faulty signals from the brain cause muscles to spasm and pull on the body incorrectly. This forces the body into twisting, repetitive movements or abnormal postures.

The various types of dystonia are listed and they discuss managing symptoms and say:

Remission from symptoms does sometimes occur but is rare – occurring in around 5-10% of cases.

I posted some feedback, starting a dialogue (both in the comments and via email) that led to me learning a whole lot more about dystonia and the finding out there does seem to be a connection to pyroluria, a social anxiety condition that is not well-recognized in the medical or mental health community. Symptoms include inner tension and discomfort in big groups. Many introverts relate to the symptoms of pyroluria too.

In the process Jay saw wonderful results, we heard from Dave and his success. And we’re getting to share this information in the hope of helping others like him and Dave.

Much of the information is buried in comments on various blogs so I’ve decided it needs a separate blog post – with the connections and research I discovered and some of the inspiring feedback from Jay and Dave.

This is most of what I originally posted (with a few slight revisions).

I do see some overlaps with dystonia and mood so it’s possible there is a connection between pyroluria and musician’s dystonia:

(1) The Dystonia Society is a wealth of information and has this on their mental health page: “it is now thought that people affected by dystonia are more likely to experience mental health conditions such as depression, anxiety and OCD even before the physical symptoms of dystonia appear. It is not known why this is – but it appears that whatever causes dystonia may also affect mood and behaviour in some way.”  Now I wonder how common social anxiety is for those with dystonia?

(2) “An additional relation between dystonia and mental health conditions is that some drugs used to treat psychoses can cause tardive dystonia / dyskinesia. With the new generation of these drugs (called dopamine receptor blockers) this is much less likely than it used to be – but unfortunately a small risk remains.” (this is also from the above dystonia page)

(3) The drug treatments they recommend are also often used for anxiety and depression. I’d suggest assessing for low GABA, low serotonin and low catecholamines first (using the amino acid questionnaire and determining if targeted individual amino acids may give the same relief. I would avoid benzodiazapines – Dr. Catherine Pittman shared the many side-effects and withdrawal effects during the Anxiety Summit.

(4) If you have pyroluria, you’ll also have low levels of zinc and vitamin B6, key co-factors in making serotonin and GABA and other neurotransmitters which affect anxiety and depression.

(5) Depression, anxiety, pyroluria and dystonia have a possible autoimmune/gluten/diet connection. This paper “Movement disorders in autoimmune diseases” discusses how “Tremors, dystonia, chorea, ballism, myoclonus, parkinsonism, and ataxia may be the initial and even the only presentation of these autoimmune diseases.” And here is a case study where the dystonia resolved on a gluten-free diet: “She had complete resolution of her neurological symptoms with introduction of a gluten-free diet.” We know gluten can damage the gut and lead to low levels of nutrients such as zinc and also cause low serotonin.

(6) Wilson’s disease (a serious condition of high copper/low zinc) can have symptoms of dystonia. This 2012 paper states: “The clinical manifestations of neurologic Wilson’s disease include variable combinations of dysarthria, dystonia, tremor, parkinsonism, ataxia, and choreoathetosis.”

I’m so pleased Jay asked this question. I learned a lot by looking in to this initially and since then have learned a great deal more.

And take a look at the fabulous results Jay and Dave saw when they implemented only the pyroluria protocol (the starting dose I use with clients is 100mg vitamin B6 and 30mg zinc and 1300mg Evening Primrose Oil):

I started taking B6 (Pyridoxine Hydrochloride) 120mg and Zinc USP 60mg 2 weeks ago and do find some relief already. As you may have guessed, I have had dystonia for a long time and had to put a professional musician’s career on hold, and when I read your site, I found that I have a large number of symptoms from your list – I am hopeful.

I think it is, at this point, safe to say that the pyroluria treatment is, at least in my case, the cure for pyroluria and dystonia. 90%+ of my symptoms have disappeared, I am working extensively on repertoire and I am thinking about getting back into performing.

just writing here to say that i too have battled focal dystonia over the past 8+ years.  actually started as writer’s cramp and then worked it’s way into my guitar playing.  about  3 years ago i noticed symptoms lessened based on different things i ate and shortly after came across pyroluria.  in all questionairs i answer yes to most if not all questions.

anyway,  for the past 2 years i’ve been on zinc and b6 and have had vast improvements.  for me, the muscle disorders don’t go away without retraining, but the b6 and especially zinc make retraining much more successful.   however, sometimes i do hit the jackpot and my hands work almost normal without the efforts of retraining.  my dose fluctuates between 25-60 mg zinc and 50-100 mg b6 which i seem to have more trouble taking.  i also experimented with methyl b12 but that led to a very painful rash.

the funny thing about all of this is that i feel nowadays that focal dystonia was only the canary in the coal mine for other symptoms that paid little or no attention to because i was only focused on being a musician.  as a result of taking supplements most of those other symptoms are much better and i’m soooooo close now to having proper movement in my fingers.

it’s really great to see what you and jay have posted here because it really validates what i’ve been doing.  i too believe there are many that can be helped by this.

I am so happy to read this dystonia related success story! After my own experience, I still say an experience akin to rebirth as a musician and also as a person, this was the reason for me to post on this blog – to help get this out to musicians who are victims of dystonia and inadequate medical treatment.

We’re hoping we can generate some interest from various dystonia organizations/groups/forums and help more musicians find symptom resolution – certainly more than the 5-10% the Dystonia Society reports. The more people reporting success, the more likely approaches like this will be studied, accepted by the mainstream medical community and included on sites like the Dystonia Society.

If you relate to any of this please do comment and let us know what your results have been.

If you know someone with musician’s dystonia (or another form of dystonia) and pyroluria/social anxiety please do share this with them.