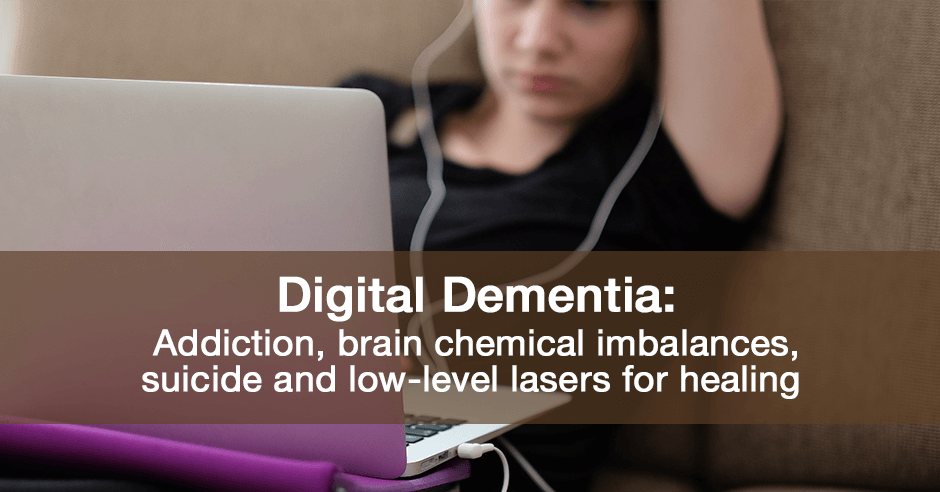 “Digital dementia” is very real – overconsumption of screen time can lead to a breakdown of cognitive abilities and deteriorated posture, developmental delays, degraded short-term memory, seclusion and lack of motivation… especially for our children!

In my interview, Food and Mood Support to Prevent Digital Dementia, I talk about anxiety, depression and even a higher risk for suicide in overuse of screen time and how using diet and amino acids can help with the addiction and related mood issues.

One of the questions Krista asks is this: “What do you think will happen to children/teens if we don’t make changes as a society?” and I share some scary stats about suicide.

In a 2018 article in Newsweek, “iPhones Pose Suicide Risk to Teenagers, Apple Investors Warn”, they share

A 2017 study by Jean Twenge, a professor of psychology at San Diego State University, who found that U.S. teenagers who spend more than three hours a day using electronic devices are 35 percent more likely to have a risk factor for suicide than those who spend less than an hour.

Teenagers who spend more than five hours on their phones are 71 percent more likely to have a risk factor for suicide.

And these are very real and sobering stats about the average American teenager – they first receive a smartphone at the age of 10 and spend over 4.5 hours a day using it!

Of course, we have to consider how much is it the biological effects of the smartphone itself (DNA damage, immune system effects, depletion of zinc and melatonin etc.) and how much is it the poor nutrient status and brain chemical imbalances that are driving this high use of smartphones (i.e. a need to self-medicate by going online) and the increased anxiety, depression and suicide risk?

It’s likely a combination of both…and a vicious cycle that can be broken with education AND addressing brain chemical imbalances. Low GABA, low serotonin, low dopamine and even low endorphins drive teens (and us adults too) to “self-medicate” with social media and iPhone use in order to feel calm, happier, stimulated and/or comforted.

We do this just like we do with sugar, street drugs, prescription pain meds, and alcohol. Just like with drugs and carbs, we can break this very serious digital addiction with individual amino acids such as GABA, tryptophan, DPA and tyrosine, and prevent digital dementia AND improve the mood and reduce the anxiety of those experiencing this. It’s imperative we use this approach in addition to dietary changes, parenting tips and education about this harm we’re doing to ourselves.

The good news is, that in addition to improving diet and nutrient status, we can also use tools to help with healing.

Learn all this and more on The Digital Dementia Summit

Host, Dr. Krista Burns, is an author and speaker who has been educating practitioners about the dangers of digital dementia for over 5 years. With this summit she believes it’s now time to reach parents directly for their health and that of their children.