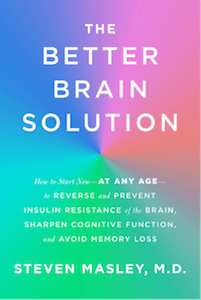 My friend and colleague, Dr. Steven Masley, has developed a groundbreaking book and wellness program, The Better Brain Solution (my Amazon affiliate link) with a release date of January 2, 2018.

The Better Brain Solution is based on what he sees in his clinic and is supported by research published by Dr. Masley and his colleagues: Lifestyle Markers Predict Cognitive Function

Published data from his clinic shows that we can improve executive function and brain processing speed by 25-30%, with the 5-step plan he developed, focused on adding the right foods, nutrients, activity, stress management, and toxin avoidance. As insulin resistance is the primary cause for cognitive decline and losing brain processing speed, he believes this approach can help prevent at least 60% of dementia and Alzheimer’s disease.

Recent studies have shown that partial intermittent fasting can be as effective—and sometimes more effective—in improving cognitive per­formance than traditional fasting; plus it also improves blood sugar con­trol. Avoiding calories (especially carbohydrates) for at least fifteen to eighteen hours will initiate ketone formation and shift fuel usage from glucose (sugar) to ketones (a molecular by-product of fat-burning). The brain’s energy-producing factory, the mitochondria, then uses those ketones for fuel. Simply put, in ketosis, cells convert fat rather than sugar into energy, and the brain seems to like that.

And he reviews these partial intermittent fasting options, recommending #1 as the easiest one to follow for most:

The MCT oil and coconut oil discussion is a valuable one but if caffeine is an anxiety trigger for you, simply skip the coffee and MCT oil/cream recommendation. He has a section for ApoE4 genotypes and it’s worth mentioning this here as it has come up on previous blog posts. Dr. Masley’s advice:

Keep to a modest intake of saturated fat from animal protein and dairy products. Because ApoE4 genotypes are less able to utilize MCT fats effectively as fuel, you have less reason to use MCT oil, coconut oil, and other coconut products.

There is an entire chapter on valuable nutrients. Here is a snippet on curcumin from the book – showing both cognitive and mood benefits:

Beyond its anti-inflammatory, arthritis-relieving, antioxidant, and cancer-fighting properties, curcumin has been studied for its effects on cognitive decline. The challenge is that original forms were poorly absorbed, while larger doses (which might be the most effective for addressing cognitive decline) have caused significant gastrointestinal symptoms.

Recently, improved curcumin formulations have been introduced, with much better rates of absorption and gastrointestinal tolerability. One study that used these newer forms of curcumin has shown improved cognitive function. Dr. Katherine Cox and her Australian research team evaluated 60 healthy adults (without memory loss), age sixty to eighty-five. Subjects were randomized to receive 400 mg of a well-absorbed curcumin formulation and a placebo, and sophisticated measures were used to assess their cognitive function pre-and post-therapy. Even after only three hours, researchers noted improved cognitive function with curcumin, but none in the control group. After four weeks, those receiving curcumin showed better cognition, plus subjects reported more energy and less anxiety.

Additional studies in humans have shown that giving curcumin decreased blood levels of beta-amyloid (the brain protein associated with Alzheimer’s disease); and in mice, giving curcumin enhanced hip­pocampal neurogenesis (regeneration of brain cells), helping to increase the size of the brain’s memory center.

In particular, its anti-inflammatory and antioxidant activity shows promise for high-risk individuals with ApoE4 genotypes, but that is yet to be proven. For now, I’m going to keep taking cur­cumin for my joints, with the hope it will protect my brain as well.

In the chapter on toxins and brain health, Dr. Masley discusses inorganic copper:

Only recently has copper emerged as a risk factor for Alzheimer’s, and the data are startling. In animal studies, giving mice inorganic cop­per supplements (also called copper-2 or divalent copper), compared to giving a placebo, caused increased beta-amyloid production in the brain, plus an elevated rate of Alzheimer’s disease. If you recall, beta-amyloid is the sticky protein that overaccumulates in the brains of those with Alzheimer’s disease.

Keep in mind that for some individuals, even organic copper can be an issue when it comes to anxiety (this is not discussed but is my contribution to the discussion).

And some additional comments from me: if you’ve been following me for some time, you know I support the mental health research showing that grass-fed red meat is beneficial to consume more than only once a week. I also say no to tuna and sword-fish especially if you suspect mercury issues are a factor in your anxiety or cognitive issues. I would also like to point out that benzodiazepines are not mentioned despite the research showing the role it may be playing.

I truly value the work of Dr. Masley and this book is wonderful for improving cognitive function (and even depression). I also really like the perspective he brings as a heart doctor and chef, the research that is woven in to the book and his advice, as well as the fun factor he teaches, like learning a new language!

In advance of the release of his book he is offering the following:

If you’d just prefer a copy of the book you can also pre-order here: The Better Brain Solution – How to Reverse and Prevent Insulin Resistance of the Brain, Sharpen Cognitive Function, and Avoid Memory Loss (my Amazon affiliate link)

Dr. Steven Masley created The Healthy Heart Summit to address the great deal of misinformation that exists on lifestyle and heart disease – far too many myths are still believed.

Heart disease is the #1 cause of death for men and women. Yet, it is often addressed with stents and bypass surgeries that only treat the symptoms, not the causes. It’s time to dispel the myths and misinformation about the causes of heart disease, and learn how to give you and your family a long, healthy life together.

Here are some snippets from Dr. Masley’s interview with Jonny Bowden, known as The Nutritional Myth Buster, and author of The Great Cholesterol Myth 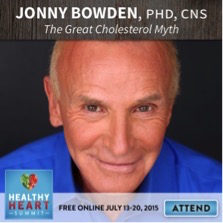 So yes, stress and anxiety play a big role in heart disease and this is the topic of my interview: Anxiety/Stress, Depression and Heart Disease

Tune in to hear Jonny Bowden, my anxiety interview and these speakers (and many more):

Register at the following link for the Healthy Heart Summit:
https://ez233.isrefer.com/go/summitreg/trudyscottcn/

Dr. Masley is celebrating the  release of his new book, “The 30-Day Heart Tune-Up, a Breakthrough Plan to Tune Up Your Heart, Energy, Waistline, and Sex Life.”

I received an advance copy and it’s great! I’ve been a fan for awhile! Who couldn’t love a doctor who is also a nutritionist and chef and shares videos of him doing wonderful cooking demos! I first heard Dr. Masley present on “The Sexy Younger You Summit” and then I had the pleasure of meeting him recently at the Mindshare Summit in Florida.

Dr. Masley is a board- and fellow-certified physician and nutritionist, author, speaker, and award-winning patient educator with over twenty-five years of research and clinical experience. He was recently named a Fellow by the American Heart Association.

And now I have brought him and his passion to you via an interview we just did. We discussed so much and he shared so many gems. Here are some of the highlights:

The wonderful thing is that by following these guidelines, your heart will be healthy and you’ll likely feel less anxious! If you are super-sensitive to caffeine, like me and many of my clients, then just use common sense when it comes to Dr. Masley’s suggestions for dark chocolate, coffee and green tea. We did talk about this during the interview.

I really wanted to interview Dr. Masley because heart disease is the number 1 killer of women, and is more deadly than all forms of cancer combined; and because of the link between anxiety and risk of heart disease: a recent study found that people in the highest third of anxiety symptoms had a 33 percent higher stroke risk than those with the lowest levels.

You can listen to my 30-Day Heart Tune-Up interview with Dr. Masley here.

I signed up and it’s great information. Great gumbo recipe and super seeing him in the kitchen surrounded by all the delicious ingredients!

Of course, be sure to get a copy of his new book “The 30-Day Heart Tune-Up, a Breakthrough Plan to Tune Up Your Heart, Energy, Waistline, and Sex Life.”