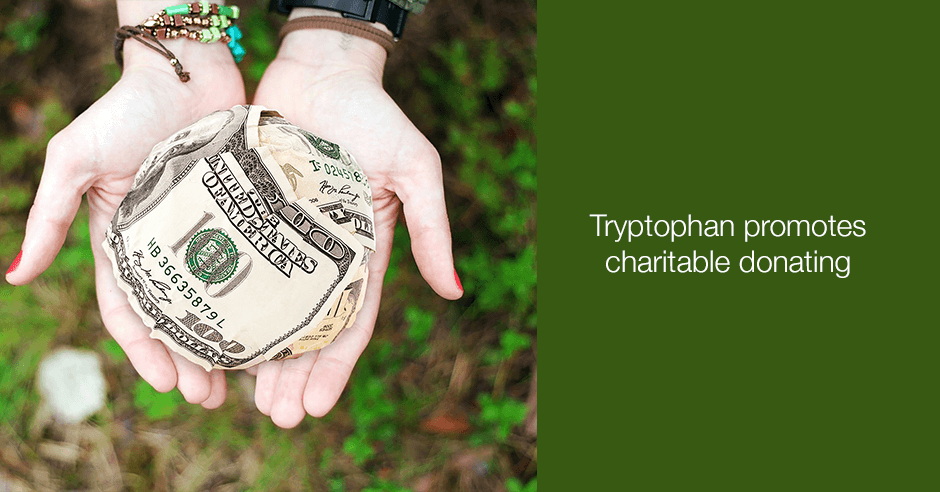 This 2014 study is one of my all-time favorite applications of tryptophan, an amino acid I use extensively with anxious clients. The goal of the study, Tryptophan promotes charitable donating, was to investigate the link between serotonin and charitable giving, something the authors consider to be “one of the most important elements of prosocial behavior.” They offer this quote by Molière:

Every good act is charity. A man’s true wealth hereafter is the good that he does in this world to his fellow.

In this study they tested whether charitable donating or giving can be promoted with the use of the amino acid tryptophan, the biochemical precursor of serotonin:

Participants were compared with respect to the amount of money they donated when given the opportunity to make a charitable donation.

Additional information about the study

Here is some additional information about the study, where the study group was given 800mg of tryptophan:

Sixteen participants (2 male, 14 female) were exposed to an oral dose (powder) of 0.8 grams [which is 800mg] of tryptophan – which roughly corresponds to the amount of TRP contained in 3 eggs–and 16 (2 male, 14 female) to 0.8 grams of microcrystalline cellulose, a neutral placebo. These doses were always dissolved in 200 ml of orange juice.

The donating task was standardized, without the presence of an experimenter, and with a fixed amount of money in a fixed number of notes and coins:

…Participants were not informed beforehand that the donating task was part of the experiment. Donating behavior was measured by the amount of money the participant donated. After having received 10 Euros… for their participation in the study, participants were left alone and asked whether they were willing to donate part of their financial reward to charity. Four money boxes (Unicef, Amnesty International, Greenpeace, and World Wildlife Fund) had been positioned on the table.

Here are the results:

As expected, compared to a neutral placebo, [tryptophan] appears to increase the participants’ willingness to donate money to a charity.

The authors mention the “functional and anatomical interactions between serotonergic and oxytocinergic systems” and that “it may be likely that the willingness to donate money to a charity is modulated by the effect that serotonin exerts on oxytocin levels.”

I always like to add my perspectives on studies like this so here goes. We know that because tryptophan boosts serotonin it’s going to improve mood and reduce anxiety, worrying and fears. When you feel better, lighter, happier and calmer you feel like anything is possible and I can see how this could translate to feeling more caring and wanting to be charitable.

Here is the amino acid questionnaire with the low serotonin section.  I’d like to add this new sign to the questionnaire and wonder what would work: Lack of charitability? No desire to give to charity?

One additional comment is that with the work I do, the amino acids are used when you show signs of low serotonin such as anxiety or worry or depression or insomnia or afternoon/evening cravings. I use the trial-response method to determine if you’ll actually respond to tryptophan i.e. experience benefits and how much you will need to see those benefits. I starting dose is typically 500mg tryptophan and I have found the Lidtke brand to be the most effective. You can read more on tryptophan here.

Because of this I’m intrigued with this application of using tryptophan in healthy individuals. But I’d also be cautious based on what I’ve seen with clients who don’t need serotonin support and take tryptophan – they can feel too sleepy or even more sad or more anxious. This would be my hesitation in saying we should give everyone tryptophan in order to create a more charitable and giving society. I do however agree with the authors about the importance of a quality real whole foods diet with adequate quality animal protein, saying the study result:

supports the idea that the food we eat may act as a cognitive enhancer modulating the way we think and perceive the world and others.

We’d love to hear if you feel more charitable and giving when you take tryptophan or 5-HTP (since it also boosts serotonin)?

And if you feel more charitable and giving when you eat a quality real whole foods diet with adequate quality animal protein?